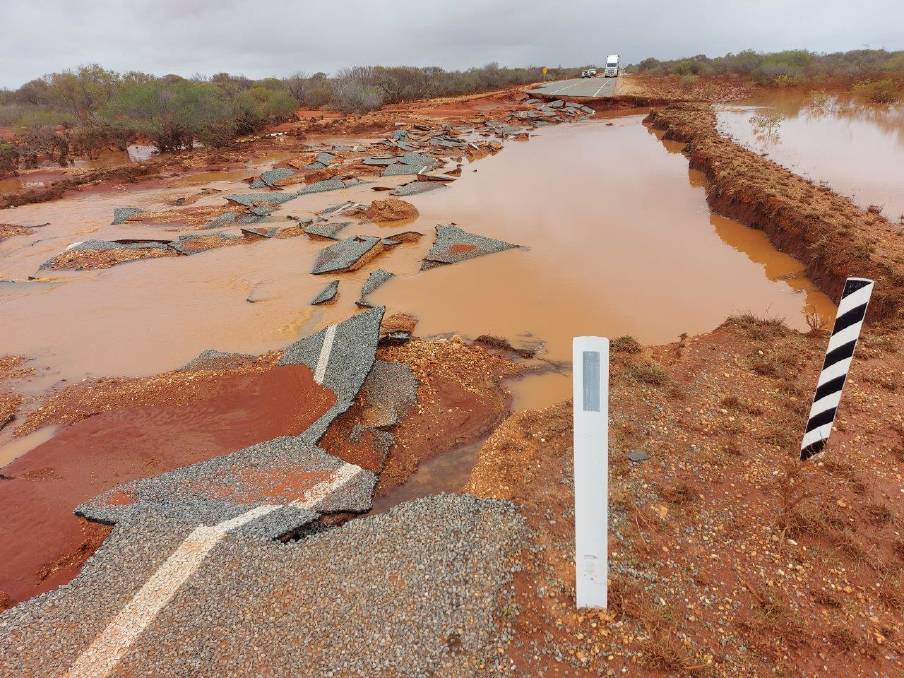 A section of the North West Coastal Highway north of Carnarvon, from the Blowholes through Minilya to Burkett Road, remains closed due to severe damage. Photo by Main Roads.

A 'ONCE in a decade flood' in Carnarvon, half of the North West Coastal Highway near Minilya washed away and road closures throughout the Gascoyne, making it a big week of wild weather for those above the 26th parallel and the clean-up effort has just begun.

The heavy rain was caused by a tropical low, which at one point the Bureau of Meteorology (BoM) thought might turn into a cyclone, that tracked through the Kimberley, into the Pilbara and the Gascoyne, before moving down the coast.

The Gascoyne River peaked at 7.1 metres at Nine Mile Bridge on Saturday morning, slightly below the last significant flood in December 2010, when the river peaked at 7.7m.

BoM spokesman Neil Bennett said in the tropical cyclone season, the number of potential cyclones becomes a big thing that people put a lot of emphasis on.

"But really, a slow-moving tropical low can create as much damage water wise as when a cyclone comes inland," Mr Bennett said.

"With the La Nina conditions, it was anticipated that we would see more tropical activity to our north - that has been the case so far this season and we've got a long way to go yet.

"For the Gascoyne folks, notwithstanding the problems that the floods and the road closures bring, that water is absolutely essential." 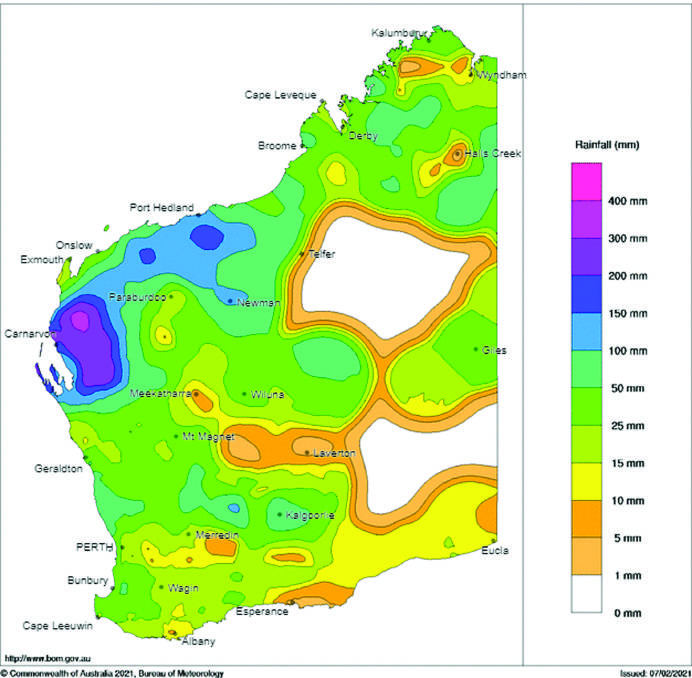 Total rainfall in WA in the week leading up to Sunday, February 7.

More than 200 millimetres of rain fell across just three days, with about 175mm coming down in one day, and while the rain itself caused some minor flooding around farms and local roads in town, the big impact came as the river height increased and caused widespread, major flooding.

As a result, the power went out for between 24 to 36 hours and the road in and out of Carnarvon in both directions closed.

While the flooding and road closures were certainly inconvenient, the downpour of rain has been welcomed by both pastoralists and horticulturalists who were in desperate need of water.

Sweeter Banana business manager Doriana Mangilli said there were some strong winds, including up to 80 kilometre an hour gusts and 40-60km/h sustained winds, which caused them to lose a few bunches and trees.

"As far as production goes, there was a tiny impact due to the wind, but that would have been less than five per cent damage," Ms Mangilli said.

"We were back up and running on Monday, we started packing at 9am and 70pc of our growers did not have flooding on their farms, so they were able to get on with it and start harvesting.

"The bananas love fresh rain, so they will grow really quickly and what we lost we will likely make up for with increased production from the really high quality and low salinity water."

Main Roads has reopened the North West Coastal Highway from the Overlander Roadhouse to Carnarvon which has restored the Carnarvon-to-Geraldton route to the south of the town.

However, it could be next week before a section of the highway north of Carnarvon, from the Blowholes through Minilya to Burkett Road, is reopened as there is about 10 kilometres of road which has been completely washed away with the severity of the floods.

"Some of our freight relies on trucks that have gone north and are coming back down," Ms Mangilli said.

"So we might see some issues in securing freight back to Perth because the trucks aren't coming down from the north, but we're working on that with our transport company at the moment."

The lack of severe flooding around plantations in the Carnarvon area can be attributed to a diversionary flood levee which was built in 2013 after the big flood in 2010. 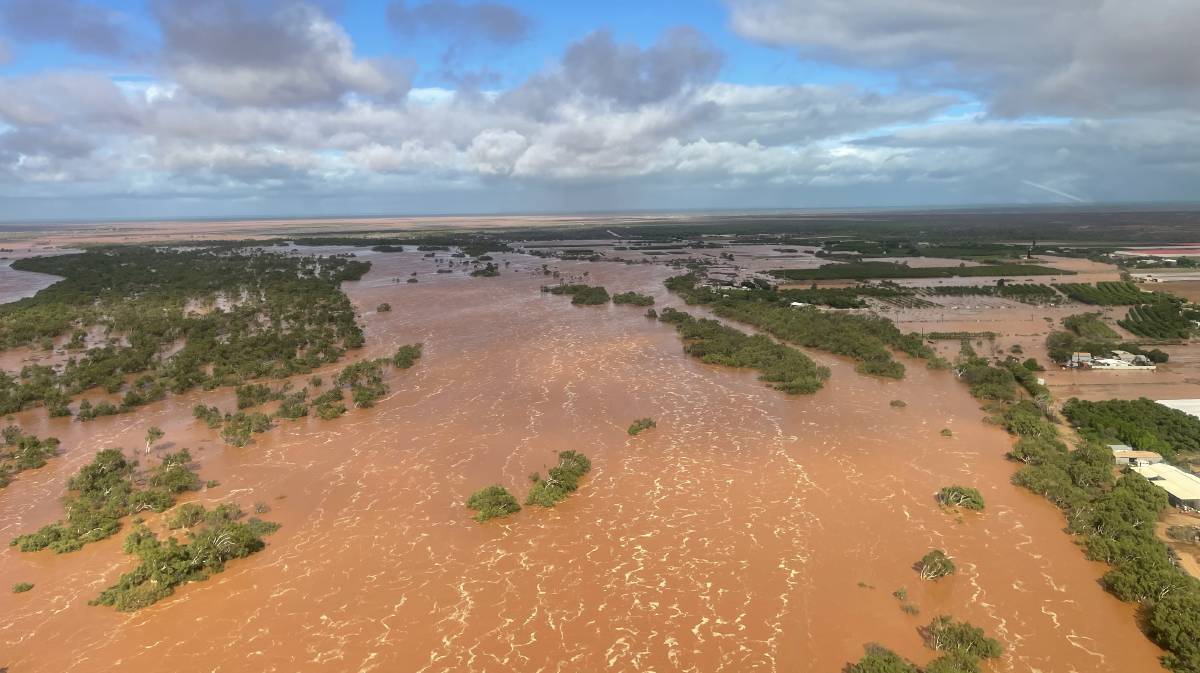 While the flooding was high, a levee built in 2013 which works by slowing the water down appears to have worked. Photo by Vince Catania.

The levee works by slowing the water down, and at this stage it appears to have worked.

The Nationals WA MP for North West Central Vince Catania said this weather event was the first real test of the levee system since it was built.

"From all accounts so far, the levy system has worked for about 80pc of plantation owners who have experienced little to no flooding," Mr Catania said.

"There are still people in lower lying areas that did experience flooding, but that was to be expected, and at the end of the day, we need the rain.

"The rain was very welcome and the river was very welcome as it rejuvenates water supplies for the next two to four years, plus getting 170mm plus in one day gives the ground a good soak which was also needed."