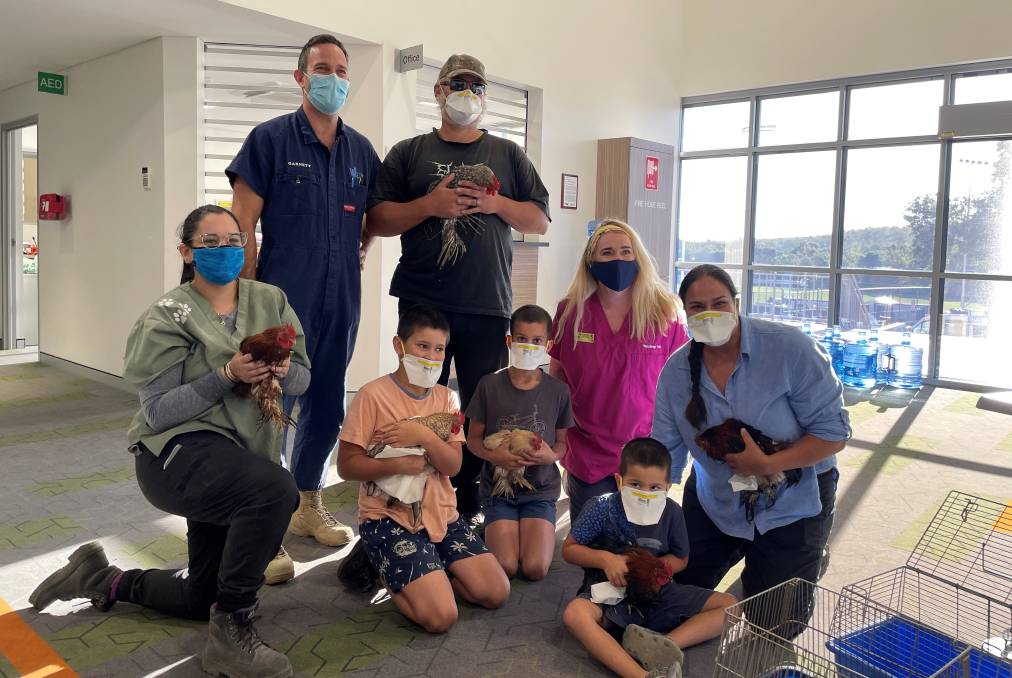 Australian Veterinary Association WA president Garnett Hall (in overalls) with members of the Longbottom family from Gidgegannup, who were reunited with their pet roosters following an assessment visit by veterinary officers of the fire-affected area last week.

The community pitches in to help fire-affected livestock owners

FARMERS, truck drivers, the horse community, veterinarians and volunteers have pitched in to help livestock owners affected by last week's Wooroloo bushfire which destroyed 86 homes and burnt out 10,900 hectares on Perth's north-east fringe.

In a mammoth spontaneous volunteer evacuation, an estimated 500 horses were moved out of the path of the bushfire as it raced 30 kilometres through Perth's 'saddle belt', from its ignition point near Wooroloo about midday on Monday last week to threaten Brigadoon and Ellenbrook by Monday evening and Bullsbrook from Tuesday.

But horses, as the largest and the most common animal in the fire's path, were the major concern, with the Magic Millions Perth centre on the Monday night and through part of last week providing a temporary home to about 305 horses from within the bushfire zone and the extensive area threatened by the fire front.

Similarly, the Muchea Livestock Centre opened its gates to about 230 horses and their owners and about another 100 went through Ian Glading's racing stables in Ascot on their way to other racing stables, pony club grounds, the Claremont Therapeutic Riding Centre and private properties able to take them.

Ramsay's Horse Transport and Grantham Horse Transport volunteered trucks and staff to help rescue horses in danger, to move others out of risk areas and then later last week return them to their paddocks.

Farmers with stock crates and volunteers towing horse floats raced to rescue livestock, some risking their lives to move animals from burning paddocks between Gidgegannup and the Avon River.

Realising how quickly and unpredictably the fire was moving, many owners relied on friends and family to help them move animals to safety as soon as their area was included in the blue alert zone on the Department of Fire and Emergency Services (DFES) fire map, before returning to defend properties knowing their animals were safe.

Others chose to camp with their animals at Magic Millions Perth, Muchea Livestock Centre, Claremont Therapeutic Riding Centre and the two showgrounds.

Caravan Industry Association WA members provided up to 50 caravans as temporary accommodation at the Claremont showgrounds.

They were accompanied by Department of Primary Industries and Regional Development (DPIRD) officers and City of Swan and Mundaring Shire rangers and emergency services personnel. 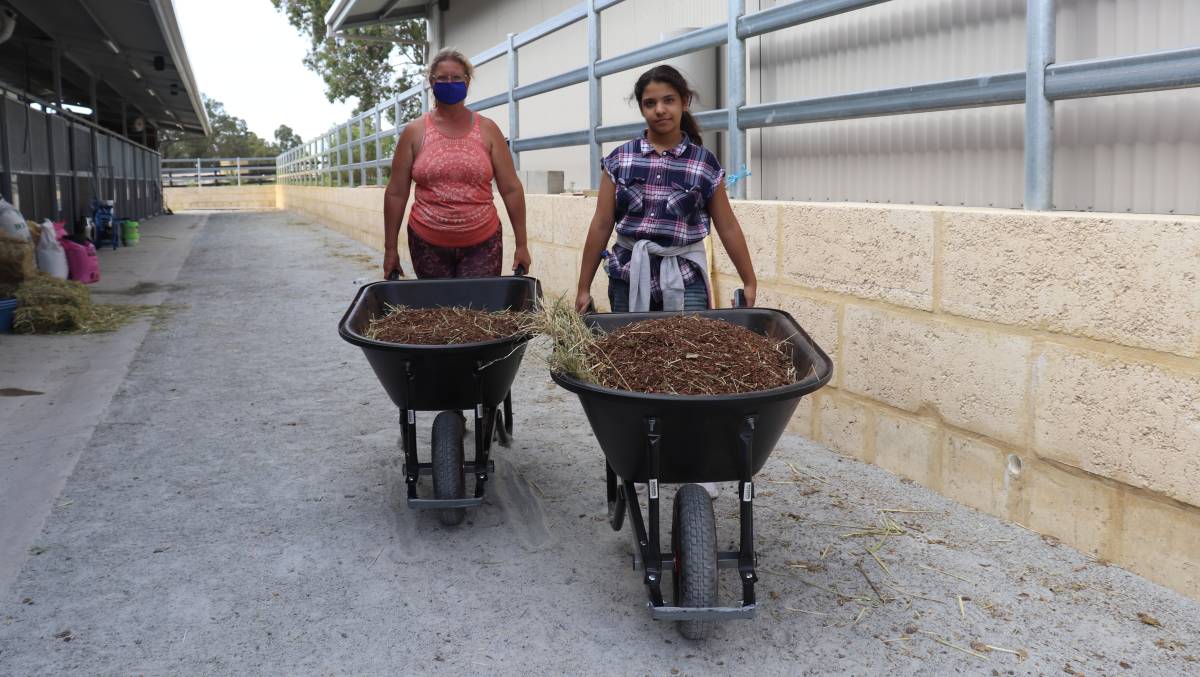 Naomi Konkoly-Fripp, Gypsian Sands Stud and Fellantree Rural Services, West Bullsbrook, with her daughter Sabrina, 11, cleaning out stalls at the Magic Millions Perth complex in the Swan Valley on Friday where 32 of her own horses including Gypsy Cobb stallions and pregnant mares and another 17 horses agisted with her, were temporarily accommodated while the Woorooloo fire threatened Bullsbrook.

They assessed some 750 animals on the fireground, including native wildlife.

Most were unharmed, some were removed because they no longer had feed or water available, some were treated for burns on muzzles and legs and three horses were taken to The Animal Hospital for ongoing treatment for burns.

"DPIRD has worked closely with the Australian Veterinary Association WA branch and private veterinarians and veterinarian nurses to operate a triage area at the (Mundaring) control centre and to complete assessments of impacted properties with animals in the City of Swan and Shire of Mundaring," Ms I'Anson said.

"This has involved up to 40 people each day, many who volunteered their time.

"DPIRD also worked with the City of Wanneroo to assist them to open the Wanneroo showgrounds as an animal evacuation point to house livestock and domestic animals impacted and displaced by the bushfire.

"This centre was very well utilised during the response and has now been stood down as owners have found alternate arrangements for the care of their animals.

"Veterinary teams have visited impacted properties with about 750 animals and wildlife assessed and/or treated.

"The majority of animals and wildlife were found alive and well." Trevor Blight, Dandalee Park Dairy Goats, Lower Chittering, with some of the 80 goats he and partner David Sawer and friends moved to the Magic Millions Perth sale complex in the Swan Valley out of the path of the bushfire.

Peter Warby, of Warby's Transport, Pumphrey's Bridge, was one of the many from rural communities who instinctively sprang into action on Monday night to help fellow farmers and livestock owners affected by the bushfire.

With help from Livestock and Rural Transport Association WA - he is a committee member - and Farmers Across Borders - a group of generous farmers and truckies - Mr Warby organised a hay run to Wooroloo on Sunday.

Fourteen trucks from Mayanup, Kojonup, Northam, Wagin, Narrogin and at least four from the Pingelly, Williams, Boddington and Wandering area delivered 621 fodder bales - rounds and big squares - to a farm at Wooroloo to be distributed throughout the burned area.

Mr Warby said the convoy formed at Pingelly CBH site on Sunday morning, then travelled up the Great Southern Highway to York and on to a rest stop at The Lakes, before continuing to Wooroloo to unload.

The farmer receiving the donated fodder moved machinery out of his shed so most of it could be stored under cover until it is distributed.

"One truck came from out at Dunn Rock past Newdegate, so he drove 300 kilometres just to join the 160 kilometre hay run," Mr Warby said on Monday.

"We haven't done a final tally yet, but 30 to 35 farmers donated hay and two hay companies chipped in.

"We picked up 40 tonnes of export hay at one place."

Mr Warby said a group of farmers and truckies realised early last week that fodder for stock would be needed after seeing the ferocity and spread of the fire on news reports and the organising of the hay run kicked into gear.

"We put the word out on a truckies Snapchat and a Whatsapp group, but the logistics took a bit of working out - about 80 phone calls a day for five days," Mr Warby said.

He said the fodder, the trucks, the fuel and the drivers' and loaders' time for the hay run was donated.

Magic Millions Perth manager David Houston said he initially expected an influx of 30 to 40 horses at the centre, but by Tuesday of last week there were 305 horses, plus some alpacas and 80 goats. 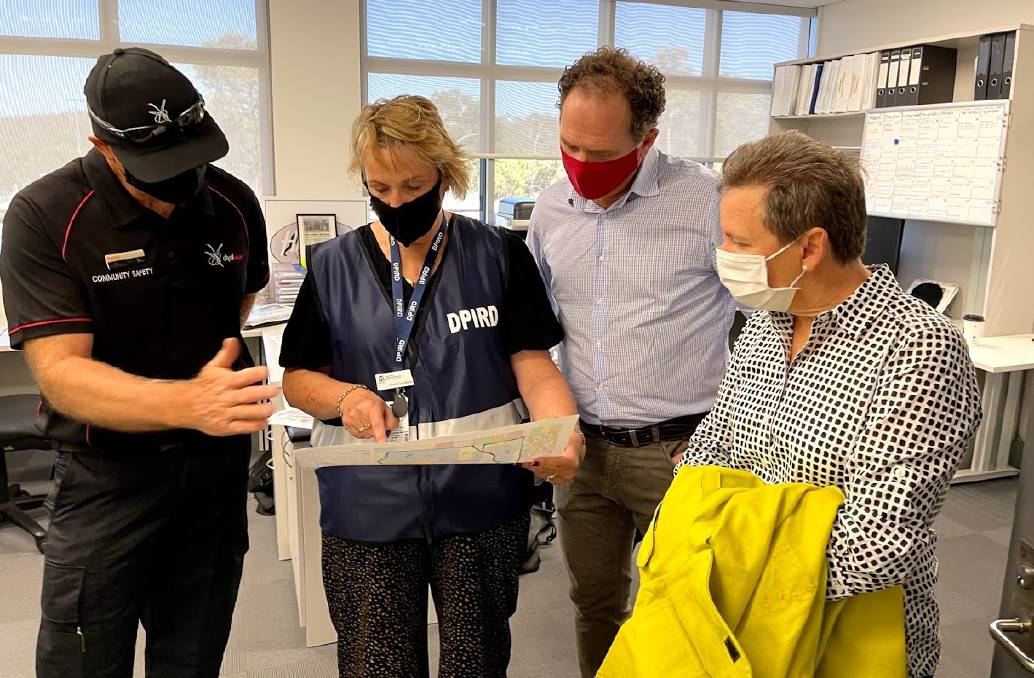 "On Monday afternoon I was getting ready to knock off - I actually had it in my mind that people might need some help - when Kevin Bailey, the City of Swan mayor, rang me and asked if there was 'any chance of putting a few horses down there because of the fires?'" Mr Houston said.

"The horses rushed in during the night - I rang a couple of mates and we worked right through the night, directing the trucks and floats, unloading horses and getting them into boxes.

"A lot of people were coming and going - they were distressed and worried about the situation - but we got them all placed and the people were able to go back to their properties and concentrate on defending them.

"The main thing was to get the animals out of danger.

"We've had masses of donations - there's plenty of hay and mixed feeds for the animals, apples and carrots as well as comfort packs and different things for their owners and their children and people bringing food for them.

"Some people have camped here in tents outside the stables - some of them couldn't get home.

"First and foremost, we're all horse people so the last thing we want to see is anyone lose their horses.

"While this facility is required in a couple of weeks (the Perth 2021 Yearling Sale will be held there February 18-19 with inspections from Sunday), it was certainly empty on Monday night and it was good to see that it's been of use to the community," he said.

Lower Chittering goat breeder Trevor Blight, Dandalee Park Dairy Goats, and his partner David Sawer did not take any chances with the bushfire. 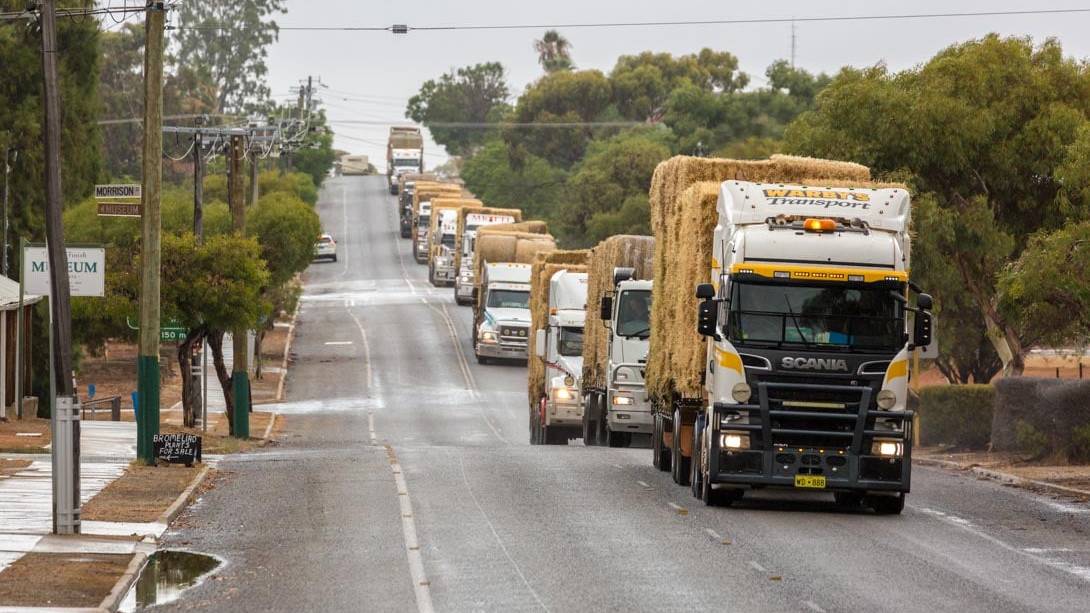 They used a former ambulance towing a horse float and a friend with a stock truck to move their 80 goats - mostly Nigerian dwarfs - two dogs and themselves out of danger to the Magic Millions Perth centre.

Back home on Saturday, Mr Blight put up a post on Facebook which summed up the feelings of many grateful animal owners.

"Thanks again to Dave Robinson for moving over 50 of our goats with his truck.

"Also huge thanks to all the volunteers that helped us load, provided meals, coffees, donated stockfeed and other items to everyone in need.

"You are all saints in my opinion."