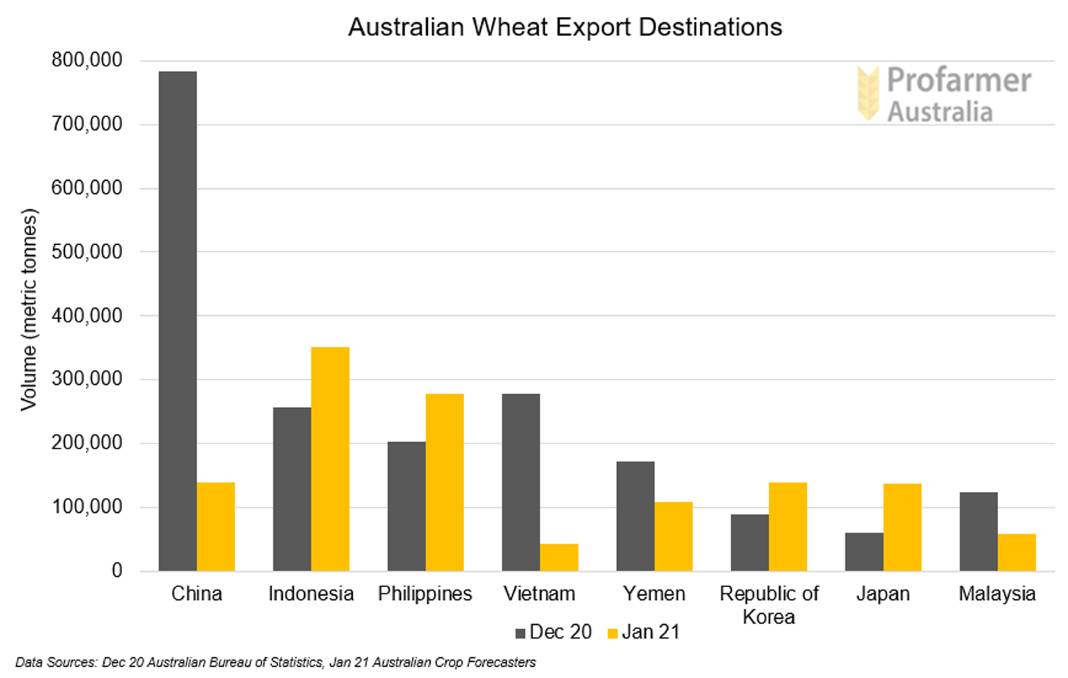 Australian wheat production for the 2020/21 season has hit a record high of 33.7 million metric tonnes

AUSTRALIAN wheat production for the 2020/21 season has hit a record high of 33.7 million metric tonnes according to the recent crop report from Australian Crop Forecasters.

With such large production one much ask, where is all this wheat going?

The Australian Bureau of Statistics bulk export figures show that 782,499 metric tonnes of Australian wheat made its way to China in December 2020.

This high export tonnage is an indication that despite trade tensions, Australian wheat was still in demand in China.

In January, wheat exports to China dropped off significantly (perhaps a sign of deteriorating trade relations), with exports to Indonesia and the Philippines picking up the slack.

Australian Crop Forecasters have tracked January 2021 bulk grain shipments and found 351,450mt of Australian wheat was exported to Indonesia, seconded by the Philippines with an estimated 279,000mt.

Australian Bureau of Statistics January export figures have not been released yet, but it is likely they will tell a similar story.

Strong exports into China and other South East Asian countries shows that Australian wheat is pricing competitively against other origins to secure business.

The high level of feed wheat exports also shows that the appetite is there to use wheat to fill the feed deficit in conjunction with, or rather than, other grains like corn.

This is partly due to the availability or lack thereof of other grains.

While global wheat ending stocks are estimated to be at an all-time high, world corn stocks for the 2020/21 season are the lowest they have been in five years.

An interesting case study in this regard is South Korea.

Since the start of February 2021, 266,100mt of wheat and corn has been booked on South Korean tenders for May-June shipment.

Of this, only 28,900mt is reported as being Australian origin wheat and the majority is corn from South America.

Price is important and the challenge for Australian wheat exports in the future is whether Australian grains can remain competitive with corn production increases in South America as practices and technology improve.

Another factor that is likely to influence demand for Australian wheat exports in the next couple of months is the condition of the United States winter wheat crop.

A cold snap is currently moving across the US Southern Plains, the hard red winter wheat cropping area, and is potentially going to increase the percentage of crop in poor condition.

If this eventuates, then we may see lower production estimates for the 2021/22 US wheat crop and therefore lower exportable surplus which could benefit Australia.

United States and Canadian wheat are currently competing against Australian to secure business into Asia, most notably Japan.

Of the Japan Ministry of Agriculture, Forestry and Fisheries (MAFF) tenders announced since the start of 2021, Australian wheat has made up 132,923mt.

Meanwhile, 409,448mt of Canadian and US wheat combined have been booked.

While it is important to note that different grades have been sourced from different origins, price is still dictating the quantity and timing of purchases so continued demand for Australian wheat is likely to be influenced by the condition of northern hemisphere crops.