It was a big day at Boyanup last Thursday for the MacLeay family and their Blackrock Angus stud,

IT was a big day at Boyanup last Thursday for the MacLeay family and their Blackrock Angus stud, Vasse, when they recorded one of their best ever annual sale results.

Once again the family yarded an outstanding catalogue of 58 bulls that reflected the stud's breeding focus on docility, fertility, growth and with 83 buyers registered at the sale and another 50 registered on AuctionsPlus from New South Wales, Victoria, South Australia, Queensland, Tasmania, the Australian Capital Territory and WA, the writing was on the wall for a strong result even before the sale got underway.

And when the sale commenced the buyers, who were full confidence after receiving record cattle sale returns, certainly didn't disappoint in their bidding as they placed bids thick and fast right through the catalogue, keeping the Elders auctioneering team, led by auctioneer Nathan King, on their toes all day as they tried to keep track of where the bids were coming from.

By sale's end the selling team had cleared all 58 bulls offered under the hammer to 38 different commercial buyers, who came from as far away as Condingup in the south east to New Norcia and Dandaragan in the north, at an average of $9151, which was up $2924 on last year's sale.

In comparison, at last year's sale the MacLeay family offered 60 bulls and sold 55 under the hammer at an average of $6227.

Along with the strong support from buyers in the stands, there were 51 online bids placed on AuctionsPlus across 12 lots, resulting in nine lots being knocked down to three different online buyers which helped the sale result.

Mr King said it was a terrific sale for the MacLeay family and ranked as one of their best ever.

"It was a great even line-up of Angus bulls, backed by top genetics and they were a credit to the MacLeay family," Mr King said.

"There were plenty of comments presale that it was the best and most even team put up by the stud and this was certainly reflected in the final sale result.

"There was a good selection of bulls to suit all buyer requirements including a good line-up of bulls suitable for heifer matings, which not only had low birthweights but also positive fats and good EMAs and growth figures.

"The sale was strong throughout with plenty bids coming on all the bulls.

"When you have more registrations than bulls on offer, you know it's going to be a reasonable sale and that was certainly the case today."

With an extremely even line-up of bulls throughout, there were a number of bulls that could have sparked strong buyer interest and this was certainly the case with 20 bulls or 34 per cent of the catalogue selling for $10,000 or more. But the one that sparked the biggest interest was Blackrock Q96 in lot one.

Mr King took an opening bid of $10,000 on the soft, deep bull and the price quickly rose from there, surpassing the $20,000 mark in a flash before bids slowed and two buyers battled it out.

In the end the son of Landfall Keystone K132 and Blackrock M121 was knocked down to return buyer Jim Giumelli, Darwonga Investments, Dardanup, at the day's $24,500 top price, setting the tone for the rest of the sale.

Mr Giumelli said he inspected the Blackrock team on-property before the sale and picked Q96 out straight away.

"I have been told by a lot of people since then he is the best Angus bull they have seen this season, which gave me a lot of confidence to buy him," Mr Giumelli said.

"He has great thickness and length plus a really good hindquarter.

"But more importantly he has really good docility which is very important to us as we run a really quiet herd.

"On the figures front he has a moderate birthweight and the good 200 and 400-day weights we want.

"His bloodline was also an attraction, as it will be a new one for our herd."

Along with having great eye appeal, Q96 also has an impressive set of Estimated Breeding Values (EBVs) to match, ranking it in the top 10pc of the breed for a number of traits. 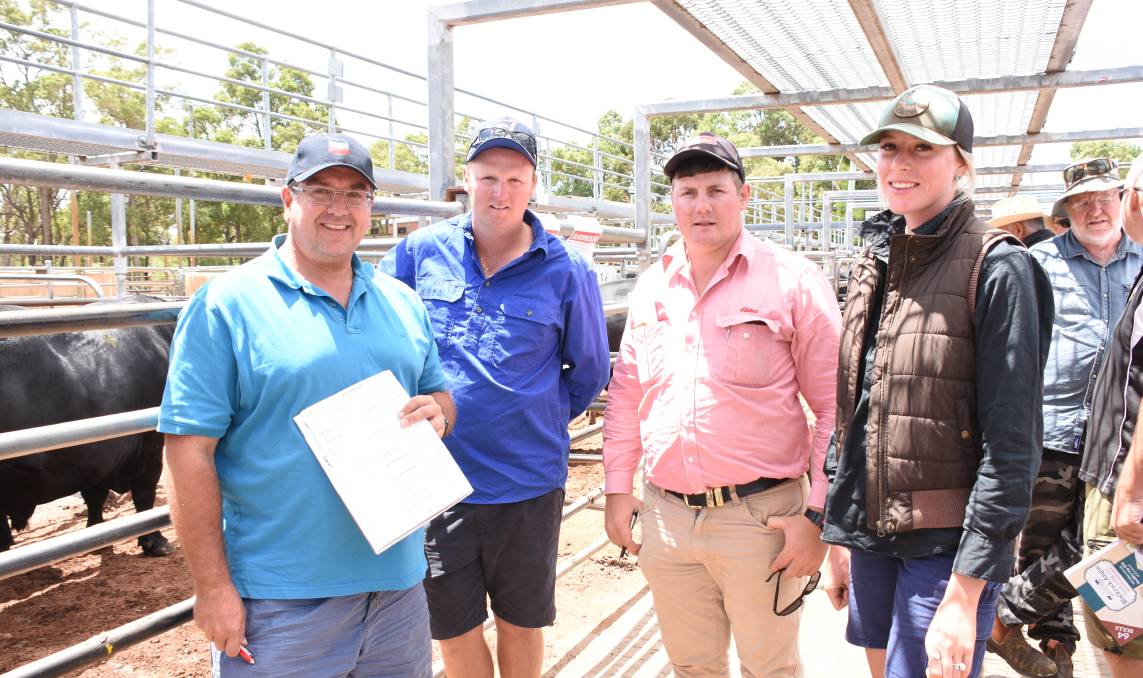 Mr Giumelli runs a breeding herd of 120 Angus breeders which calve down in late April/May.

Traditionally the operation has held onto its steer calves and grown them out on grass before selling, but Mr Giumelli has this season decided to sell all his steer calves as weaners and retain the majority of his heifer calves.

"Our aim is to mate all the heifers and then pregnancy test," Mr Giumelli said.

"We will keep the best as replacements and then sell the rest as PTIC heifers because of the increasing demand for quality breeders," Mr Giumelli said.

The second highest price bid was $18,500 for Blackrock Q136 in lot three when return buyers Mark and Graham Darlow and family, Darlow Pastoral, Condingup, purchased it via the AuctionsPlus platform.

Mark Darlow said they used the AuctionsPlus platform to buy this year as they couldn't get over to the sale and they relied on members of the Nutrien Livestock team to help inspect the bulls in the flesh.

"Our agent Darren Chatley inspected the bulls a couple of weeks ago and picked some out for us and then we looked at the videos online of those bulls to decide what we wanted and then for a final check before we bid, we got Leon Giglia to have a look over and make sure they were all good," Mr Darlow said.

"We liked Q136 as he is a nice, thick, soft bull and has a good balanced set of figures.

"We were also chasing his bloodline as it will be a new one for our herd."

Mr Darlow said Q314 also impressed them as it was as soft as butter and was a very thick, deep bull.

Mr Dalow said they continued to return and buy from Blackrock because the bulls have fantastic temperaments and good feet.

"They are also soft and easy doing and they breed the type of cattle which suit and perform in our environment," Mr Darlow said.

"The heifers we are breeding from the Blackrock genetics continue to get better every year."

The five bulls will join the operation's sire battery to be used this joining season among 1070 Angus breeders for calving that commences at the beginning of March.

Calves are weaned in December and then the steers and heifers surplus to requirements are sold in mid-January to Wheatbelt lotfeeders.

This season the 434 steers they sold averaged 340 kilograms curfewed when weighed in early January.

Q57 is sired by Millah Murrah Loch Up L333 and in the ring it showed off plenty of growth and muscling as well great temperament which was backed up by a strong set of EBVs.

James Bowie said the operation had been buying from the stud for the past three years and have been impressed by the progeny of the Blackrock sires they have purchased.

"They are great breeding bulls and they all have a good shape and are quiet," Mr Bowie said.

When it came to Q57, Bowie Beef farm manager Matt Fairbrass said it was a good all-round bull with really good growth.

"We were also chasing a new bloodline for the herd and he ticked that box as well," Mr Fairbrass said.

Along with securing Q57 the Bridgetown operation also purchased a son of Karoo Knockout, Blackrock Q135, for $9000.

The Bowie family joins between 1000 to 1100 breeders for a March/April calving and their aim is to wean and sell the majority of its calves at eight to nine months old, either through the saleyards or direct to lotfeeders.

This season they weaned 100 steer calves early and sold them in the WALSA Boyanup weaner sales in November, while the rest of their calves were weaned in mid January with 500 steers averaging 365kg and their heifer line 355kg.

Along with the buyers mentioned who purchased multiple lots, there were another 11 buyers to purchase two or more bulls including four who purchased three each.

One of these were first time buyers David and Joan Cook, Noondel Grazing Co, Dandaragan, who purchased three bulls at an average of $9583 and to a top of $11,000 paid for a Blackrock N99 son that ranks in the top 5pc for gestation length and top 10pc for calving ease daughters, birthweight, rib and rump fat as well as docility.

Mr Cook said they were at the sale looking for new genetics for their breeding herd which was mainly Angus.

"We saw videos of the bulls online and looked into their background and figures and liked what we saw, so we decided to come down to the sale," Mr Cook said.

"We wanted bulls that were docile, had good calving ease, good carcase traits and a medium frame which are all important traits to our operation as we sell direct to butchers."

The Cooks annually turn off 650 owner-bred and purchased in yearlings off grass at 18 months direct to butchers under their Dandaragan Organic Beef brand.

Another to take home three bulls to a top of $11,000 and an average of $9500 was return buyer of six years Chris Wringe, MJ Wringe & Son, Donnybrook.

Mr Wringe said he has been really impressed with the Blackrock bulls and their progeny.

"I like the temperament of the bulls and their longevity," Mr Wringe said.

"They are also producing a good even line of calves for us.

"Today I was chasing bulls with good growth to breed calves suitable for the feedlot market."

"We are in the process of changing over from breeding a vealer calf for the supermarket to a calf for the feedlot," Mr Wringe said.

This season the operation sold 166 Angus calves (50pc steers and 50pc heifers) to a feedlot in November at an average of 335kg.

Also taking home three bulls was Geoff Keilman, Lilyvale Grazing, Pinjarra, who was buying from the stud for a third time.

Rounding out the buyers to purchase three sires in the sale was another Western Australian buyer operating on AuctionsPlus who averaged $8667 for their selections that topped at $10,000.