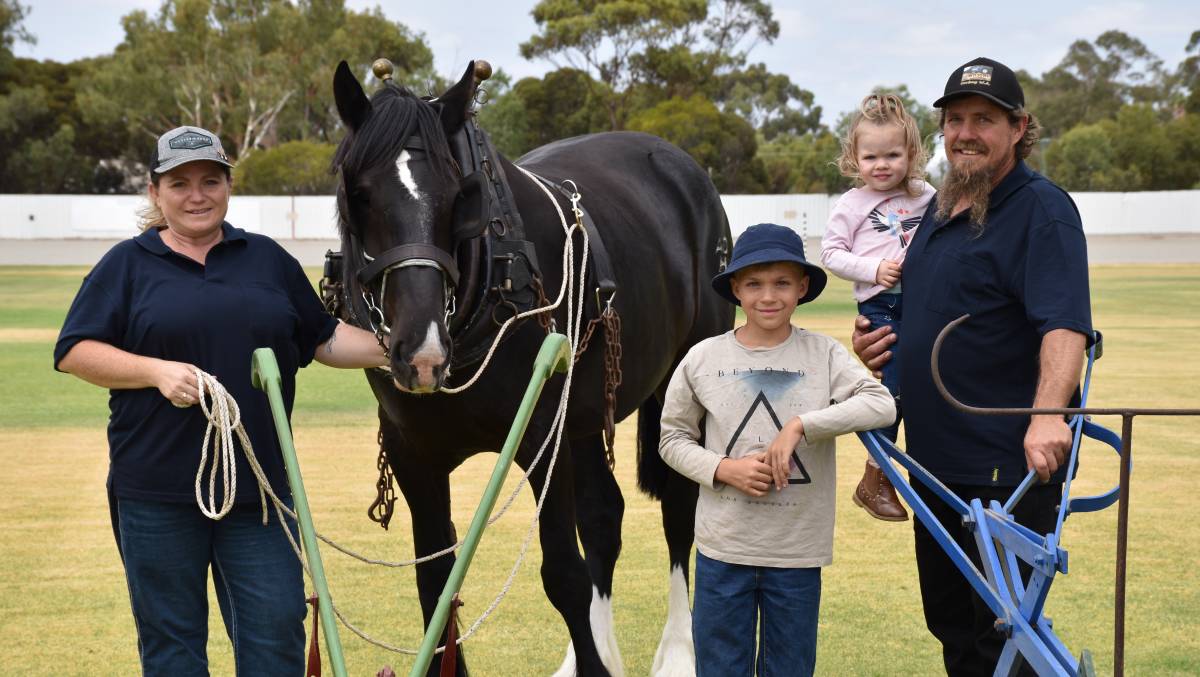 Bakers Hill couple Bec Evans and Dave McKay and their children Rhys and Ivy will be a major highlight at Woolorama with their Australian Draught Horse mare Marlie Betty demonstrating horse-powered farm machinery.

Take a step back in time at this year's Wagin Woolorama

THERE will be few people, if anyone at all, who could say they have seen an operating horseworks, but at this year's Make Smoking History Wagin Woolorama one display will give a fascinating insight to an era that pre-dates even the oldest stationary engines.

A rotary horseworks is operated by a horse or a team of horses walking in a circle to turn a gear-box powering belt-driven stationary farm machinery, such as a threshing machine, chaffcutter or a butter churn.

They were used on Australian farms from about 1850 until World War I before being replaced by small internal combustion engines.

It is hard to believe anyone would pursue an interest in such an obscure area and even more astounding they should be able to find relics of early agricultural times in such good working order.

The fact Dave McKay and Bec Evans could even find a trained young Australian Draught Horse mare shows how much some people treasure our pioneering history.

The Bakers Hill couple has combined Ms Evans' love of horses with Mr McKay's passion for vintage machinery and they are keen to show others how things worked in the olden days.

Their horseworks is an extremely rare Bentall, circa 1850, that is in working condition and while Mr McKay has met old timers who have seen the machines lying around farms, he has never met anyone who has seen it operating.

While it may seem archaic in comparison with electricity, horseworks was an improvement to operating equipment by hand, relieving families - usually women and children - of a laborious task.

The contribution of horses, and even bullocks, to pioneering Australians was enormous but today heavy horses are a token of the former population.

Over the years, the Australian Draught Horse developed when the four recognised pure draught horse breeds - Clydesdale, Percheron, Shire, and Suffolk Punch were bred with lighter horse breeds and then in 1979, the breed was officially established as a stud society.

The Marlie stud, in New South Wales, was started in 1973 by Pat and Sid Samuel, who bred and worked Draught Horses and now grandson Alecks continues to farm with horses and competes in ploughing and draught horse pull competitions across NSW.

Such competitions are completely foreign in Western Australia, so Ms Evans and Mr McKay turned to Marlie to buy their four-year-old mare Betty.

Ms Evans said they had been searching for years to find a suitable horse.

"We are interested in anything farming or belt-driven," Ms Evans said.

"We wanted a horse that could be worked with horse drawn machinery rather than an animal that only pulled a cart or buggy and we were lucky to get the right horse for what we wanted.

"I kept pestering, saying I needed a trained horse because no-one could train one for this type of work in WA and eventually Alecks said due to the drought he was prepared to sell Betty.

"She is the only registered Australian Draught Horse in WA and we are the only WA members of the society.

"In NSW she worked in a team to plough, cut hay and farm the land and did quite a few big competitions and displays in NSW and for such a young horse she is super quiet and we are making sure we are taking good care of her."

Once they found the right horse it inspired them to go looking for the right machinery.

They hunted for years and have accumulated a good collection in working order and original condition in the past six to seven years.

They scoured the internet, searched farms and had some lucky finds but most of the equipment has come from an old farmer who worked his horses on most of the gear they have.

The couple took the display to two public events before COVID-19 halted their plans and Woolorama will be one of their first outings.

They will bring an English-made R Hunt & Co roller mill for a working demonstration as well as an International grister to process wheat and a 1924 two-knife HB McKay Sunshine chaff cutter.

The chaff cutter still has its original timber frame, unlike many others that have been eaten out by white ants.

The most challenging part has been practicing how to set up and operate the machinery.

"We are relatively new to it but the horse isn't and she is sort of teaching us as we go along," Ms Evans said.

"When we put on a display there is a lot to pack and set up and we need to make sure we get it right on the day."

Look for their display in the 600s lawn area where they will put on 30-minute working sessions over the two days and the public are welcome to talk to them about the machinery and Betty.

"We would love to keep this tradition alive in WA because most of the old people who know about these things are passing,'' Ms Evans said.

"In NSW it is hugely popular with many more heavy horses, heaps more gear, competitions and interest.

"When we put on a display, we meet 80-year-olds who say they've seen the gear lying around on farms but never knew what is was for and they are amazed to see what it does.

"Children are particularly interested in what we are doing."