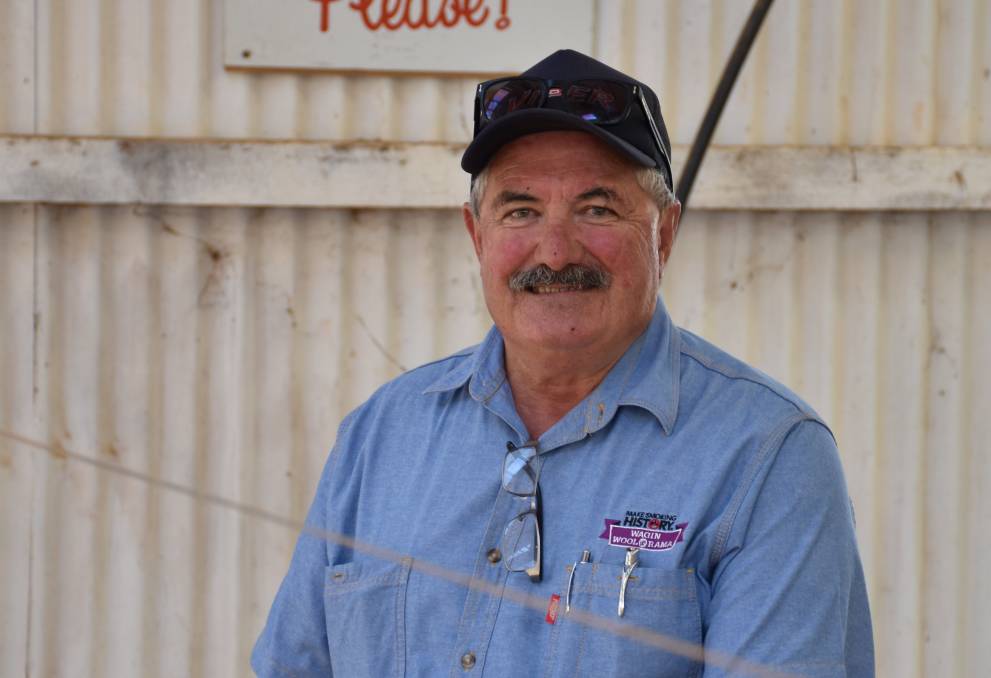 Merino section head steward Peter Foley has not changed his section but has still encountered plenty of change this year. A water shortage has been one of them.

A big prize pool for the Merino section at this year's Woolorama.

AN estimated $40,000 in cash and kind will be on offer in the Merino section at the Make Smoking History Wagin Woolorama for 2021.

It is a huge prize pool that has delighted section head steward Peter Foley, who has aimed to make it one of the richest and most professional Merino shows in Australia.

The high regard in which the event is held was borne out this year when the section retained all its existing sponsors in an economic climate made more difficult by COVID-19 and the merger of two major stock firms, Landmark and Primaries.

The company now established as Nutrien Ag Solutions combined the former donations from both businesses, ranking it among the elite list of Woolorama's 2021 platinum sponsors.

It also means the WA Merino Exhibitor of the Year, run in conjunction with the Perth Royal Show, will continue as it has in the past with Nutrien donating $1000 to the exhibitor gaining the highest number of points in the wool and Merino sheep sections at Wagin and Perth.

Classes remain the same as previous years and about 200 nominations are expected, but this year studs have been encouraged to nominate via the online SuperShow system to make it easier for officials.

There also has been one other change made due to COVID-19.

Trophies have been an evolving issue over the years with winners walking away with the likes of a sandwich press or a dinner set, but year-on-year as the same items were accumulated in winners' cupboard the men took a stand two years ago and declared farm tools would be a more appropriate prize.

This year instead of tools the major winners will receive cash and to ensure a good photo opportunity for the media, they will be presented with an oversize cheque to fill the gap between socially distanced handlers, judges and sponsors.

There will still be a few major exceptions such as the motorbike donated by Farm Weekly and Elders, the Universal Feeder for the grand champion lamb and the traditional silver trophy group events.

The absence of trophies has been a bit of a blessing in the small and cluttered onsite office with Mr Foley saying in some ways cash has an advantage because more than likely it will be spent elsewhere on the show grounds.

The Merino section will present one of the biggest challenges in complying with COVID-safe rules and all the stewards have completed a course.

With Woolorama being the first major show to be held in the past year, what happens there will be both a learning curve and a demonstration of what it takes to run a COVID-safe show.

Exhibitors have been asked to prepare themselves before they arrive.

They must bring their own handlers and it will be made clear in the judging ring that handlers must only handle one-family's sheep and not swap between sheep from different studs.

For the first time ever there will be no interstate judges.

Instead, three local judges and two young associate judges have been invited and Mr Foley said COVID-19 also had brought changes that will be everlasting.

"COVID-19 and social distancing has made us more digitally aware and this will be the future," Mr Foley said.

"This is an Irish innovation that Amy Kippin (Woolorama secretary) has been working on and we are the first show in Australia to take it on.

"It has cost Woolorama a bit of money to set it up but it will be beneficial to volunteers, people in the office and it will help us to go digital in the years to come and that is important.

"We need to have a big digital screen so stewards can key in the results on their phone that is linked to the screen and they are displayed immediately and there should be an app, so a person sitting in the grandstand can look it up and have a copy of it and the media has a copy instead of us relaying it.

"We are working on that.

"It is all manually jotted down and requires two people in the office.

"Adopting this at a time of COVID has made us all more digitally aware and I think it will take us way ahead of other shows."

A new sponsor in the section is Johnson Property Group, which has agreed to provide the stewards' shirts.

The business also will be the first to be allocated commercial space in the Merino pavilion in a move that will ensure aligned businesses are located close by and it will set a precedent for others to take up space in the future.

One final difficulty the section has encountered has been the lack of water.

The shire council advised the society in early February of a shortage and the agricultural society has had to purchase water to green-up the judging ring for early March.

While the committee was pinning its hopes on the major tropical weather system to deliver rain in early February, retired head steward Kevin Ball has regularly had a hose in hand to ensure the lawn will look fantastic even if costs a bit.