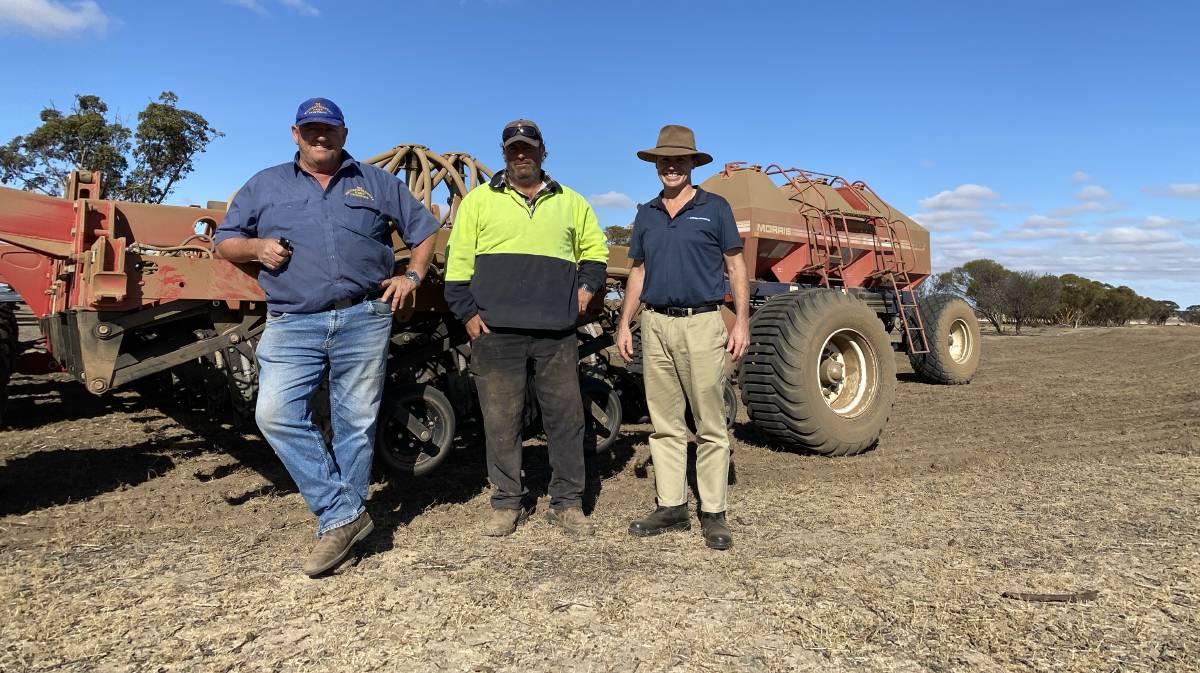 Upgrading a seeding bar has allowed for earlier sowing.

DESPITE having a turn of the century air seeder, a strong focus on accurate seed placement meant the Crombie family at Babakin recently decided it was their much younger seeding bar that needed upgrading, allowing for earlier sowing and improved crop establishment.

Rohan Crombie, together with his wife Sharon and parents Will and Lorraine, farm about 3600 hectares including leased land between Corrigin and Bruce Rock.

They crop about 2300ha to wheat, barley, canola, lupins and oats for hay, as well as serradella and clover pastures, which help support a Merino flock comprising 2500 grown sheep, 30 per cent of which are mated to Suffolk sires for prime lamb production.

Some of the land is double cropped and other areas follow a year-in/year-out rotation.

A wheat-barley-pasture program is used on heavy to medium country at the home property, 'Windsor Downs', with lupins and canola included on the medium to light leased land.

The Crombies have been long-time fans of Morris seeding gear, running a 7252 tow-behind air cart from the late 1990s, coupled to a more than decade old, 12-metre 9000 seeding bar.

The air cart recently enjoyed a major update, with all the metering units and pipes replaced with new stainless-steel items.

"We can plant canola and serradella and get down to 2-3 kilograms accurately with the Morris box,'' Rohan Crombie said.

"It is metering well, so we wanted to get the bar and seed placement right.

"We were looking to go to a hydraulic tyne and then when we saw the Quantum bar, we loved the flotation, with the wheels on the outside of the frame.

He said the frame was well designed and had shown a solid performance with the heavy country.

The 12m Quantum air drill is set on 25-centimetre (10-inch) tyne spacings and uses a Primary Sales boot with Groundhog point and a dual shoot system for deep banding urea. 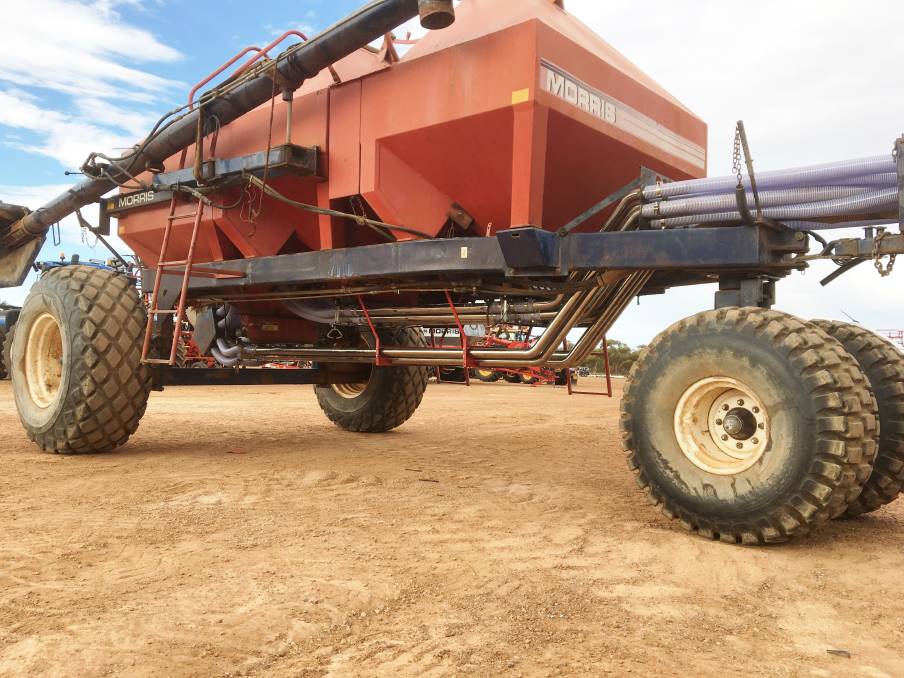 "We've been ripping into stuff that hasn't been worked and it's gone well.

"Where we couldn't get in with the old bars until it rained, we are now quite comfortable to start and go.

"It has given us the flexibility to seed whatever paddock when we want to - and the ability to go dry and utilise rainfall.

"On the old bar, the tynes with 400-pound breakout would ride back in the heavier clays and tighter gravels and throw the seed placement out.

Mr Crombie said the option of Morris Auto-Pack for correctly closed and packed furrows, as well as Auto-Lift for automatic lifting and lowering of tynes at the end of run lines, using the Topcon X25 controller linked with their John Deere guidance, was brilliant.

"You can set the outside boundaries and it will lift itself and, being mixed country, you can see the bar adjust itself with the packing," he said.

"In heavier clays, you can get good seed-to-soil contact - and with the medium country.

"It's a learning game on how much you should pack.

"We are working with 40-80kg of packing pressure and will look to work out what's best.

"We hope to gain some yield if we do it right.''

Mr Crombie said they were very happy with the seed placement and following crop germination and establishment last year.

"We really think it's helping on some of the heavier country, where we haven't been getting into it," he said.

"Other people are probably finding too with hydraulic tynes - to start when you want, put the seed where you want, with the packing to have a good seedbed with no air around the seed - it's helping.

"We had 136 millimetres (of rainfall) for the growing season and were really happy with the yields.

"Our wheat yields were on the average, barley and lupins were above average and canola was similar.''

Mr Crombie said support from McIntosh Distribution and the company's Duncan Murdoch around the set-up of their Quantum air drill was "second to none''.

"Duncan knows tillage and the set-up to suit our country and the back-up was tremendous," he said.

"We've never had a person so thorough.

"He did a lot with the upright air kits to have them set up on our bar and, in the end, it was one of the biggest things with the sale.''

The upright air kits are an Australian-designed and made product delivery system available with the latest Morris drills, allowing easier configuration with bars.

The high-end kits comprise extensive use of stainless-steel, allowing the lowest levels of friction and, thereby, significantly reducing the energy requirement to move product through the system.

He said having an experienced technician on call was a big help through the season.

"They would help us through any questions and that was quite good," Mr Crombie said.

"We also had a few of the guys come and sit on the tractor."