THE Koojan Hills Angus and Melaleuca Murray Grey on-property bull sale at Manypeaks on Monday was one for the ages as prices hit a high of $20,000 for an Angus bull and the sale average surged passed $10,000.

In the sale the Metcalfe family put forward a terrific line-up of 89 Angus and Murray Grey bulls and they were certainly well received by both return and new buyers who fought hard to secure their requirements.

With 99 registered buyers at the sale and another 65 registered bidders logged into the AuctionsPlus platform from New South Wales, Victoria, South Australia, Queensland, Tasmania and also WA, the Nutrien Livestock selling team, led by auctioneer Michael Altus, had no problems selling the bulls as the bids came in as strongly, as the wind blew across the Metcalfe's property, with most bulls attracting support from three to four different buyers.

By the time the final bull left the ring and the numbers were crunched, 88 of 89 bulls offered were destined for new homes at an average of $10,230, which was up $3456 on last year, while the sale gross of $900,250, is believed to be the highest ever recorded at an on-property sale in WA (until the Coonamble sale the following day).

Along with the strong bidding in the stands the contribution from the registered bidders on AuctionsPlus also played a crucial role in the sale's excellent result.

Between them the 65 registered AuctionsPlus bidders placed 196 online bids across 44 lots, resulting in six bulls selling to online buyers. 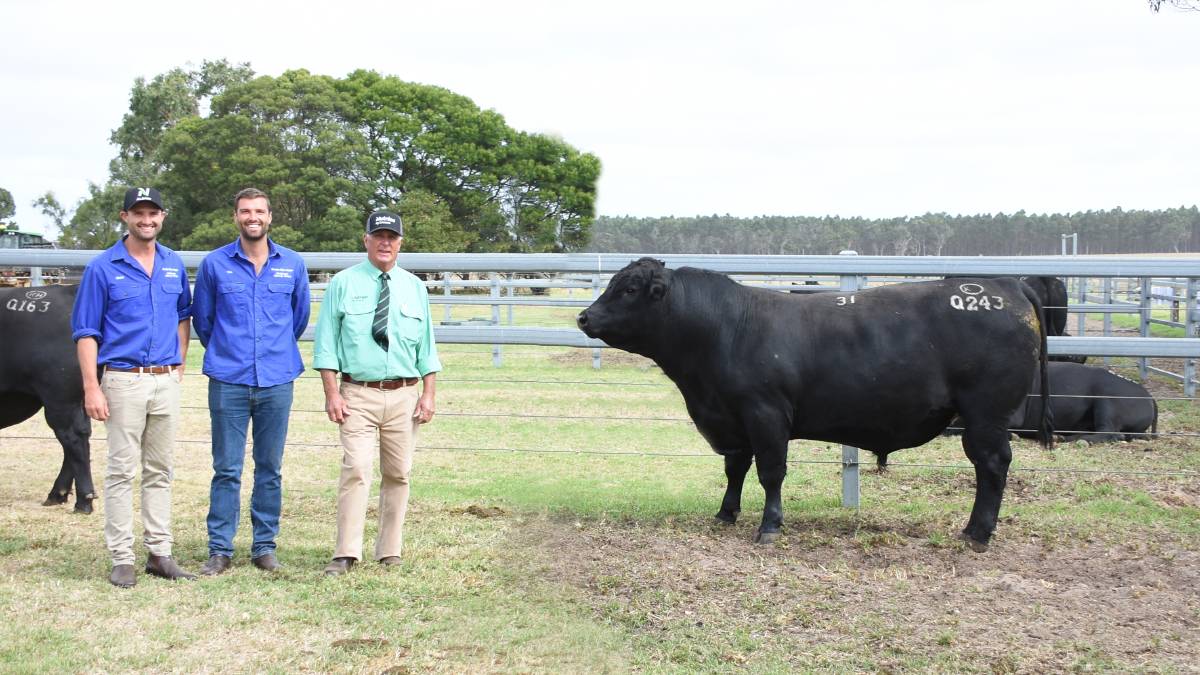 This Koojan Hills Angus bull sold for $18,500, the second top price in the sale, to Joe Davis, JP & J Davis, Manypeaks. With the bull after the sale on Monday were Koojan Hills co-principals Chris (left) and Tim Metcalfe and Nutrien Livestock, Great Southern manager Bob Pumphrey.

Nutrien Livestock, Great Southern manager Bob Pumphrey said it was a tremendous result for the Metcalfe family and a credit to their breeding program and presentation of the bulls.

"It was a great presentation of Angus and Murray Grey bulls right through the catalogue," Mr Pumphrey said.

"It was a very even line-up and the quality was there from start to finish and the buyers responded accordingly.

"The 99 registered buyers at the sale, was well and truly the most we have ever had and they showed full confidence in the bulls bidding up strongly on their choices.

"To achieve a full clearance of the 72 Angus bulls at an average of more than $11,000 is exceptional.

"The overall sale result was certainly well up on expectations."

Equally as happy if not happier with the final outcome was stud co-principal Richard Metcalfe who said the family was ecstatic with the sale.

"I think we were well rewarded for our better bulls," Mr Metcalfe said.

"While we are blown away with the final sale figures the thing we were most happy with was how steady and consistent the sale was in terms of prices.

"There were no big highs or low troughs, which was really pleasing and highlighted the evenness of the line-up.

"We were also very happy with how the bulls presented and behaved in the ring."

Once again it was the Koojan Hills Angus bulls, which led the sale and they didn't disappoint with the quality line-up receiving strong buying support from across the country to see prices top at $20,000.

Like in past years, the line-up drew a large crowd of prospective buyers with the ringside grandstands filled to capacity and when the bidding got underway the crowd showed they weren't just there to look but they were there to buy and they dug deep into their pockets to secure the bulls they wanted.

All up 72 Angus bulls went through the ring and Mr Altus found new homes for all of them, as 41 different buyers purchased them at an average of $11,028, the best ever recorded by the Koojan Hills stud and the third best ever record by an Angus stud at a single vendor sale in WA.

In comparison to last year the average was up $3961 and the stud sold an additional 12 bulls under the hammer.

The tone for the sale was set early when Koojan Hills Investment Q42 entered the ring in lot four.

From the moment the 870 kilogram, Sitz Investment 660Z son stepped foot in the ring it showed off terrific balance, softness and style and the buyers responded with Mr Altus taking an opening bid of $10,000.

From there the price rose quickly and finally at $20,000 Investment Q42 was knocked down to return buyers Brett and Chase Edwards, Plain Grazing Co, Beermullah.

Brett Edwards said they picked Investment Q42 out initially on its figures in the catalogue and then when they inspected it on sale day, were equally impressed.

"Not only does he have the figures we want he is also a very soft, smooth looking bull with a really good structure."

The Edwards will use Investment Q42 over younger females, from their nucleus herd of 80 head to breed bulls for their own use.

All up the Edwards run 450 Angus breeders, which are joined to calve in May/June.

When it comes to selling their calves, they sell their bull calves to the live export market, while surplus heifers are sold to lotfeeders the following spring at about 15-months-old.

Along with Investment Q42 there were another seven bulls to sell at $15,000 or more in the line-up including another Sitz Investment 660Z son, Koojan Hills Investment Q243, in lot 31, which sold at the day's $18,500 second top price to repeat buyer Joe Davis, JP & J Davis, Manypeaks.

Mr Davis said Investment Q243 was a standout bull that impressed every time he looked at it.

"He is a really heavy bull with good growth and a good structure which is able to carry his weight," Mr Davis said.

"He also has very good feet which is something I look for as we need that in the Manypeaks area as it gets a bit wetter.

"When it comes to his figures he has good growth but more importantly they are a good balanced set of numbers.

"I was also attracted to his bloodline and all the Sitz Investment bulls seem to be of a consistent type so I am excited to see what it will do in our herd as it will be a new bloodline for us."

Mr Davis, who likes the Koojan Hills bulls for their performance and because they are bred in the same area he farms, starts calving in mid-February with the maidens calving for six weeks and the mature cows for eight weeks.

He then generally sells his steer calves and surplus heifers before the Christmas/New Year period to a South Coast lotfeeder.

This season his steers averaged 400kg when they were sold, which was up from what they normally average of about 385kg.

The third highest price in the run was $16,000 paid by return buyers FV Hortin & Sons, Albany, when the operation had the final bid on Koojan Hills Investment Q163.

Investment Q163 wasn't the only bull headed to the Hortin's paddocks, they also secured another three sires to finish with a team of four at a $12,250 average.

The Gormans bid to $15,000 for Koojan Hills Quantum Leap Q123, which is by Koojan Hills Up River N73 and ranks in the top 2pc for gestation length and top 7pc for 400-day weight and the domestic index.

Denmark-based GMC Corporation, was another repeat buyer, which had a major influence on the sale.

Through manager Greg Godden, it purchased four bulls at an average of $12,625 and to a top of $13,500 paid for a Koojan Hills Kaiser Q71, which is sired by Granite Ridge Kaiser K26.

Mr Wood said they were chasing bulls to join to heifers and along with having traits for a heifer joining the bulls had to have good feet.

"We continue to return and buy from Koojan Hills because the bulls have good calving ease traits and because they are bred in the same environment as we farm," Mr Wood said.

The Woods run a breeding herd of just over 400 Angus breeders, which start to calve down from the middle of February.

They aim to background their steer calves, taking them through to 400kg before selling them.

The six bulls which sold to AuctionsPlus were all Angus sires and they sold to a high of $11,500.

Following the offering of Koojan Hills Angus bulls, the Metcalfe family offered a small run of 17 Murray Grey sires from their Melaleuca stud and while the competition wasn't as strong as on the Angus sires, the family still achieved a strong result. Prices hit a high of $10,250 for this bull in the Melaleuca Murray Grey offering at the stud's on-property sale on Monday at Manypeaks. With the bull were buyers Georgina (left) and Valerie Pitt and David Stone, Relevant Investments, Manypeaks, Melaleuca stud principal Richard Metcalfe and Nutrien Livestock, auctioneer Michael Altus.

Leading the way in the Murray Grey offering and achieving the $10,250 top bid was Melaleuca Quicksilver Q26 in lot 84 when it was knocked down to return buyers of eight years David Stone, Valerie and Georgina Pitt, Relevant Investments, Manypeaks.

Mr Stone said they purchased Quicksilver Q26 as the bull was recommended to them by Mr Metcalfe, saying it would suit their operation's needs.

"He is a good safe, quiet, heifer bull and that is exactly what we wanted as we will use him over heifers," Mr Stone said.

"We like the Melaleuca sires as they are quiet and reliable bulls and we are getting good performance in our calves from them."

The bull will join the operation's sire battery, which is joined to just over 100 Gelbvieh breeders.

Also not afraid to bid up on the bulls was Mike Twentyman, MI & DM Twentyman, Nanarup, who purchased two sires at $8000 and $7000.

Securing the most Murray Grey sires from the offering was Alcoa Farmlands, Wagerup and Pinjarra.

The operation, which has been buying from the stud for more than 15 years, purchased three bulls to a top of $5000 twice and an average of $4833.

Alcoa Farmlands manager Vaughn Byrd said they continued to buy bulls from Melaleuca as it breeds nice, soft, easy-doing bulls which are ideal for their herd.

The operation is currently running 500 to 600 pure Murray Grey breeders and the bulls purchased will be used over them.