The line up of tractors on offer at the Elders clearing sale last week at Newdegate on behalf of EDL Farms, Lake Magenta, including the 2015 Case IH Quadtrac 600 tractor (right) which topped the sale at $322,500.

More than $2.9m in machinery was sold at a Newdegate clearing sale.

WINDY, dusty and dry - that's one way to describe conditions at Lake Magenta, south of Newdegate when Elders conducted a clearing sale on behalf of EDL Farms on February 18.

While it was a clear day it wasn't too warm, unlike the few days previous which were a lot warmer, but attendees had to battle the wind and dust as they made their way through the four-hour sale.

Elders auctioneers Dean Hubbard, Steele Hathway and Michael Curnick shared the duties which saw more than $2.9 million in machinery and farm equipment go under the hammer.

The 2019 JCB Fastrac 8330 tractor on offer, with 605hrs was the second highest priced item, selling for $304,000 after serious bidding by a number of attendees. He also bought a Beverley Hydraboom for $62,000 after stiff competition.

A similar Hydraboom model sold for $113,000 to another buyer. Mindarabin farmer Scott Hemley with the old hay rake he picked up for $8200 at the Elders clearing sale last week on behalf of EDL Farms Lake Magenta, Newdegate.

Mr Nicoletti was said to have bought the farm, which will be a full cropping program, even though it has a brand new five-stand shearing shed.

Other buyers came from far and wide, including Boxwood Hill farmer Rohan Murdoch, who purchased a Commander Ag Quip 4 tonne sheep feed trailer with a 50:50 split electric motor and auger for $17,500, and Mindarabin farmer Scott Hemley, who purchased an old hay rake for $8200. Elders auctioneer Dean Hubbard in full swing last week at the EDL Farms clearing sale at Lake Magenta, Newdegate. The Trufab Grain King 30t chaser bin behind the crowd sold for $36,000, while a 25t one sold for $23,000.

Another buyer purchased three Universal sheep feeders for $6300 in one lot.

Other unlicensed farm trucks were offered but attracted much less interest. 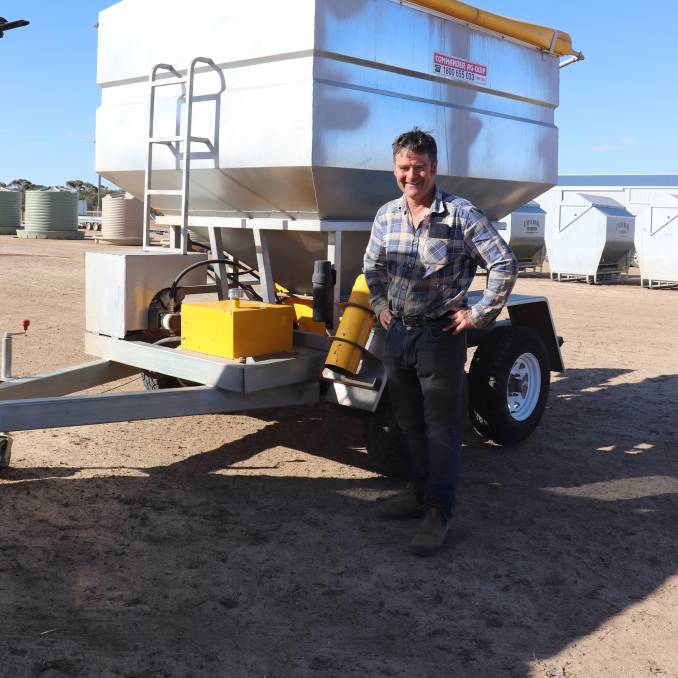 Boxwood Hill farmer Rohan Murdoch with the Commander Ag Quip 4 tonne sheep feed trailer with a 50:50 split electric motor and auger that he brought during the clearing sale for $17,500. Mr Murdoch said he purchased the feeder to feed his sheep and he wanted something reliable.