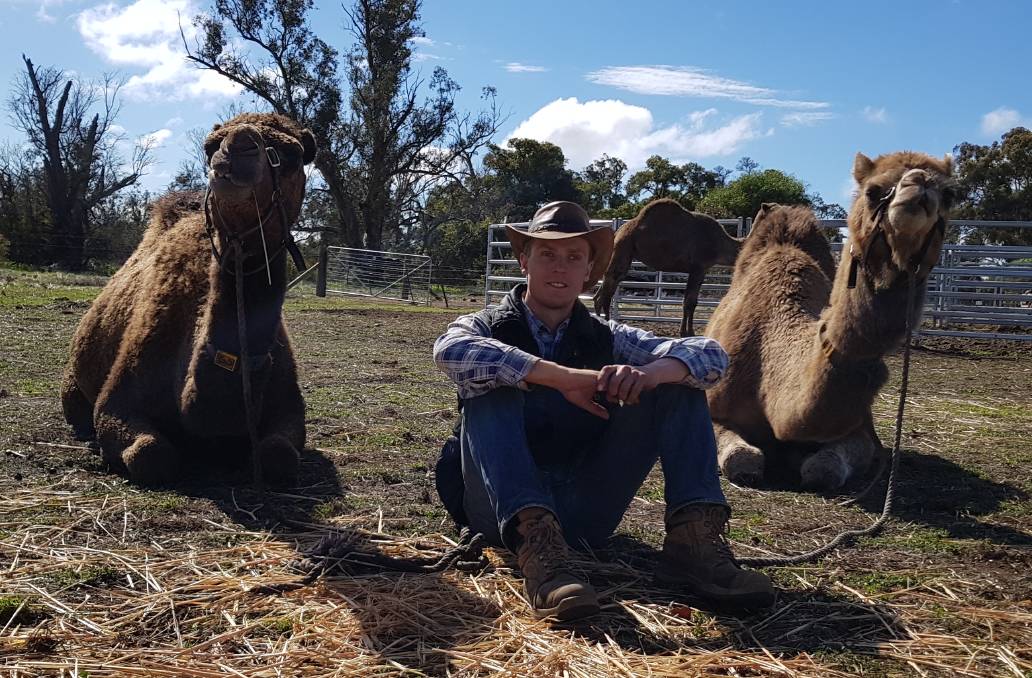 Max Bergmann has always had an interest in agriculture, growing up in a rural town in Germany. He went on to study agriculture at university, including completing a PhD in canola research.

Camel aren't usually the animal that comes to mind when you think of a dairy,

CAMELS aren't usually the animal that comes to mind when you think of a dairy, but for Max and Ronja Bergmann, it's the perfect combination of a business and lifestyle with their children Maya, 5, and Tim, 3.

They own and operate DromeDairy Australia, a camel dairy at Morangup, near Toodyay which is in the process of developing what is believed to be Australia's first mobile camel dairy, which has been supported by a Regional Economic Development grant.

They started the farm at Baldivis about six years ago and have since relocated twice as they have built up their herd, now comprising about 85 camels across 400 hectares (owned and leased).

Originally from Germany, Dr Bergmann grew up in a rural village and had relatives in farming which planted the seed for his passion for agriculture.

With four university degrees under his belt, including a PhD in agriculture which looked at the role of potassium to improve drought-tolerance in canola, Dr Bergmann felt it was time to go into practical farming and despite his expertise in crops, he ventured into camels. 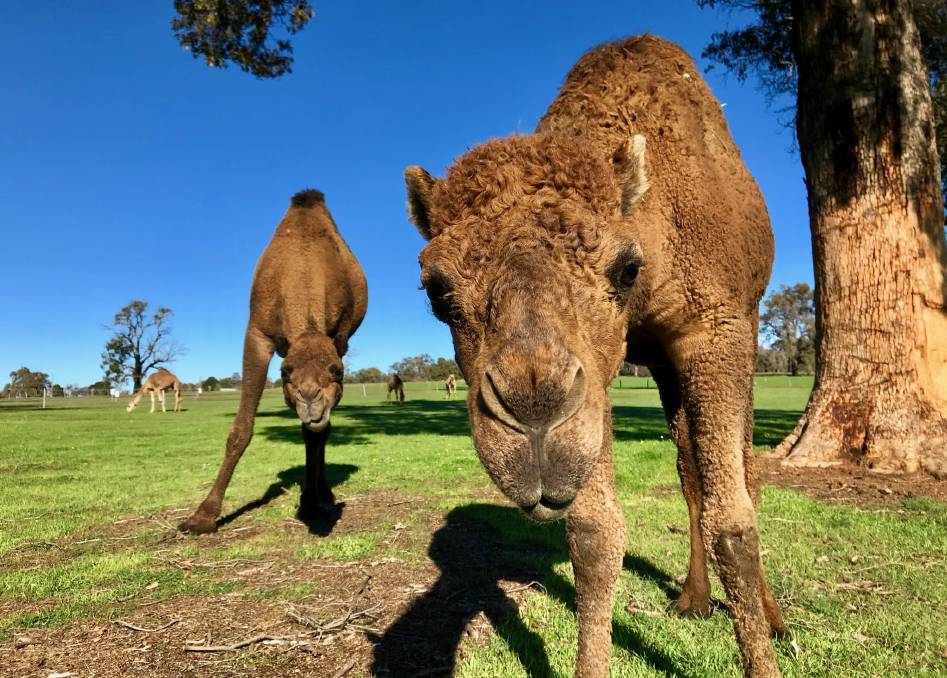 Currently in the development stages, the couple are establishing a mobile dairy, which is believed to be a first for the Australian camel industry.

"I have always been very passionate about farming in general," Dr Bergmann said.

"I think I have always had an interest in camels, I don't really know why though.

"But my wife saw a documentary about how Australia has the largest and healthiest wild camel population in the world and that sparked our interest.

"So we looked into it a bit more and it made sense to farm animals like camels or goats in Australia because they're so highly adapted to hot, arid environments like Australia, which is why there are so many."

Australia's goat industry has been developed on the same principle - using a wild animal that has been considered a pest and turning it into a commodity, but the camel industry is less developed.

"Australia is the largest wild goat exporter in the world and we see something similar for camels - they won't replace cows, but I think there is a significant part for camels to play in Australian agriculture," Dr Bergmann said.

"There are also other people who are interested in camel production, not just for dairying, but also meat and pet meat - anything is better than shooting them and leaving them, which is a very reactive way of treating the problem."

Only wild camels are farmed at DromeDairy. 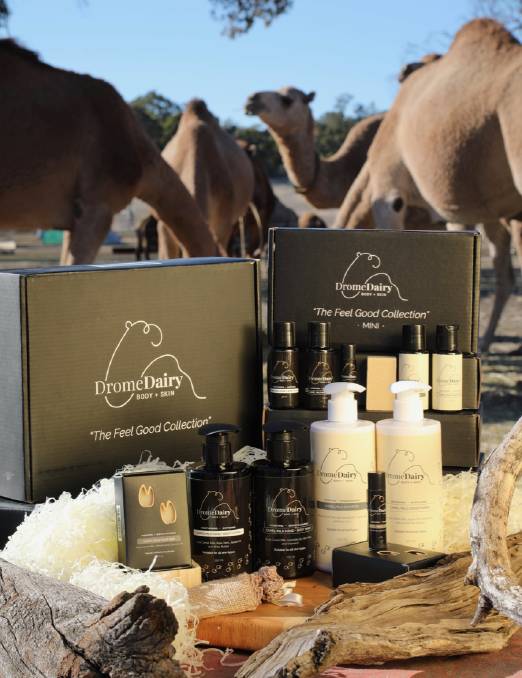 Skin and body care is one of the two product lines that DromeDairy produces.

When Dr Bergmann started milking camels, his direction for the business quickly changed.

The original plan was to target the boutique coffee culture, as camel milk is ideal for coffee, being pure white and froths well and as it comes at a premium price compared to cow's milk or milk alternatives (currently about $16 per litre), Dr Bergmann didn't see the product becoming a household staple any time soon, but suspected coffee connoisseurs would love it.

But after milking, he noticed how soft and nourished his hands were feeling.

"I didn't have the typical rough farmer's hands and once I looked into it more I found out that camel's milk is very good for the skin," he said.

It turns out camel's milk has antibacterial and anti-inflammatory properties, contains vitamins A, B, C, D and E which assist with the signs of ageing and other skin concerns such as pigmentation, acne, dullness and dehydration, and it also contains alpha hydroxy acids (AHAs) which gently exfoliate the skin.

Natural and organic skincare products have seen a major increase in demand in recent years, but most products derive the ingredients from another natural source, whereas camel's milk already contains the ingredients naturally. 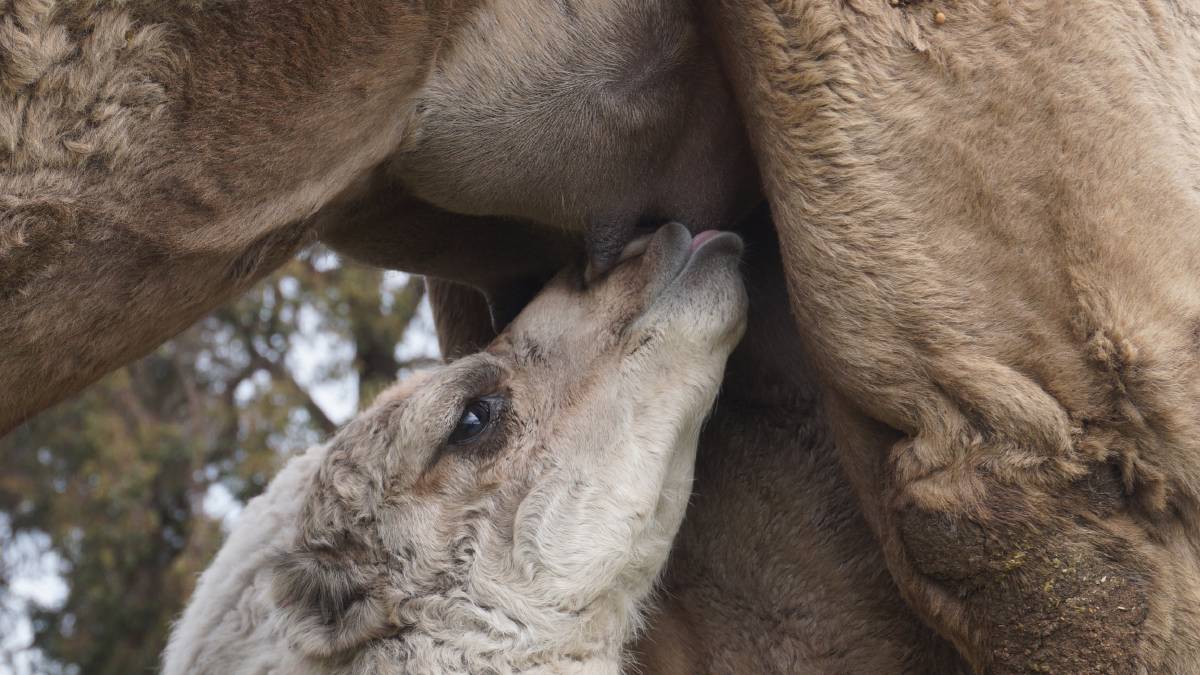 Camel milk is nourishing for the skin, which Dr Bergmann discovered when he first started milking.

The protein structure of camel's milk also enables it to penetrate deep into the skin, providing excellent hydration.

With this new insight, Dr Bergmann steered the business into a skin and body care direction, which is now DromeDairy's main focus.

Currently the range includes a soap bar, hand and body wash, hand and body cream, shampoo, conditioner and lip balm, with all products being manufactured in WA.

The business also makes powdered milk, which has interest from Asia.

Dr Bergmann made a name for himself in Germany by representing the country as a Paralympian and competitor in other high level competitions, which then led to interest from Europe and now the business is planning to set up an office in Germany to distribute its products across Europe.

It is planning to expand the range to include products such as a face cream, shampoo bar, pet shampoo, baby range, but developing products is a timely process.

Dr Bergmann said the biggest difference between milking a cow compared to a camel is that with camels, the calf is needed to let down the milk. 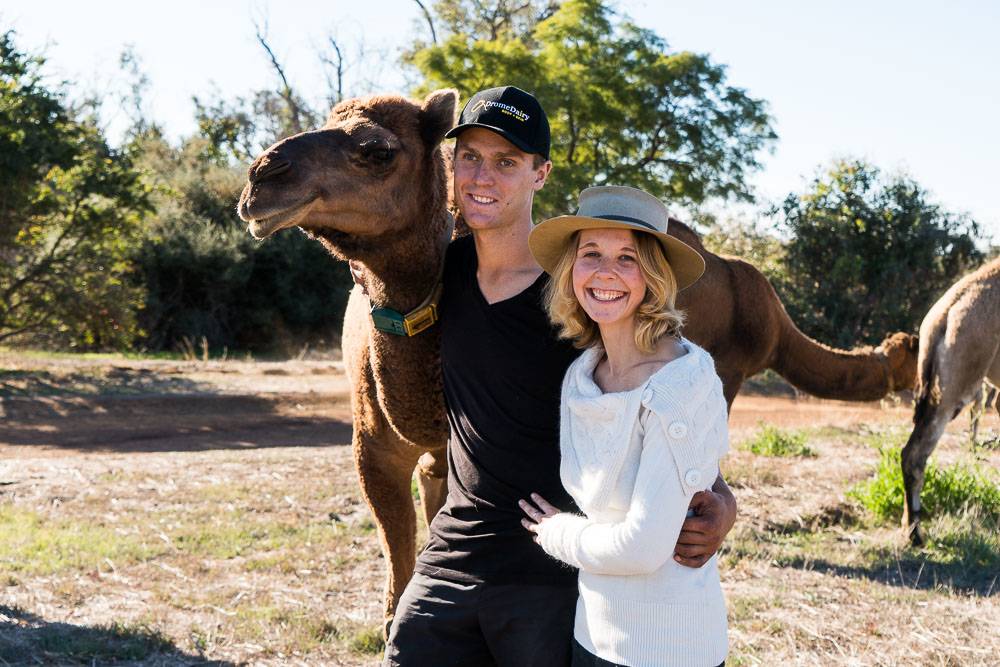 "In a cow dairy, the calf is removed from its mum and raised separately, whereas with camels the mother and calf are left together to bond," he said.

"A few hours before the milking, the babies are separated and the mothers are put into the milking system and then we let the calf onto the mothers and they start suckling and we move them around to all four teats and that stimulates an oxytocin release which helps to let down the milk.

"The teats will swell when the milk is down and then we take the calves off to milk the camel.

"Afterwards they walk off together and the calves can happily suckle and we never have to supplement feed the calves, the mothers have plenty of milk."

The milk is filtered and pasteurised on the farm. 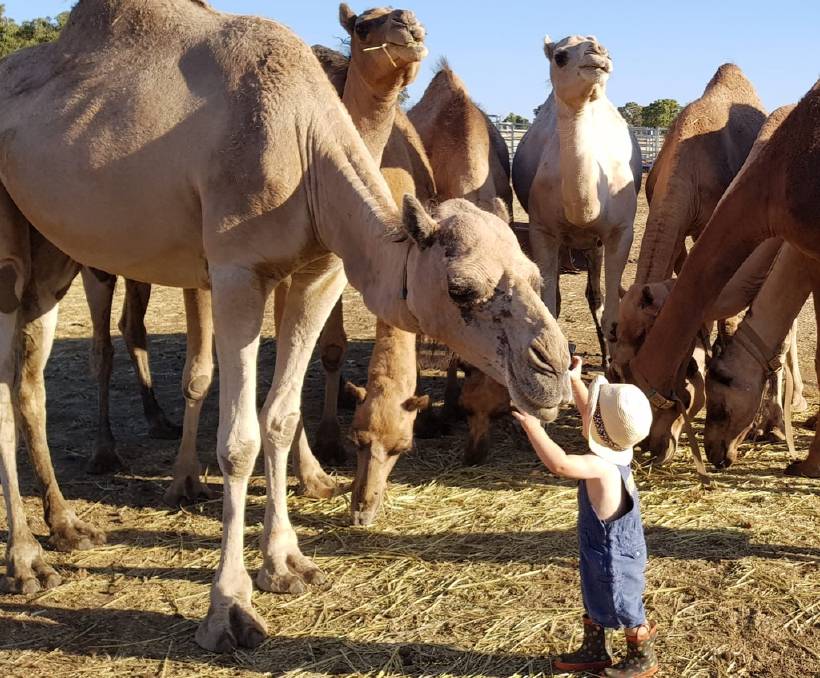 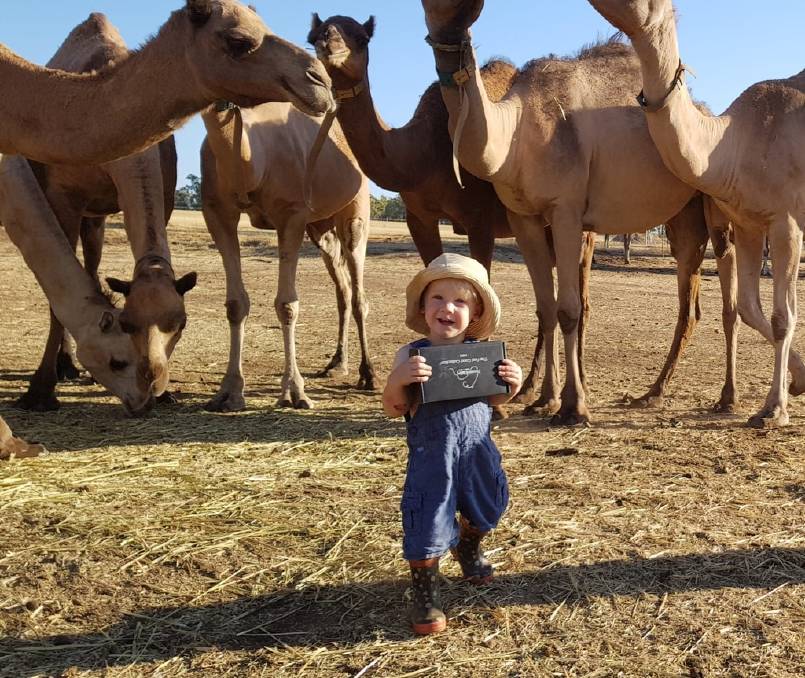 "We batch pasteurise it which is different to what large commercial dairies do," Dr Bergmann said.

"Big dairies would send their milk to a processor which would pasteurise it by heating it to 72 degrees for 15 seconds, whereas we heat our milk to 60-65 degrees for half an hour and by doing this none of the beneficial properties of the milk are destroyed.

"Then we freeze the milk, camel milk has a unique molecular structure so you can freeze it.

"The frozen milk is taken to a depot and it's freeze dried, which is a process that protects all of the proteins so none of the benefits are reduced.

"We also do another process to thicken pasteurised milk and the cream is used for our skincare."

Still in the development stage but possibly be in operation in three to four months, DomeDairy's mobile dairy is part of Dr Bergmann's overall vision to operate an ethical dairy with happy milkers and calves.

The idea behind it is to decentralise the dairy concept, where large numbers of animals are concentrated in a small area for milking.

Like a cow dairy, the camels are brought into the dairy shed twice a day for milking.

Because Dr Bergmann only milks the camels in small groups, the process of having a centralised dairy is very labour intensive, whereas with a mobile dairy, he will go to them.

"We are building a 100 per cent pasture-based system, so our camels and calves are always outside in the paddock and we will bring the milking system to the camels by driving it along the laneways, stop near the paddock, milk the camels and then move onto the next paddock," he said.

"We also believe this is more ethical as the camels are left where they like to be in the paddock.

"This is not a completely new idea, it's a re-innovation of what used to be done in Europe."

Camels have a reputation for being stubborn, but Dr Bergmann believes that they are misunderstood.

"They are quite intelligent and they are not flight animals, which is why I think they're perceived as being very stubborn and have a bit of a bad reputation," he said.

"Cows, sheep and horses run when they are scared, whereas if a camel is stressed, they will just look at you and stand their ground or they'll just sit down and wait, especially during loading and unloading."

Camels don't actually spit like llamas and alpacas do and people confuse that behaviour with camels gurgling.

"If they are behaving like that (gurgling), that means they are in a really stressed state so the handler should think about what they have done to make the animal act like that," Dr Bergmann said.

"So I think there is still a lot of education to be done about handling camels."

Dr Bergmann has lots of ideas for his camel dairy farm, but like all good things they take time and effort.

And with the couple establishing the farm on their own with no capital backing behind them, Dr Bergmann prefers to focus on a few things at once and perfect them before starting something else.

There might be 'humps' along the way but he is determined.

"Now with the State government grant we are getting into a new stage where we will hopefully be able to produce more milk and generate more sales and develop our markets more," he said.