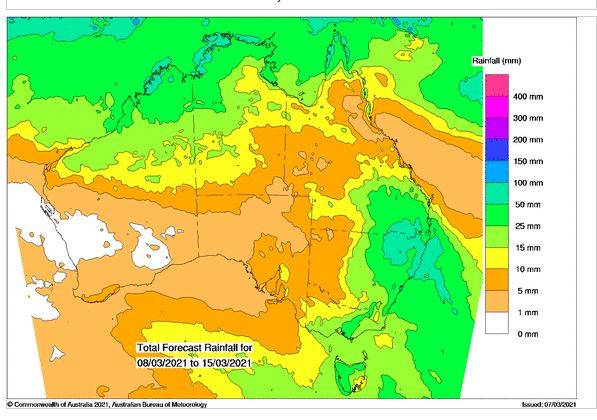 The eight day outlook is promising for southern Queensland and northern NSW in particular. Source: BOM.

Southern Queensland has remained in somewhat of a rain shadow during the current La Nina event, but there may be rain on the way.

QUEENSLAND'S agricultural sector will be hoping a largely lacklustre La Nina weather event ends with a bang, with heavy rain forecast over the next fortnight.

While the La Nina has played a role in parts of NSW and eastern Victoria having a very wet summer, generally the wet season in the Sunshine State has failed to get pulses racing.

Catherine Ganter, senior climatologist with the Bureau of Meteorology (BOM) said in last week's BOM climate update that it was notable how dry south-east Queensland had been over the summer.

"It is actually drier than average in pockets through Queensland, which is quite unusual with a La Nina in place," Ms Ganter said.

Compounding the matter, parts of Queensland were also warmer than average in contrast to much of the country which had its coldest summer in ten years.

However, a number of forecasting models are predicting a nice end to the wet season, in particular for those in south-western Queensland, the Darling Downs and spilling over into inland northern NSW.

The BOM's Water and the Land eight-day outlook has in excess of 50mm for the next week for much of northern NSW and southern Queensland.

There is no massive rain event within the outlook period, just a series of constant showers and afternoon storms that will cumulatively push the rainfall tallies up.

If it delivers the rain will be a boon for late sown summer crops and also provide moisture for those thinking about a winter crop.

And while only speculative, some longer-term forecasts are predicting more serious rain over the next fortnight, with as much as 200mm possible across the northern Darling Downs.

These models, however, forecast a full range of outcomes and the higher tallies generally prove to be overly optimistic.

Regardless, the fact there is moisture about will be welcomed by growers who have been faced with a summer that did not behave in line with expectations.