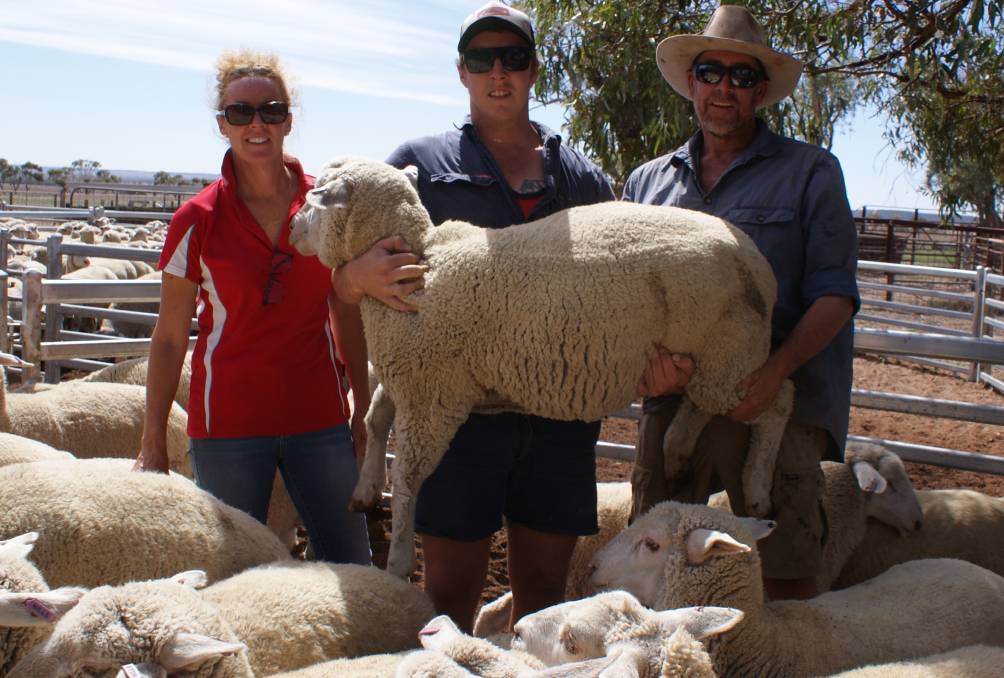 WAMMCO Producer of the Month winners for February Kate, Jack and Peter, Ikewa Grazing, Mingenew, with some of their 650 White Suffolk-Prime SAMM lambs booked for WAMMCO this month.

Peter and Kate Mills and their family, at Mingenew/Arrino win producer of the month award.

WAMMCO'S Producer of the Month for February, Peter and Kate Mills and their family, of the steadily growing Ikewa Grazing farm business at Mingenew/Arrino, are working confirmation of the recent Rabobank report that WA rural confidence is at a five-year high.

Continuing high prices for lamb on top of a good harvest and a reasonable season, boosted by the decision seven years ago by their eldest son Jack, 24, to join his parents as "cropping manager" for the enterprise, saw the purchase last year of an Arrino property they previously leased, to boost the Ikewa estate to 7000 hectares.

Peter's faith in the prime lamb market back in the early 2000s, with a shift in his family's traditional focus from Merino wool and Border Leicester crossbred lambs, to Prime SAMM lamb production, is responsible for an impressive 2500-head, Prime SAMM breeding flock.

Along the way, the family has collected WAMMCO Producer of the month awards for February 2011 and April 2014, before winning the prestigious Producer of the Year title for WA in 2016.

The latest prize - for February, 2021 - was for a line of 244 White Suffolk-Prime SAMM lambs processed at Katanning on February 4.

Like previous top-scoring drafts, the consignment was straight off lupin stubbles and needed minimal supplementary feeding.

The Mills family can safely bank on a 100pc plus annual lambing percentage and consistently-high weight gains from their Prime SAMM lambs.

With a recent infusion of White Suffolk genetics to add hybrid vigour, along with Prime SAMM influence from Graham Sutherland's Sandown Prime SAMM and White Suffolk studs at Badgingarra - the lamb/pasture enterprise accounts for about 30pc of the farm business with wheat, lupin and canola cropping holding the major balance.

"We were surprised just how well the crops performed this season on rainfall totalling 351 millimetres for the year," Peter said.

"A trial pasture crop of barley was too good to graze, so we harvested and sold the grain."

With just over 50mm of rainfall so far this season and grain and lamb prices holding well, the family is certainly optimistic about the immediate prospects for farming.

The Mills family believes the wool and lamb industry in their region remains well below the capacity of its days of former glory, despite the very attractive returns on offer, particularly for lamb.

"However generational change is happening in families that have persisted with and in some cases expanded their flocks."

There has also been relatively high turnover in the ownership of Mingenew farmland.

"We always keep pace with saleyard and other prices on offer, but generally our results under the weight and grade system are very good," Peter said.

As past beneficiaries of VIASCAN data recording and the former related price incentives for quality such as WAMMCO Select, they are keen to see results for their lambs from the DEXA system currently being installed at Katanning, and benefits via electronic tagging that will be available to WAMMCO producer members.

Other Mills family members include daughter Maggie, 22, in Geraldton and twin 19-year-old sons Henry and James, both now qualified mechanics.

The Mills family's winning WAMMCO sweet spot of 98.64pc was narrowly ahead of Scott Welke's Westwood Farms, Cascade, with a sweet spot of 98.61pc for 359 lambs and another two loads totalling 801 lambs from Myles O'Meehan at Caralinga, Borden, that scored 95.75pc.

Both Westwood and Caralinga are based on a White Suffolk-Merino cross.