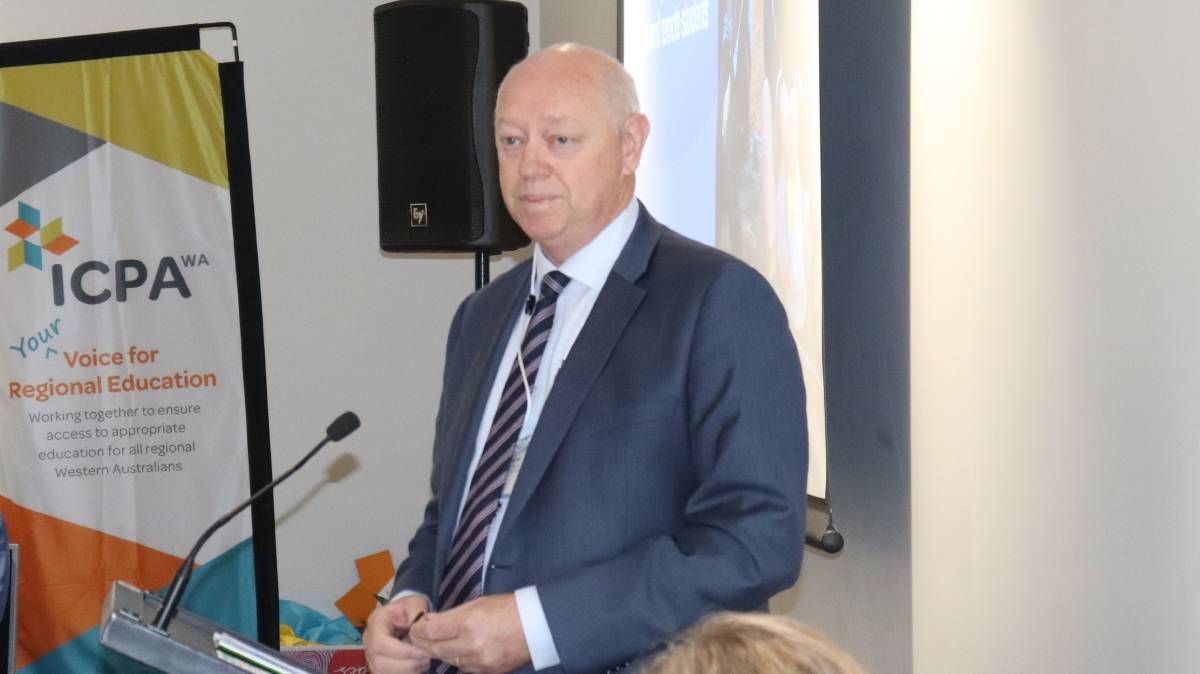 Commissioner for Children and Young People, Colin Pettit, presented some of the results of the 2019 Speaking Out Survey at the ICPA of WA conference last Friday.

"On every measure the girls fared worse than the boys, so we want to interrogate what it is that the girls are saying that the boys aren't."

A SPEAKING Out Survey of 5000 of Western Australia's year 4-12 students has highlighted mental health to be a major issue for the State's female youth.

Conducted by the office of the Commissioner for Children and Young People WA in 2019, the survey asked students a range of questions on their wellbeing at randomly selected schools in metro, regional and remote areas showed a substantial number of year 7-12 students reported poor life satisfaction, low self-esteem, high levels of stress and the feeling they couldn't cope with life's challenges.

Speaking at the Isolated Children and Parents' Association of WA State conference last Friday, Mr Pettit said the results had been vastly different compared to a survey conducted in 2016 by the commission.

"But in 2019, almost every young person wanted to talk about their mental health and this was before COVID even became a thing and the economy was buzzing.

"What also jumped off the page was that one in six girls in secondary school said their life was pretty crappy - whether they lived in the country, metropolitan area or lived remotely and the international average is much less than that.

"On every measure the girls fared worse than the boys, so we want to interrogate what it is that the girls are saying that the boys aren't."

Mr Pettit said the results of the 2019 Speak Out survey had been provided to the Mental Health Commission and was used to redesign their youth policy, released in December last year.

"We just commissioned a fairly large report on young women using not only this data but international data and that will be released at the end of April and we will be using that to do a large consultation later in the year with girls from 10- 18 years old to see what is driving these issues," Mr Pettit said.

"Then we are going to flip it and try to get a whole range of young boys and men and say how come this is happening and how we can actually change this, because if we don't listen to the voice of kids we won't understand something significant that is happening in our society."

Students in remote areas were also somewhat less likely to be affected by some sources of stress that were significant for students in other areas.

For example, fewer students in remote areas reported being affected by school or study problems and by worries about mental health and wellbeing.

On the other hand students in remote areas were more likely to identify bullying as a source of stress.

"With COVID we shut the doors and sent everybody home and we didn't think what the impact of that is on the mental health and well- being of our young people who aren't in that position of having a supportive home," Mr Pettit said.

"There were some contradictions for Aboriginal kids, where the results showed they felt safe in their community but less safe in their home.

"However girls in Aboriginal communities, regardless of where they were, reported feelings of higher confidence than non-indigenous girls.

Funded by Lotterywest, the Speaking Out Survey will be extended in 2021 to reach children outside of mainstream education, including students with special needs and those in remote communities.

The commissioner will publish the Speaking Out Survey 2021 findings later this year.