SO4 chief executive officer Tony Swiericzuk rings an Oriental gong to signal the start of commissioning of the front-end feed system for its Sulphate of Potash (SoP) fertiliser plant at Lake Way near Wiluna. On the gong chime the loader behind him tipped the first harvest salts into the feed hopper and a conveyor carried then up to a surge bin and lump breaker. Photos by SO4.

WA FARMERS could be first to try truck loads of Australia's start-up production of premium Sulphate of Potash (SoP) fertiliser.

Perth-based SO4 has started commissioning Australia's first SoP fertiliser production plant at its $264 million project at Lake Way, a salt lake near Wiluna.

SO4 has invited farmers to make contact if they are interested in negotiating a price to collect truck loads of SoP fertiliser in June and July - either at the production plant gate off the Goldfields Highway 12 kilometres south of Wiluna, or possibly in Geraldton from where bulk SoP fertiliser will be exported.

In a ceremony on site last week to mark the historic occasion - up until now all SoP fertilisers used in Australia have been imported - SO4 chief executive officer Tony Swiericzuk rang an Oriental gong to signal the first load of harvest salts, stockpiled from three evaporation pond trains built on the Lake Way crust over the past two years, being tipped into the feed hopper.

From there the harvest salts were carried by conveyor belt up to the surge bin, run through the lump breaker and into the attritioning feed tank at the front end of the process plant.

The front-end feed system is one of 35 process units at SO4's Lake Way plant to be commissioned over the next seven to eight weeks, Mr Swiericzuk said.

With assistance from consultants Wood Group, plus vendors of the processing equipment, Veolia Water Technologies and Thomas Broadbent & Sons among others, site utilities, conversion circuit, flotation circuits, crystallisers and dryer will be commissioned progressively. 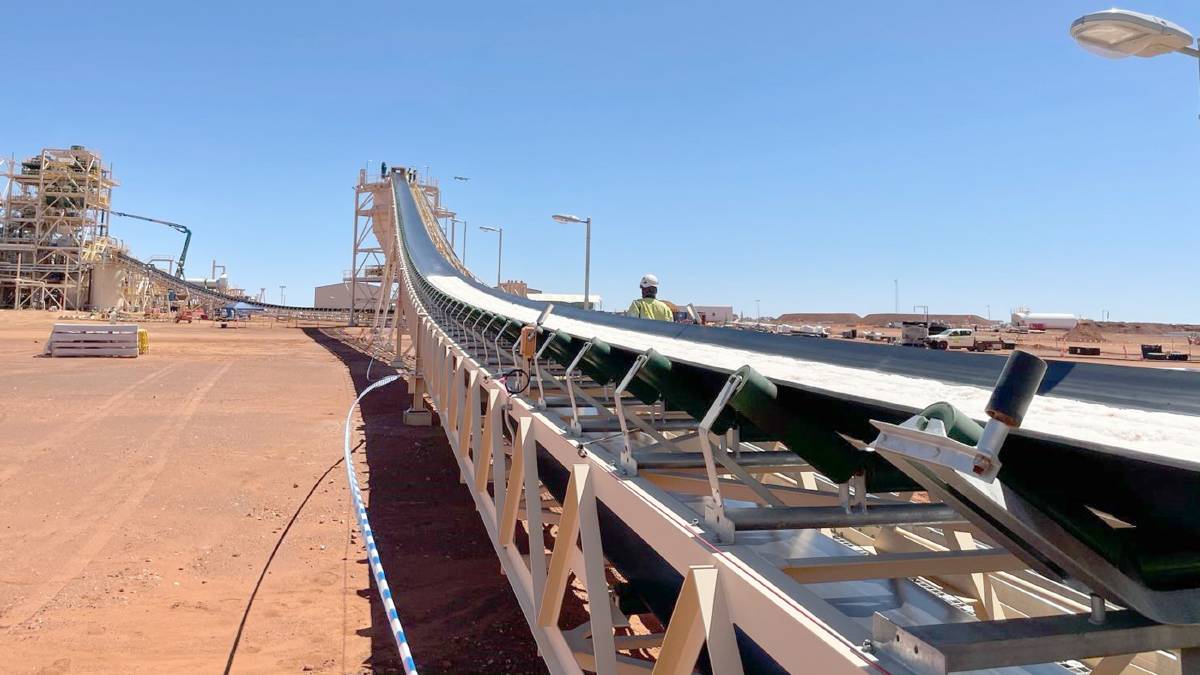 The first harvest salts on the conveyor into the production plant. The harvest salts were derived from potassium-rich brine collected from beneath the salt crust on Lake Way and concentrated in a series of solar evaporation ponds. The processing into fertiliser leaves the potassium and sulphur content, but removes the chloride.

Then, probably in late May, according to Mr Swiericzuk, the entire system will be loaded up for the first production run of SoP fertiliser.

Over the following months the process plant will be fine-tuned and "bedded down", he said, to produce SO4's flagship water-soluble fertigation-grade premium powder SoP fertiliser - to be called Precision.

Most will be targeted for export and sold into the premium-priced and fastest-growing sub-segment of the international SoP market, Mr Swiericzuk said.

SO4 will also begin production of its standard powder fertiliser - to be called Prime - which will be suitable for direct application and complex NPK production - again with 53pc potassium, 45pc sulphur, but less than 1pc chloride.

The fine-tuning and bedding down of the process plant is likely to result in up to 20,000 tonnes of early fertiliser product that does not quite meet stringent requirements for export.

"We're really hoping to hear from WA farmers who might be prepared to negotiate with us to collect a truck load of this not quite export-standard fertiliser and give it a try," Mr Swiericzuk said.

"They could pick it up it at the production plant gate or perhaps in Geraldton. 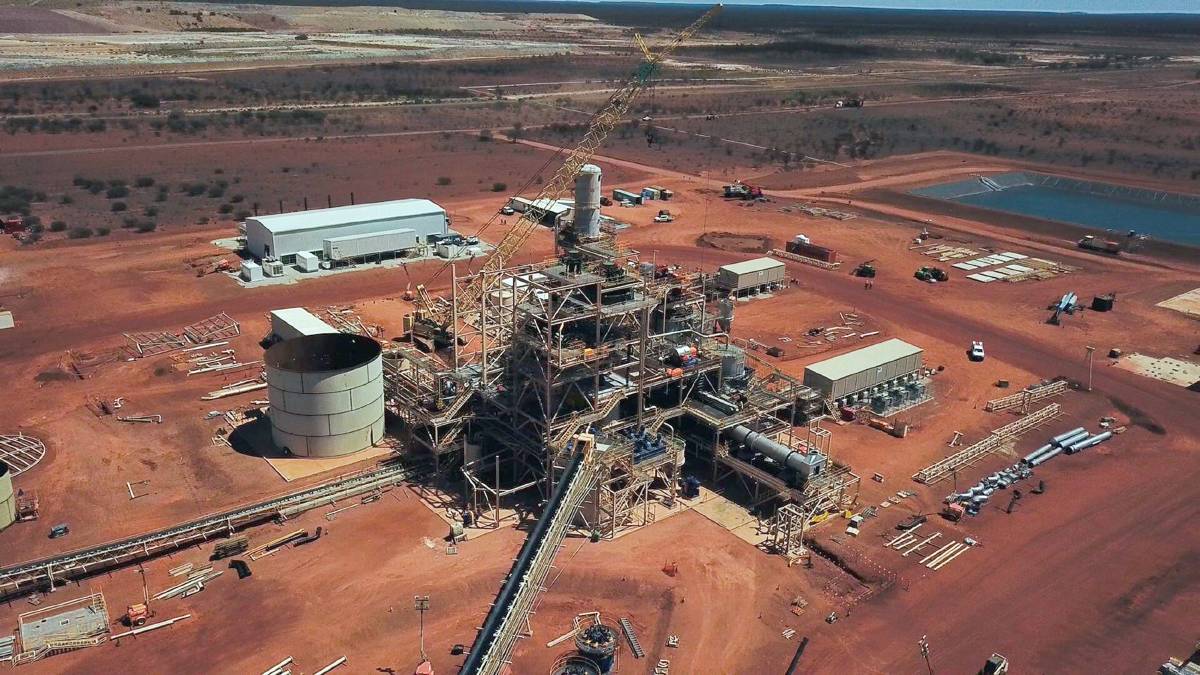 SO4's almost complete processing plant to produce Sulphate of Potash (SoP) fertiliser. The conveyor belt bringing harvest salts to the plant is pictured coming up from the bottom of the picture. The large rectangular building in the background is the bagging shed where much of the SoP for export will be packaged.

Mr Swiericzuk confirmed commercial production and sales were expected to begin in the June quarter.

"We're nearly there, the plant is about 95pc complete," he said.

Diesel generators provided electricity for last week's front-end commissioning, with the processing plant's own 10 megawatt power station still a month away from commissioning.

By June next year, SO4 expects to have another three evaporation pond trains producing harvest salts and SoP production will have ramped up to the processing plant's planned 245,000t per annum run rate.

Potassium-rich brine leaching out of the lake salt crust is collected by channels, pumped into a system of shallow evaporation ponds to concentrate the potassium and ultimately produce the harvest salts fed into the processing plant.

By the end of the coming June quarter, SO4 also plans to have launched Australia's first SoP fertiliser export industry, exporting up to 200,000tpa out of Fremantle port in containers - some SoP in loose bulk, some in one tonne and 1.5t bulk bags and some in 25 kilogram bags.

Containerised export product will be trucked from Wiluna to Leonora and then transferred onto rail to Fremantle.

Bulk product will be trucked to Geraldton for export.

SO4 is investigating local distribution options.

In financial year 2023, SO4 plans to add a granulated product called SoP Premium, with 52pc potassium, less than 0.1pc chloride and a particle size of 2-4 millimetres.

But its initial production runs would focus on the Precision product which will generate highest return and begin restoring the company's cash flow, Mr Swiericzuk said.

"(A) great day, huge milestone for WA, premium SoP out the back end shortly, (a) very humbling day creating history in this new WA industry," he posted on LinkedIn last week after the successful front-end feed system test.

"Commencing commissioning of Australia's first Sulphate of Potash processing plant is a major milestone for SO4 and testament to the hard work of our owners' team and GR Engineering Services (which built the plant)," he said later.

"It is exciting to see the vision that was first conceived in late 2018 come to fruition (in) less than two and a half years."

Mr Swiericzuk and other SO4 senior executives Lloyd Edmunds and Stephen Cathcart previously worked in the iron ore industry for Fortescue Metals Group and are experienced in delivering greenfields mining projects into production.

Next local company in line to begin producing SoP fertiliser in September at its Beyondie project 160km south east of Newman, Kalium Lakes Ltd (KLL), last week notified the Australian Securities Exchange (ASX) it has raised initial production estimates from 90,000tpa to a base rate of 100,000tpa, achievable by mid 2022.

KLL chief executive Rudolph van Niekerk said the company was "confident", following a review of its planned processes to remove "bottlenecks", that it could achieve further improvements to 120,000tpa without substantial plant modifications.

Better-than-expected potassium grades in salt lake brine that will produce higher grade harvest salts and fine tuning in a review of conservative initial estimates of the process plant's capacity had resulted in the revised production base estimate and new target estimate, he said.

Mr van Niekerk told the ASX that KLL was also exploring "options" to expand possible production to 400,000tpa over 20 years which could be supported by its potassium-rich brine resource at the chain of salt lakes in the Little Sandy Desert.

Also last week, with additional train loadings of SoP fertiliser into Perth expected from later this year, the Economic Regulation Authority (ERA) overruled State freight rail network operator Arc Infrastructure on its determination of incidental and total costs to apply to an application by Australian Western Railroad Pty Ltd (AWR) - a subsidiary of Australia's largest freight rail operator Aurizon - for an additional seven freight trains a week on the busiest section of the network, Kalgoorlie-Kwinana.

The ERA imposed its own costs determination and authorised Arc to negotiate with AWR for the extra trains, although in its submission Arc argued it believed allowing extra trains as requested could preclude other potential users from being able to access the busy section of the network unless additional sidings were provided or other track work was carried out.

With its application for extra trains, AWR is only the second company - CBH Group was first with its mammoth seven-year quest - to attempt to use WA's Railway (Access) Code 2000 to negotiate costs and train paths with ARC.

As previously reported in Farm Weekly, Muriate of Potash (MoP) fertiliser is widely used in broadacre farming on depleted soils, but its salt content makes it less suited for areas that already experience some salinity issues, like up to one third of WA's Wheatbelt.

SoP provides the additional potassium and sulphur without the added salt, but much of its overseas manufacture - principally in China - is by converting MoP using the Mannheim process, so the inflated imported price of SoP in Australia has restricted its usage to about 40,000tpa and mainly for higher-value horticulture crops.

It is estimated Australia's usage of SoP fertilisers could grow to 70,000tpa if local production can be distributed and marketed cheaply enough to compete on price and performance with MoP.

Overseas, the unwanted by-products of carbon dioxide and hydrochloric acid from the Mannheim process are expected to restrict production capacity of SoP fertilisers and add clean-up or carbon-credit offset costs to its price into the future as countries aim to be carbon neutral.

The global market for SoP fertilisers is about 7mtpa.