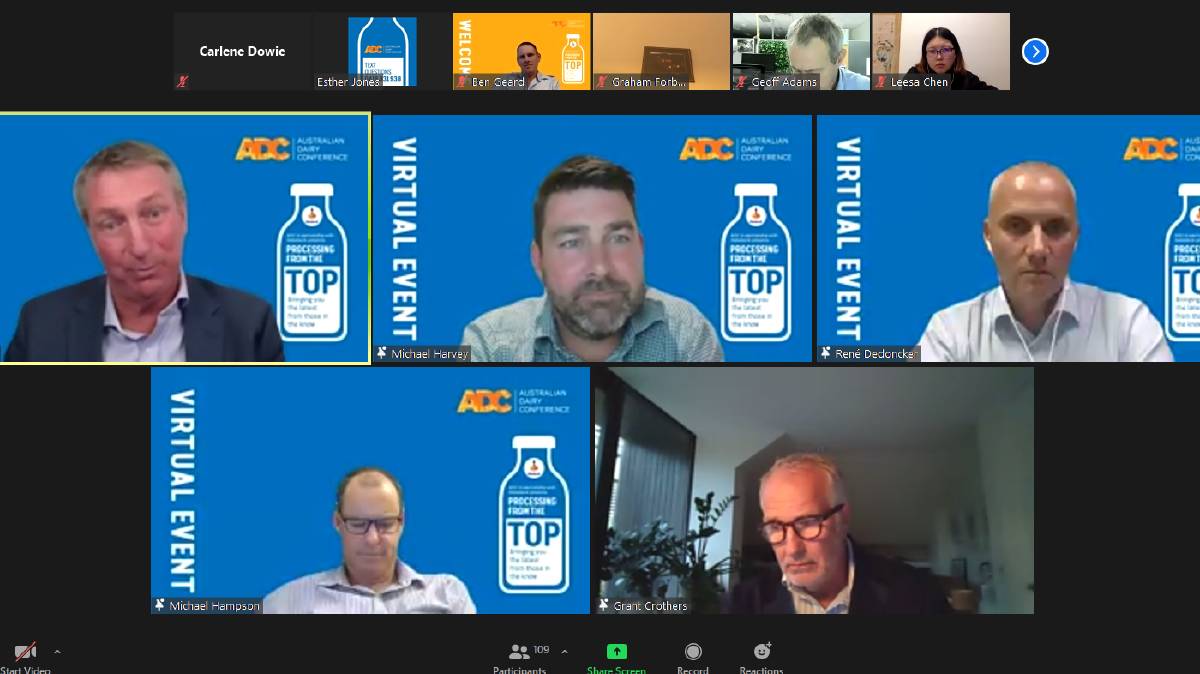 Major Australian dairy processors are looking forward to the coming season with optimism, having come out the COVID-19 pandemic in a good position, an Australian Dairy Conference webinar in March heard.

Major Australian dairy processors are looking forward to the coming season with optimism, having come out of the COVID-19 pandemic in a good position, an Australian Dairy Conference webinar on March 23 heard.

Rabobank senior dairy analyst Michael Harvey, who hosted the panel session, said the strong start to commodity dairy markets in 2021 meant some prices were at their highest levels since 2014.

But he warned forecasting milk prices for the season ahead this far out was always fraught with difficulty, particularly when things appeared to be changing rapidly in a large market like China.

Mr Irvin said while it was pleasing to see the price rally at present, he was always a little cautious.

"Obviously the commodity volatility that we've seen is pretty extreme," he said.

"I think sometimes people forget just the sheer size of the drop back in March last year; it was in that 30 per cent area."

Mr Irvin said last year's opening prices had insulated Australian suppliers from the worst of those drops in the commodity market and had some associated risk for processors.

"So it's been pleasing to see the path back and, quite frankly, I think I would say on the basis of my knowledge, I was a bit relieved to see it recovering as fast as it did," he said.

"I thought that we would have a long road to recovery."

Mr Irvin said it was too early to comment on opening prices for this year, given uncertainty about exactly how much product was going into storage and what was happening in the northern hemisphere.

"I feel optimistic but I also always temper my enthusiasm until we get a little closer to the moment where we've got to announce and make some sort of long-term assessments around what we think next year might look like."

Mr Dedoncker said he was optimistic about the season ahead, particularly as the Australian dairy industry had proved its diversity and reliability during the COVID-19 pandemic.

"More than ever, it is our time to create stability and to be able to leverage that diversity that we've got in this country," he said.

On the domestic scene, Fonterra had a solid retail business and its food service business was rebounding.

"Our exports are consistent and again I think that's built on the fact that we have been good supply partners through a really challenging 12 months to all of those countries in south-east Asia, and particularly China," he said.

"So those fundamentals are actually in good shape."

"I'm a bit careful around trying to see too far ahead but I think demand is going to stay fairly stable," he said.

Mr Crothers said the industry was in a sweet spot at the moment, with milk prices in the top 90 percentile, improved seasonal conditions and dairy farmers being able to retire debt and buy land.

But he also warned that the Australian dairy industry was a minnow in a very big food market and that currency also moved values around.

"We are in a very competitive space, we've got imports coming at us every day of the week," he said.

"It is a very tough market."

Mr Crothers said it was also important for farmers to understand that the Global Dairy Trade price index was "an index, not the index".

The milk price was complicated.

The ADPF had launched its Milk Value Portal in November to better explain the value of raw milk in Australia.

It tracked the commodity milk value in Australia on a spot basis and on a year-to-date basis.

"So there's a lot of information," Mr Crothers said.

The webinar heard that the Australian dairy industry had managed the impact of the COVID-19 pandemic well and had come out the other side in a good position.

Mr Hampson said the initial pandemic and lockdown was devastating for Norco, particularly as the company was primarily a supplier of fresh milk products.

"So there was a significant change of consumer demand."

The retail arm of the business picked up - although that represented a different value equation.

"So when you're moving from 6000 small customers into two or three large customers, there's quite a significant different value equation."

Norco turned to other ways to sell milk - with its cafes starting to retail milk and more product being sold through independent supermarkets.

The lockdowns also occurred at its traditionally lowest period of milk intake, which reduced pressure.

Mr Hampson said the big positive from COVID was that it had changed the marketplace.

"I think there is still that underlying desire from consumers to support Australian dairy and that's a very positive sign for the future," he said.

Mr Hampson said in the domestic market it was clear the Australian consumer valued Australian products.

"That is the big thing for reaching the sustainable price in dairy, certainly in northern NSW and in Queensland," he said.

"That's an incredibly large positive for us to hold onto.

"We've restructured pricing in the market over the last two years.

"It took a terrible drought to get there, but we've been able to hold it this year and let's see how we move forward into the future."

Mr Dedoncker said Fonterra had discovered the value of having options and different markets into which to sell its dairy products.

"In these times you need optionality," he said.

"Options on where to put milk solids and then you need a business system behind it that can do it quickly, so you need agility and speed."

Mr Irvin said the dairy supply chain in Australia had proved amazingly resilient during the pandemic.

It had worked together and quickly adapted to new processes on farm for picking up milk, while the logistics in both the domestic and export markets had coped really well.

So any disruptions to markets were fairly short lived.

"I think what that reflected is partly the industry culture where everybody works together when they are in a difficult period," Mr Irvin said.

"When we eat at home, we do eat more protein and we certainly eat more dairy, there's no doubt about it," he said.

"And I think that's here to stay.

"When we eat at home, I think we've all lifted our standards and therefore I think the retail offtake, while it won't stay at the peak that we all enjoyed, it will be inflated."

Mr Irvin said people had turned back to brands during the pandemic.

"I think there's a genuine trend," he said.

WATCH THE FULL SESSION BELOW:

The story Dairy processors optimistic about season ahead first appeared on Farm Online.