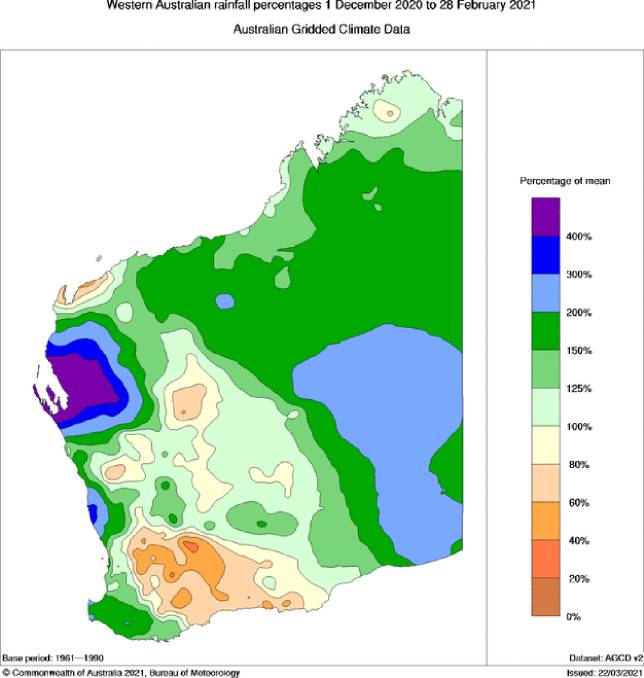 Most pastoral areas of WA have enjoyed an average to wetter than average wet season. Map by the Bureau of Meteorology.

IT'S shaping up to be a relatively favourable wet season for most of the State's pastoral areas and along the west coast.

The Bureau of Meteorology (BoM) reported that summer rainfall was above average for the north, east and west coast.

Although no tropical cyclones made it to land, with tropical cyclone Joshua remaining well off the WA coast, several tropical lows dropped widespread moderate to heavy rainfall in their passage, delivering much-needed relief for many producers.

"Western Australia's summer rainfall was nearly 50 per cent above average and it was the wettest summer since 2017-18," BoM said.

The Gascoyne region enjoyed a particularly big drink over the summer, largely due to a very wet period in early February by which a tropical low which resulted in a 'one in a decade' flooding event.

Although it caused inconvenient road closures, the downpour of more than 200 millimetres in three days was welcomed by pastoralists and horticulturalists.

It was during this rain event that Dairy Creek station, in the inland north Gascoyne area, recorded its wettest summer ever, with 224.3mm from December 1 to February 28.

December experienced three to four times its average rainfall from multiple tropical lows, contributing to some rainfall records for the month.

This included a tropical low which crossed the Pilbara coast west of Port Hedland on December 11, then travelled across the interior and south east, producing widespread moderate to heavy rainfall up to 160mm in its path.

On December 12 Noreena Downs station had a new daily summer rainfall record, with 150.6mm received, the highest in 102 years.

A tropical low ventured across the west Kimberley coast on December 20 and headed south east via the Kimberley to the Northern Territory.

Over a five-day period, rainfall totals were double the December average at areas in the south east Kimberley.

On January 22, another tropical low crossed the far west Kimberley coast and then via the east Pilbara towards WA interior and south east, leaving moderate rainfall in the Kimberley.

While the Australian northern wet season concludes at the end of April and monsoonal activity is less likely this late in the wet season compared to the peak period of December to February, BoM said there was still a chance for another monsoonal boost.

"This could result in further widespread rain across northern Australia, adding to the mostly above-average 2020-21 wet season rainfall totals which have been observed over much of Australia's tropics to date," BoM said.