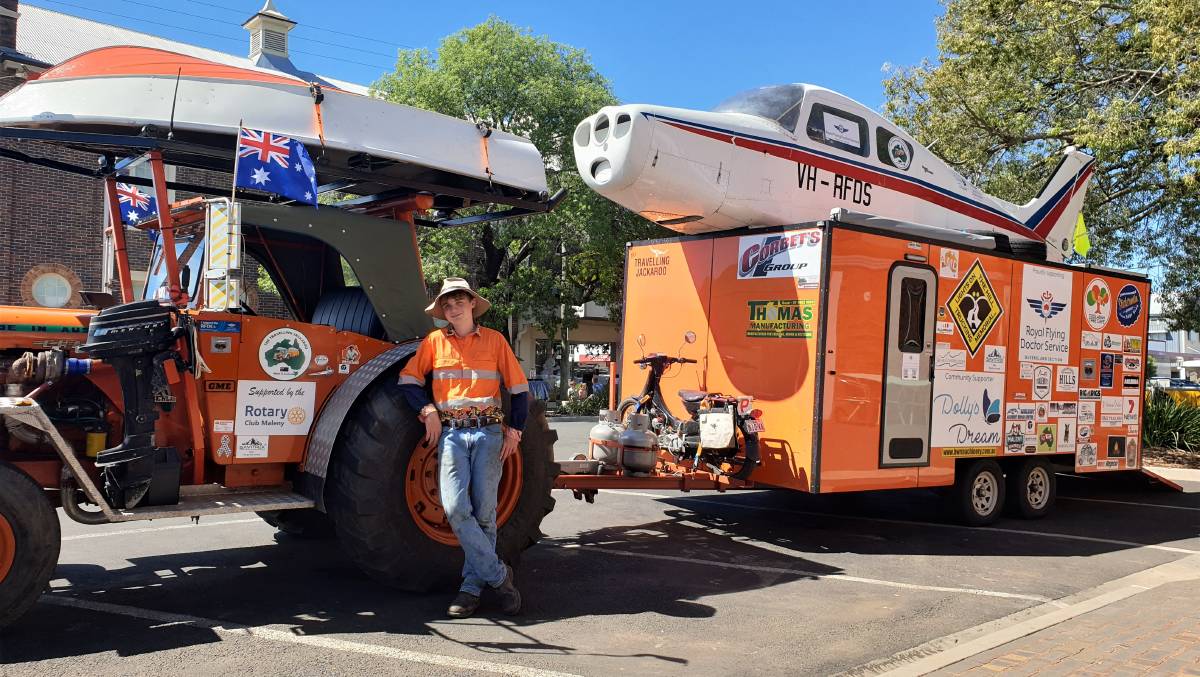 Landmark: It's impossible to miss Sam Hughes on the highways, with a plane advertising his presence to other road users. Picture: Sally Gall.

Gap years have become a thing of the past for most teenagers now that exotic overseas locations have been closed off but Sam Hughes from Maleny is on the adventure of a lifetime.

Gap years have become a thing of the past for most teenagers now that exotic overseas locations have been closed off but Sam Hughes from Maleny is on the adventure of a lifetime.

The 18-year-old has decked out a 1957 Chamberlain 9G tractor in bright orange, hitched up a similarly eye-catching trailer, popped a boat and the body of a small plane in RFDS livery on top, and is making his way around Australia at a top speed of 40 kilometres an hour.

Along the way he's hoping to pick up odd jobs and raise money for Dolly's Dream as well as the Royal Flying Doctor Service, and if his hi-vis Trademutt shirts are any indication, thinking of others in need is important to him.

He says his family taught him that if he can help others out, he should.

Sam says he's always dreamed of seeing Australia, unlike many of his age who have yearned for overseas destinations, and he classes himself as very lucky to now be able to do it.

Hard work has played a part as well - Sam has been earning spare cash since he was 14, and indulging in a hobby of buying and selling machinery to build up a fund that's allowed him to buy the tractor and fit it out.

"Mum and Dad think I'm nuts, but they're also very proud now that I've started," he said. "I just have to make sure I call them most days."

Considering he's travelled one twenty-eighth of his planned route since he set off from the Sunshine Coast hinterland on March 21, they are not going to be seeing their son for some time.

Sam originally planned a year off, doing whatever station jobs were offered along the way to keep himself in running expenses, but he now thinks it might extend to 18 months or more.

"But the longer I travel, the more I raise for charity," is how he looks at it.

His journey was interrupted by mechanical issues at Roma - an oil leak, a fuel tank leak and a radiator leak will do that - but the timing couldn't be better. 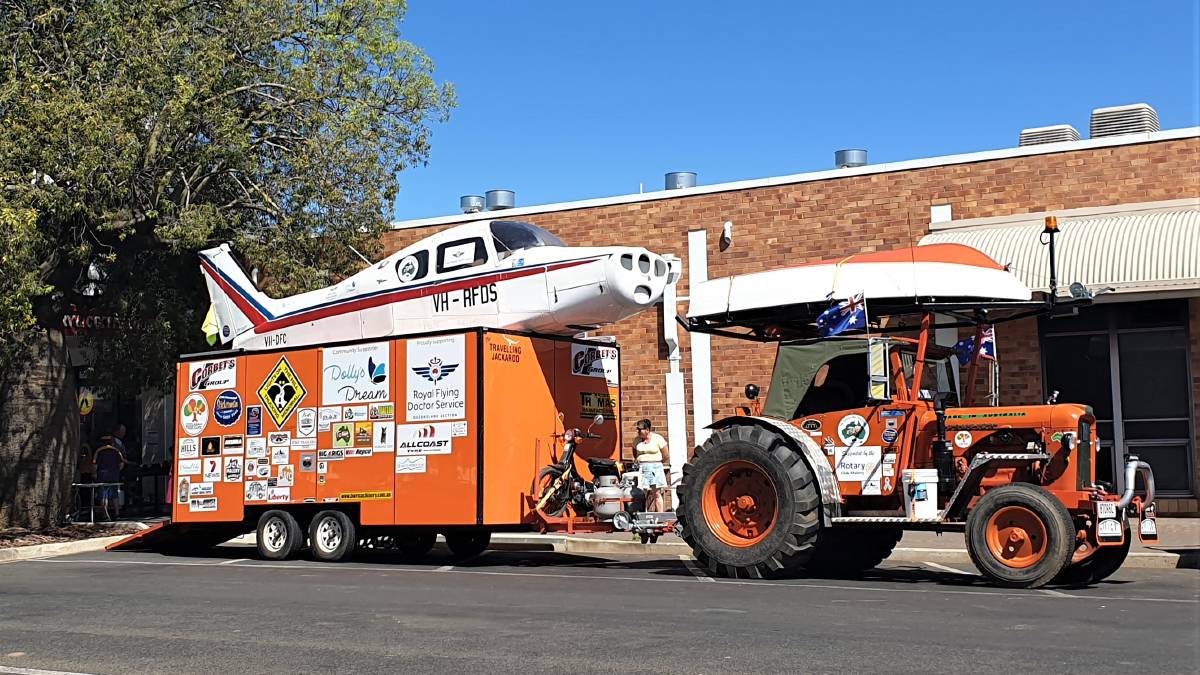 The Travelling Jackaroo is a distinctive sight wherever it parks, here beside Roma's bakery, with its washing machine bucket at the side.

While Humphreys Mechanical worked on the repairs, pro bono, Sam's enforced stop coincided with the community's first Easter in the Country festival in two years, giving him a ready audience willing to donate to his causes.

Not only did the tractor and trailer, named Slim and Joy, take part in the colourful festival street parade but they helped make history as the first time the drag strip at Roma has ever had a tractor on it.

"Needless to say, Slim cracked about 45km/h on the strip, much to the amusement of the dragsters doing 150mph," Sam told to his Facebook page. "So yep that's another thing to check off the bucket list, drag race a tractor."

The P-plater says road safety is his first priority and he's only had two incidences of road rage, both in the first 10 minutes of leaving the Sunshine Coast.

"The truckies look out for me - they know I'm also raising money for their Lights on the Hill memorial at Gatton," Sam said.

"Plus people are waiting along the way for me - I announce on my page that I'm leaving a town and they calculate when I'll be going past their turnoff, to come out and give me a wave."

So far he has close to 34,000 social media followers, and he fills the hours chugging along with a USB stick containing 1500 Slim Dusty songs, along with a few other country music favourites.

Although his trailer contains a kitchenette complete with sink, fridge-freezer, batteries and generator, there are times like Tuesday evening, when he parked up for the night at Morven's caravan park, that a grey nomad group nearby shares a meal with him.

"I'm just one of the few 18-year-olds who likes to appreciate the landscape," he said. "It's always changing, and I enjoy meeting new people along the way."

He is urging supporters to support the Sunshine Coast businesses that are supporting him, Maleny Dairies among them, and he has a GoFundMe page to help out with running costs.

As he says on that, the trip will be a long one with many ups and downs.

"This fund is set up to keep the tractor and trailer on the road (not as a donation page for the charities) and to cover any mechanical issues or other problems I may encounter on the road and throughout the journey.

"The support from this will help greatly in keeping this trip on the road, getting the word out and fundraising for these charities all around Australia."

The story Have tractor, will travel Australia first appeared on Queensland Country Life.