Paul Wyland with dog Occy and some of his cattle. He has been in Mt Barker for nine years and runs the operation alongside his wife Michelle.

"The Angus seem to get more money, but at the moment everything is selling extremely well."

LIFE is good for Paul and Michelle Wyland who are enjoying running their cattle operation at Mt Barker.

The Wylands have moved around Australia over the years but decided to settle nine years ago when they came across a property at Mt Barker.

"We went up to Tom Price for seven years and then over to the Hunter Valley, New South Wales, with Rio Tinto for two years and when we came back we spotted this place and have been here ever since," Mr Wyland said.

The Wylands are not new to farming, with Michelle coming from an agricultural background and her father Bob Armstrong having farmed in WA for many years.

The Wylands also owned a small hobby farm at Boyup Brook, running a handful of cows for a few years before moving to Tom Price in 2007.

Their current property is 142 hectares (350 acres) and they run 80-85 head of Murray Grey and Angus cross breeders.

Earlier in the year they had 100-110 breeders but decided to take advantage of the market prices, selling some of their older females.

As well as their home farm they also crop some of the neighbours adjoining property.

In addition to the cattle, they sow hay, cutting about 900 rolls per year as well as some smaller square bales.

"We grow a bit of extra hay which we sell just to cover costs, it gives us some fuel and seed money for the next season," Mr Wyland said.

For extra income the Wylands also have jobs off-farm.

Mr Wyland has been working for Rio Tinto in the mining industry for 17 years, maintaining a week-on, week-off roster, flying out of Albany, while Ms Wyland works at the local post office three days a week.

When they first began building their cattle operation, the Wylands bought cattle that were affordable just to get into the market.

With the help of a family friend, Santo Pratico, who runs a dairy operation at Greenbushes, they were able to secure some older breeders which were turned over as their calves got to breeding age.

They also had help from Ms Wyland's brother Kevin Armstrong, who is owner operator of Willowbank Agistment Centre along with his wife, Wendy, in the Benger area.

"Kevin has given us a lot of advice along the way with the buying and selling of our cattle," Mr Wyland said.

"We would have struggled to get started without their help."

The Wylands have two separate joining periods so they can have early and a late calving.

The early calves start to drop in January-February and the late calves drop in late April, early May.

This means that they have more options as to when they sell and allows them to sell more consistently throughout the year.

All of their cattle are sold through their local Nutrien Livestock, Mt Barker, agent Charlie Staite.

"We have found Charlie to be really helpful in selling our animals, as he gives good, sound advice as to where the market is sitting and also good feedback on our cattle," Mr Wyland said.

Despite liking the Murray Greys more, they had an opportunity to buy some first cross Angus heifers that they have put an Angus bull over, which they borrowed from Michelle's brother Kevin.

They will be dropping the first calves this year.

Mr Wyland said he has found that, although both breeds are very popular, Angus generally sold better in his opinion.

"The Angus seem to get more money, but at the moment everything is selling extremely well," he said.

"You have to go where the market is." 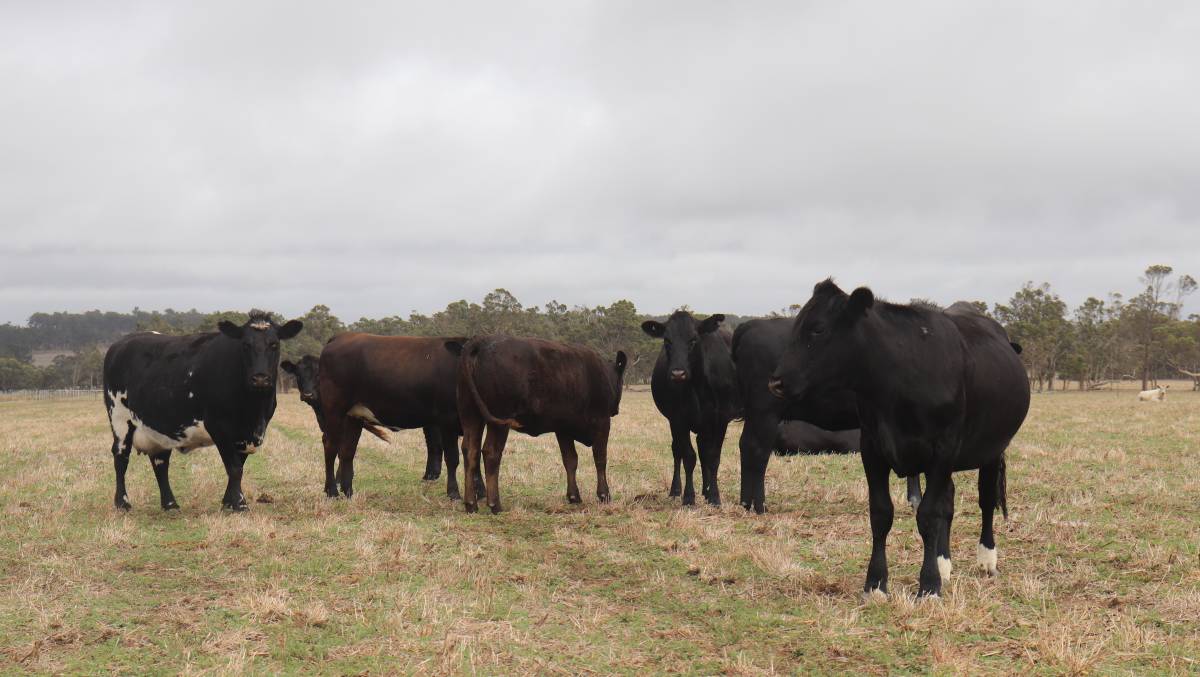 The Wylands run 80-85 head of Murray Grey and Angus cross breeders on their Mt Barker property.

Since entering into the industry, the Wylands said that they have not experienced any price/market downturns.

"We have been very lucky since we have started running cattle because the market has just been going up and up for us," they said.

As for sourcing their bull, they have purchased a Murray Grey from the Mt Barker Community College Farm, as the school has a sound breeding program.

Nick (the bull) has a great temperament, accompanied by good muscle mass and a low birthweight for its calves.

"The money goes back into the school and the bull has turned out to be a sound investment," My Wyland said.

We have had him for two years now.

"We will look to purchase another one down the track, maybe next year."

To ensure productivity within their herd, all of the females are pregnancy tested with any older empty cows being culled, while any younger empty cows are retained for the next joining period.

Feed for the cattle includes hay which the Wylands grows on-farm, as well as naturally growing varieties of clover and grasses.

"We make sure to put on adequate fertiliser for the pasture each year," Mr Wyland said.

Water is their biggest concern, particularly over the past four dry seasons.

To mitigate against the lower rainfall seasons they have dug out some soaks and connected a pump to them, to top up their dams.

In the past, they have had to move cattle to Mr Armstrong's Albany property and they have also carted water to their Mt Barker property.

"The dams are fuller from the pumping last year so we'll do it again this year and get everything topped up again nice and early," Mr Wyland said.

The annual rainfall for the area is usually about the 400-500 millimetres and for the season so far the Wylands have received 45mm more than they did at the same time last year.

Being cattle breeders for six years now, the Wylands are starting to develop some strong genetic lines that they are happy with.

"We will look to reassess in a couple of years whether we continue with the two different lines or select one breed," he said.

In the short-term, they are looking to upgrade and invest in some machinery and equipment that will help improve their operation.

As for their future endeavours, the Wylands are looking to gain some additional land to expand their enterprise to eventually be able to farm full-time.