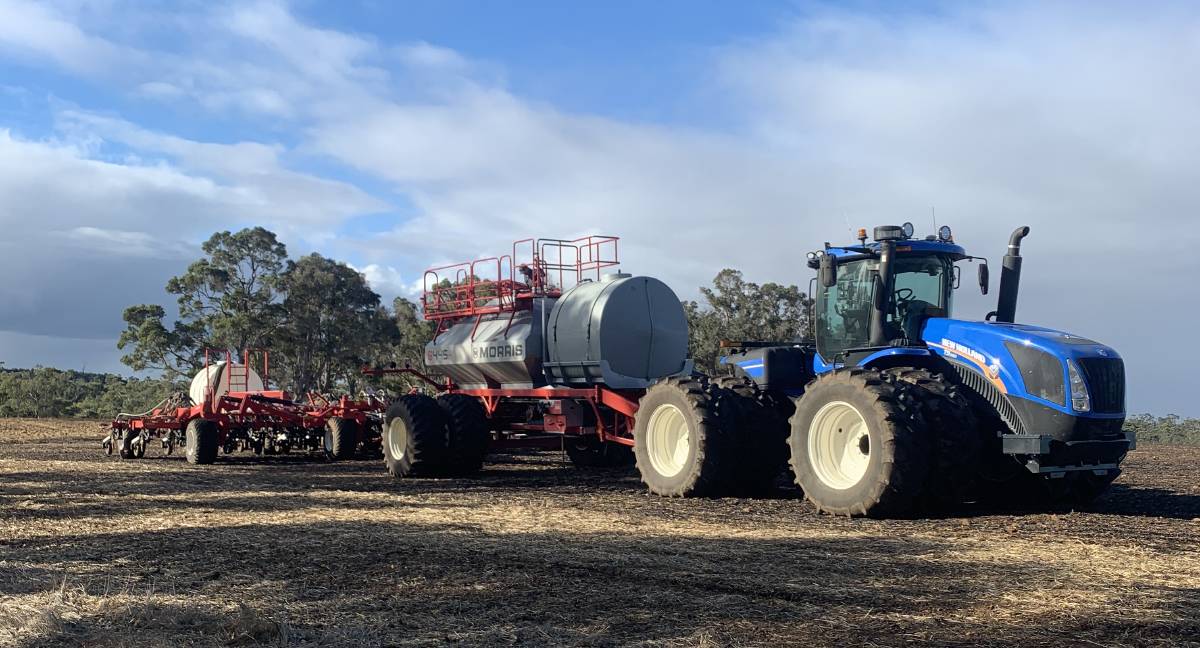 Since just before Easter, Mt Barker farmer Kieran Allison has been seeding canola. He stopped seeding for two days over the weekend while the rain fell before starting up again on Tuesday. Photo by Kieran Allison.

"We won't have that lull or delay of slow germination, so we should see plants coming up after 5 days..."

GROWERS in and around the South Coastal and Great Southern regions hit the jackpot after the weekend's weather systems (not necessarily TC Seroja) produced excellent rain, but with little to no wind.

Frankland River farmer Darcy Clode copped 74 millimetres of rain over Sunday and Monday, with the winds only reaching up to 30 kilometres per hour for a few hours on Sunday morning, before dropping away and a dead calm setting in.

"We had thought about starting seeding last week, but then we saw the forecast and thought we'd pull up and see what happens," Mr Clode said.

"We might have pulled the trigger a little earlier if there was no rain forecast, just to get going, but whether we got 20mm or 100mm, we were still planning to start immediately after the rain and we kicked things off on Tuesday."

Mr Clode's cropping program is 2000 hectares in total - including 800ha of canola with the rest made up of barley, wheat, lupins and a little bit of oats - and for the first time in at least five years, that canola isn't going in dry,

"We'll definitely have a better germination rate with our canola, our strike rate is usually pretty good anyway given that we use wetter, but I think we could capitalise on that quick growth while the soil is warm," he said.

"We won't have that lull or delay of slow germination, so we should see plants coming up after five days which will hopefully speed the program up a bit more in terms of growth.

Top 10 rainfall spots in the south

"Traditionally our cereals have gone into moisture, probably not as much as what they're going to go into now, but I don't think there will be any real advantage to the cereals at the minute."

Over the weekend, Mt Barker farmer Kieran Allison received 55mm, with the rain causing him to stop seeding for two days and topping up the soil profile that was already full.

"I started seeding on March 23 with our winter wheat program - we had plenty of moisture from getting 70mm at the start of February and with the long season winter wheat, the back half of March is when I generally like to get those in," Mr Allison said.

"Once we had seeded that, I just continued on and got going with canola, so we've been on that since the end of March, just before the Easter weekend.

"With the rain, we stopped seeding for two days before getting back into it on Tuesday - all of the moisture is leaving a much nicer furrow at the moment, plus it gives us the confidence to carry on and be confident that we've got a good start to the season."

"Smaller plants don't require a lot of water, so they hopefully shouldn't be using too much of the moisture in the profile as they come up."