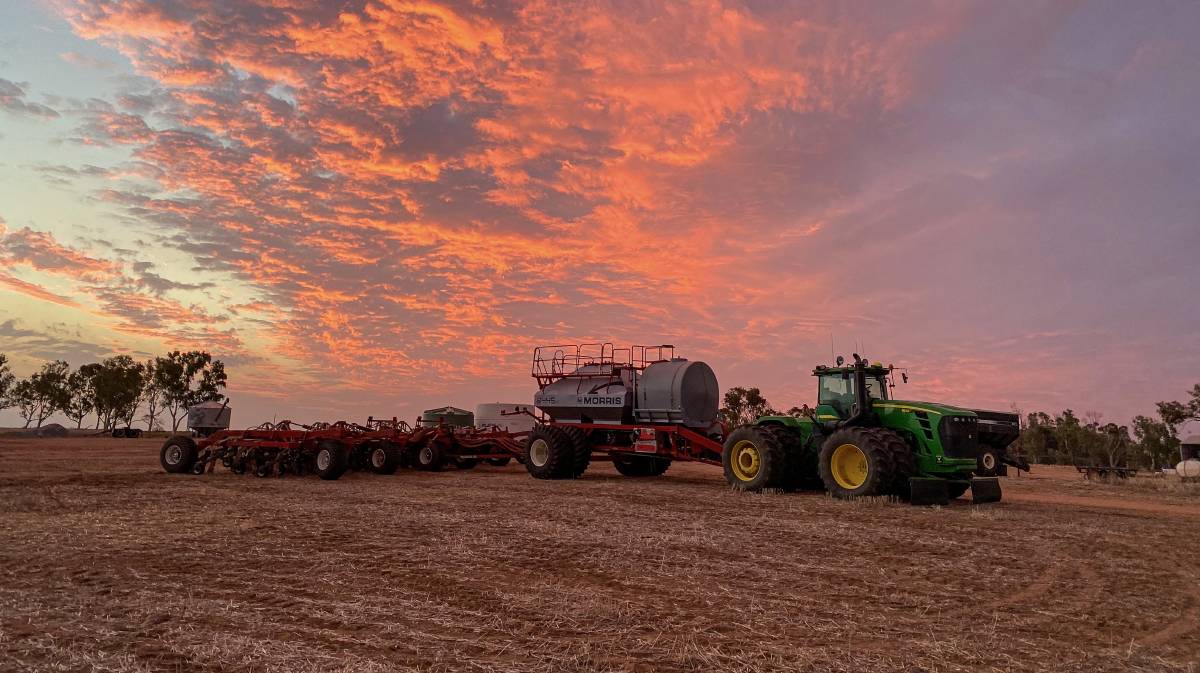 Seeding for 2021 has begun in Coorow. Photo by Stacey Peck.

ALL regions across the grain growing area of Western Australia have received average or above average January to March rainfall based on records dating back 120 years, with the widespread summer rain resulting in most regions starting off the growing season with subsoil moisture reserves.

The summer rain had brought the hope of a good season to growers and with forecast rain from Cyclone Seroja falling over the weekend, WA could well be looking at one of the best early starts for the State since 2005.

According to the Grain Industry Association of Western Australia's (GIWA) April Crop Report, Cyclone Seroja delivered heavy rain to the northern half of the grainbelt at a time of year when cold fronts that usually just lick the south of the State, deliver little rain to the area.

"Once the current tropical activity drops away, the next few months are predicted to drop back to a neutral outlook for rain, which means there is no strong signal as to what will happen," said crop report author Michael Lamond.

"The strong Southern Annular Mode (SAM) that resulted in rainfall being lower than predicted last winter has had a significant impact on wind and temperatures along the west coast over summer.

"The predicted reduction in the strength of the SAM over the coming winter will be critical in influencing weather patterns."

The summer rain that delivered useful subsoil moisture has also germinated weeds that have needed spraying.

In the north, these weeds were mostly annoying summer species that required removal to conserve moisture and mineralised nitrogen, but there were also useful germinations of wild radish which provided the opportunity to get a kill before the season kicked off.

Further to the south of WA, the steady rain and cool temperatures produced winter weeds such as ryegrass, barley grass, brome grass, wild radish and capeweed which is unusual this early in the year.

The opportunity to get a knockdown on these weeds is gold and will take the pressure off pre-emergent herbicides once crops are sown.

"With no host present due to the volunteer barley mostly removed by summer spraying operations, the risk of damaging early STNB in barley will be much lower than normal," he said.

"This will mean there will be less of a requirement to burn barley-on-barley paddocks and give valuable early fungicides a break from repeated use."

The subsoil moisture and chance of an early break to the season has resulted in a predicted kick in canola plantings and this year will likely be back to historically large areas planted of more than 1.4 million hectares.

The increased canola area will mostly be at the expense of cereals, spread evenly over wheat and barley and to a lesser extent for legumes and oat for hay.

Mr Lamond said in the Geraldton zone the season was shaping up to be similar to 2008, with summer rain giving opportunities to sow early and incorporate break crops such as lupins and canola.

"These crops will be up from last year's production due to having increased subsoil moisture and with the rain eventuating over the weekend, growers are likely to get straight into sowing," he said.

"As the previous two years saw more wind events and topsoil losses, growers have since been hesitant to sow break crops dry, however due to the increased rainfall this year, it will not be the case.

Kwinana North Midlands had 100 to 150 millimetres of summer rain, and most growers have covered the ground at least twice for weeds.

The western parts of the region are large oat hay production areas and the uncertainty around price will see that area likely be down 50 to 70pc this year, with significant areas being swapped out to wheat, barley and canola in equal proportions.

Mr Lamond said Kwinana South had 70mm to 160mm of rain, with Northam and West York receiving the highest rainfall and less in the east.

"Some canola, Illabo wheat and other long season wheat varieties are in the ground, with growers sowing canola dry last week in anticipation of rain," he said.

"The canola area in the region could spike 10 to 15pc after the rain, while barley is likely to be similar to 2020."

The Kwinana North East zone received good summer rain and some of the areas that missed out last year have good reserves of subsoil moisture to start the year.

The frost risk increases with April sowing, although for growers in the region the risk is worth it as the increase in yield from an earlier planting can usually counteract the risk of an early cut out to the season in spring.

The Albany West region saw reasonable rainfall of up to 180mm for the year in some spots, most areas were dry down to 10 centimetres and last week canola was being sown dry in anticipation of the rain on the weekend.

The canola area will be up slightly from 2020, with barley and wheat about the same and the canola areas being swapped equally with the cereals.

The lupin area will drop as most growers have reserves for stock feed in silos, while the oats area is expected to drop off a little for growers for the same reason as lupins.

Mr Lamond said some farmers in Albany South were ready to sow dry, although the more risk averse would wait until later in April or early May to sow.

"Due to the current canola price, there will be a push for more area sown - there has been a big swing into hybrid canola in recent years, with at least 70pc of the area in the west and about 30pc in the dryer areas to the east," he said.

"The adoption of soil wetters has taken off, with large areas now being sown with wetters as growers become more confident of getting crops up on low rainfall events."

Summer rainfall in Albany East was good, with 70 to 90mm in most areas but some dry pockets only getting 40 to 50mm.

The canola area has fallen away over the recent run of dry years, but this year there is a chance to potentially slot a break crop back into the rotation.

Mr Lamond said the Esperance region had been experiencing unusually warm temperatures for this time of year, and while rainfall has been good with around 60 to 100mm in some areas, there were still dry pockets.

"There has been a lot of Illabo wheat and Vetch going in the ground with rainfall, though most seeding commenced after Easter or will start soon if there is rain," he said.

"Canola will increase this season and will soon all be in the ground over large areas of the region.

"Barley area is expected to increase slightly from 2020, while pulse crops will be reduced this year due to poor yields and prices last season, as will lupins."

In general across the State, apart from a certain increase in canola plantings, enterprise mix will not change a lot from last year for most growers.