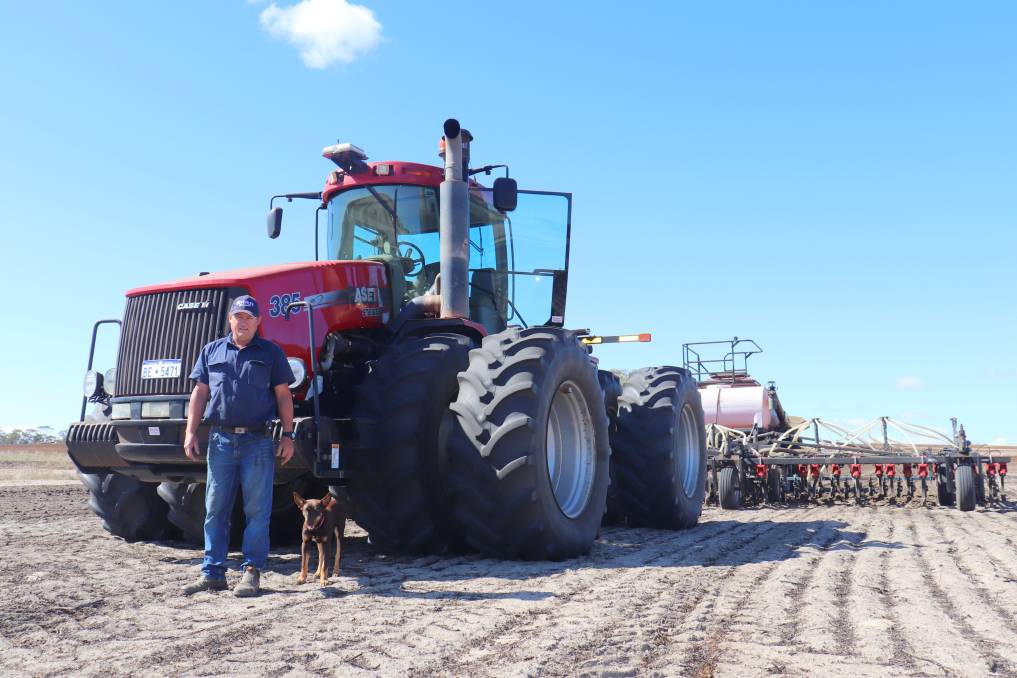 Beverley farmer Andrew Shaw, with dog Millie, started his seeding program on April 12, about a week earlier than he usually does.

Mixed enterprise farmer Andrew Shaw officially started his 2400 hectare seeding program on April 12, after receiving 18mm of rain the night before as a result of the weather events caused by ex-Tropical Cyclone Seroja.

ABOVE average summer rainfall has provided an almost perfect start to seeding in Beverley, although an extra 25 millimetres over the next few days would certainly help to spur things along.

Mixed enterprise farmer Andrew Shaw officially started his 2400 hectare seeding program on April 12, after receiving 18mm of rain the night before as a result of the weather events caused by ex-Tropical Cyclone Seroja.

That rain took Mr Shaw to almost 140mm of rain to date this year, with 20mm falling in mid-February and a huge deluge of 100mm coming down at the beginning of March, in the same event that caused nearby Northam to flood.

"We haven't had a summer rainfall event like that one in at least five years, so we've definitely had more rain at the beginning of the year than usual," Mr Shaw said.

"We got a really small kill last year, but the couple of years prior to that, we didn't do any knockdown work, so this year it will be helpful to take the pressure off the pre-emergent chemicals and start the season with a clean paddock."

There was certainly more summer rainfall this year than last, with 2020 being a relatively dry year in general, however the crops turned out well regardless.

"Growing season rainfall was a little bit below average, but for us that was quite good because we can get quite wet," Mr Shaw said.

"Yields were a bit above average, partially because we didn't get any waterlogging, but while the lower rainfall worked out alright for the crops, it means that the dams are still dry."

This year, Mr Shaw's seeding program kicked off a week earlier than his usual April 20 start date, mainly because of the moisture in the soil, but partially due to him having an extra 600ha to sow this season, compared to last season.

The expanded cropping program is the result of leasing land from neighbours, with an extra 1600ha taken in total, 1000ha of which is being used for sheep.

While a lot of farmers around WA have been destocking over the past 12 to 18 months, Mr Shaw has been increasing his sheep numbers, knowing he would soon have extra land to put them on.

"When the wool market collapsed last year, I decided I'd leave it at that, but prior to last year, the couple of years before had been really good for wool prices.

"When you get the summer rain, you get all the green feed, so it's handy to be able to put the sheep in there and keep it under control until you can get in there with a sprayer." 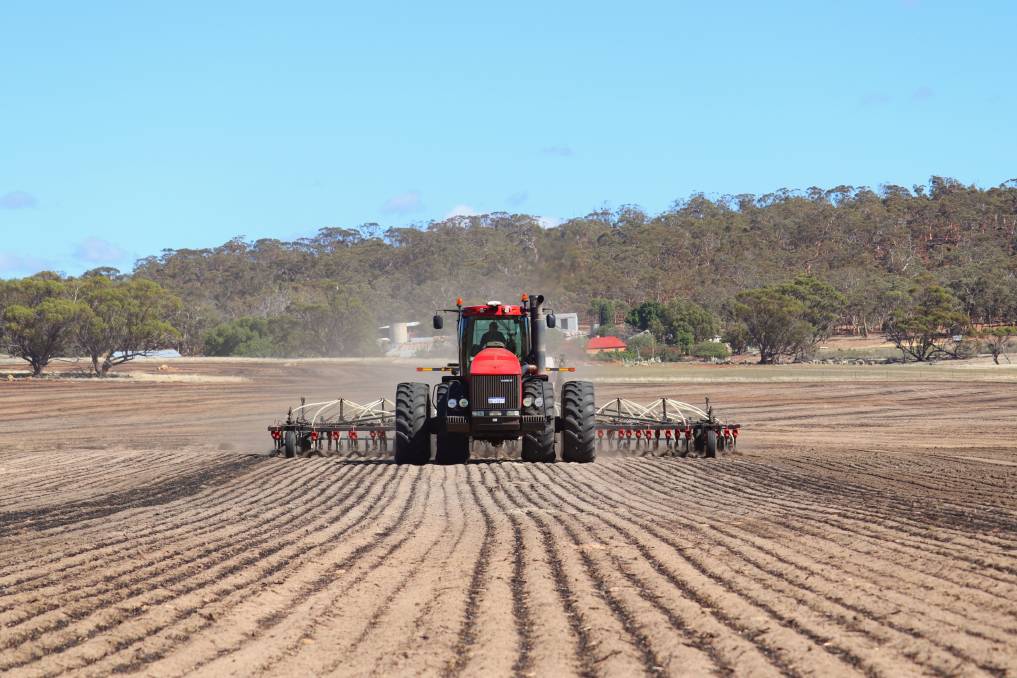 A lot of the extra cropping land will be sown to barley this year, with the plan to sow approximately 1200ha to the cereal.

Mr Shaw said there was originally going to be 150ha for hay, but that will likely swing into barley, as hay contracts are being cut and he doesn't know how much he will get paid.

"China has pulled out totally now, so everyone is competing for the same markets into Japan and Korea," he said.

"I will probably still contract 50ha, who knows how much I'll get for it, but I'm only a small hay grower regardless."

Barley is the majority crop of choice on farm for two key reasons - it usually offers a better gross margin and is the safer option in frost prone, low-lying areas.

Mr Shaw will be aiming to get his barley to go malt grade, but that tends to be a 50:50 guessing game - two thirds of this year's barley is Maximus, which received malt accreditation earlier this year, and the rest is Planet, which will likely go feed quality.

"I grew Maximus for the first time last year and it was an improvement on Spartacus - there was a slight increase in yield and the disease tolerance was a little bit better," he said.

"Jack Frost comes through the home farm, so I don't grow any wheat here, that's grown about five kilometres east of Beverley and it's right on top of a hill which is a bit safer.

"I'm really only doing that bit of wheat to break the program up a bit.

"With the China tariffs, being all barley probably isn't a great idea, plus putting a bit of wheat in is just good for rotations as well."

Chief wheat, Jurien lupins, Bannister oats and Enforcer and InVigor T4510 canola make up the other varieties included in the 2021 program. 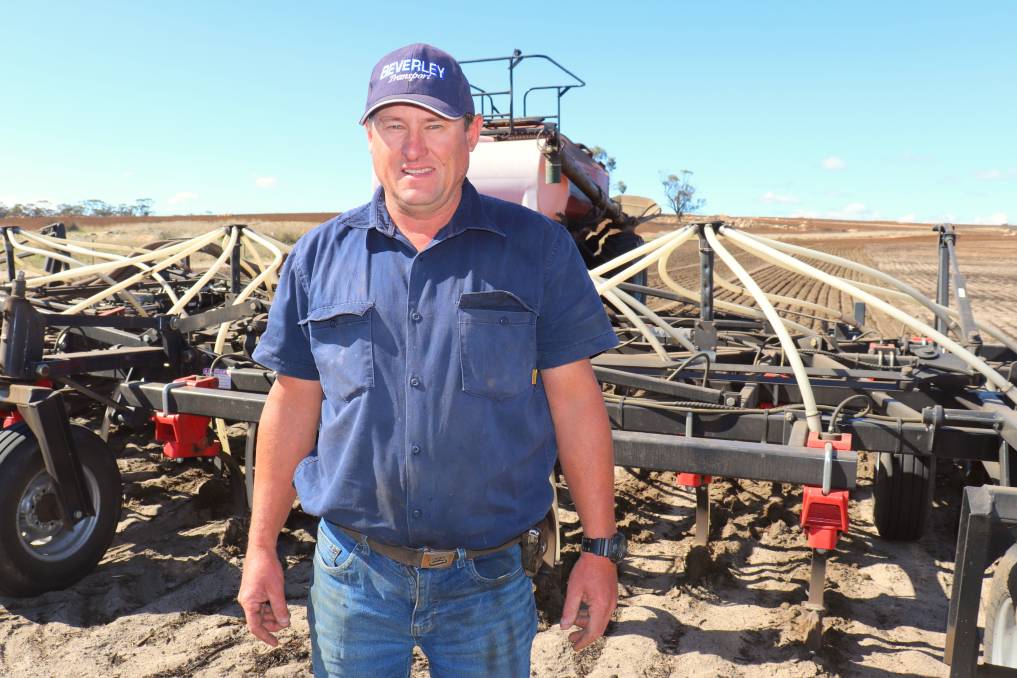 Mr Shaw chose to start his program early after receiving 18mm of rain as a result of the weather events caused by ex-Tropical Cyclone Seroja.

For Mr Shaw, seeding normally takes a month to six weeks, and while he does have a bit more to seed this year, he also started earlier, so should hopefully finish around May 20.

"I don't want to go too quickly - it's important to spread seeding out because that also spreads the frost risk as everything doesn't flower on the same day," he said.

"Another inch of rain within the next few days would be great to keep us going and get the crops germinated, but I don't think that's going to happen.

"If it keeps raining it will be a good season, we've had a good start so far, but I'm not going to say it's a bumper season - I'm not even two weeks into seeding, so I'm not going to make any grand predictions."