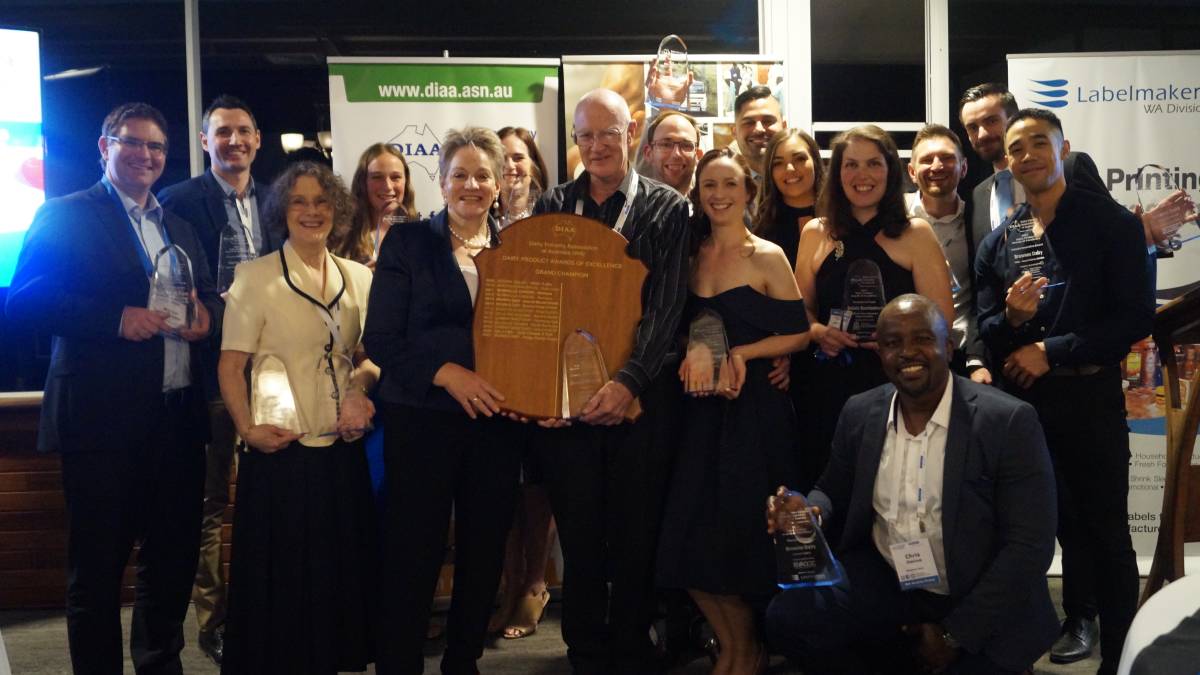 WITH the Dairy Industry Association of Australia (DIAA) WA Dairy Product Competition awards ceremony cancelled last year due to COVID-19 restrictions, the 2021 gala had a record turn out at the Cottesloe Golf Club recently.

This year trophies, gold and silver certificates and product points were presented to the winners at a dinner attended by 119 industry stakeholders and government representatives including WA Agriculture and Food Minister Alannah MacTiernan and Federal Assistant Minister for Regional Development and Territories and dairy farmer Nola Marino.

Products entered into the annual competition span from milk, cream, flavoured milk, cheese, yoghurt, dairy desserts, ice cream and gelato, to non-bovine products, such as those made from goats milk.

Receiving 170 entries from 18 different companies, the competition's chief judge Mike Rammer said the quality of entries had been "incredibly high" this year, with 33 per cent of entries awarded a gold medal and 61pc awarded a silver medal.

"Testament to the high standard of dairy products made in this State is the fact that Western Australian processors are often in the top yoghurts and milks in high-end, prestigious national competitions, including the DIAA Australian Dairy Product Competition," Mr Rammer said.

"It was fantastic to see five members, who have newly joined the DIAA, entered the competition for the first time this year and received high accolades for their products.

"The other two new members and new entrants won medals - Grumpy Farmer won a gold and four silver for their milks and cream, while Modern Foods and Beverages Australia Pty Ltd won a silver for their paneer."

The Butter People based in the Swan Valley region and run by couple Kylie Ward and Kris Perttula said they had been elated by their win.

"We're in the fourth year of our business and a DIAA member invited us to put an entry into the competition," Ms Ward said.

"I wanted a really nice Western Australian butter for my family and I couldn't find one so I started making the butter myself.

"I did that for five years and after that time there was still no WA company so we thought we might as well go for it and start our own.

"The homemade flavour of our butter is very artisan as we don't just hand the process over to machines, so I think it's that involvement which gives our product the home made taste that people crave."

The owner of Gelato Buonissimo, Andy Smith, diversified his businesses' operations during COVID-19 last year, instead selling his gelato to shops and cafes after closing his shop front in Busselton.

It was his daughter, Daniela Smith, who is the company's sales development manager, who decided to enter his gelato into the competition.

"For many years my siblings and I had been urging our dad to enter his gelato into a competition but he had been hesitant as he doesn't like all the fanfare and is a bit too humble in my opinion," Ms Smith said.

"For gelato it makes a huge difference to have good quality milk, and in WA we are lucky to have this amazing produce with our milk and cream and all of our beautiful fruit as well.

"We still have our factory based in Busselton and use as many local ingredients as we possibly can for our hand-potted gelato."

The company also received four gold medals and six silver for its products.

Nine judges in panels of three judged all entries over the course of a day, using European Foods facilities in Osborne Park.

"It was the perfect facility: the Europeans Foods Cheese Cathedral is actually the largest glass cheese fridge in Australia; it's a stunning sight," Mr Rammer said.