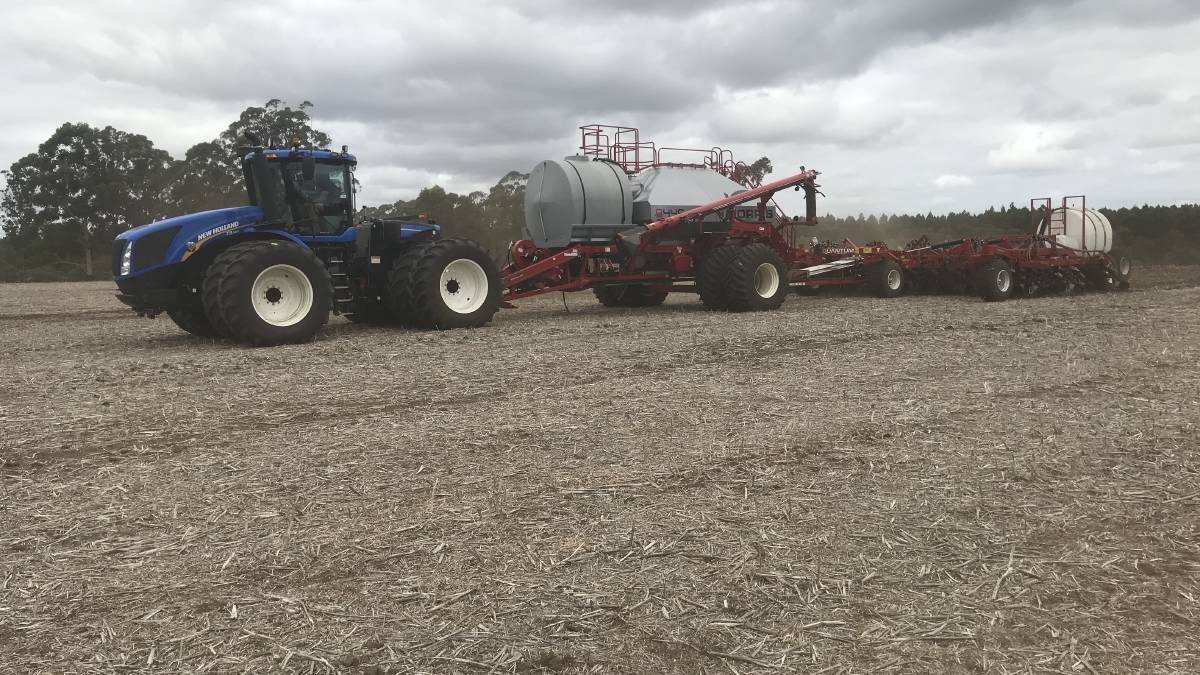 "I wanted a heap of technology so I did a custom build through McIntosh & Son..."

WITH seeding programs starting to gear up across WA, there have been some impressive rigs emerging from sheds to get the job done - including the one that Mt Barker farmer Keiran Allison is using.

He started seeding on March 23, taking a week's break off over Easter to "slow down a bit".

So far he has put his winter wheat crop in the ground and has finished seeding his canola crop - with barley, faba beans and fodder oats still to go.

In total the cropping program covers an area of 2000 hectares.

The seeding program is carried out with "just one seeding rig running".

Mr Allison said as a client of McIntosh & Son, Albany, for the past 10 years he has been on the farm, he has always used the New Holland brand when it came to machinery.

His latest tractor is a New Holland T9.560, with auto guidance by Trimble, which has enough grunt to pull the massive set up he has behind it, including 30 tonnes of product.

There are two profiles built into the computer so if Mr Allison decides that the liquid cart is not required, it can be removed without upsetting the monitoring system.

"I've had three Morris seeders in the past 10 years.

"They have gotten progressively better with each new release, but I wanted a bit more.

"I wanted a heap of technology so I did a custom build through McIntosh & Son and added a lot of technology."

Mr Allison said the seeder had auto packing for forrow packing, auto lift on headlands, sensing control, two liquid systems with two liquid tanks, auto turning at the end of a paddock and eight cameras - four that look at the air seeder bar, with the other four focused on the air cart.

"There's one in each granular box, one monitoring each metering system," he said.

"They are in the granular box so you don't have to jump out and check manually."

This saves time and also wear and tear on the body climbing in and out - not that Mr Allison has to worry because he gets someone else to operate the tractor during seeding.

But he said it does help having the technology doing all the work and having someone in there just to make sure if anything goes wrong they can stop it from getting out of hand.

"Every hose has a sensor, monitoring for blockages," he said.

If the sensor picks up a problem in a hose the alarm will sound through the console in the cab and the operator can stop the tractor and know exactly which hose to fix - or notify someone else who knows what they are doing.

Mr Allison said seeding wise they were working 10 hour days to start with but since Easter they have stepped it up a notch to 14-16 hour days.

"The past three days we ran the seeder from 7am to 2am," he said.

"Operators don't have to do too much, they are just there to make sure things go smoothly.

"Normally we run 24/7 but we started a bit earlier and just plodded along until it rained and then we turned it up a bit."

The farm received 55 millimetres during the recent rains with a further 3-4mm following on from that last week.

Due to the seasonal start, some farmers are seeing their crops already emerging.

Mr Allison farms a total of 4500ha, running 2500 breeding ewes as well as his cropping program.

His farm also has "lots of blue gums as well" and is surrounded by national park.