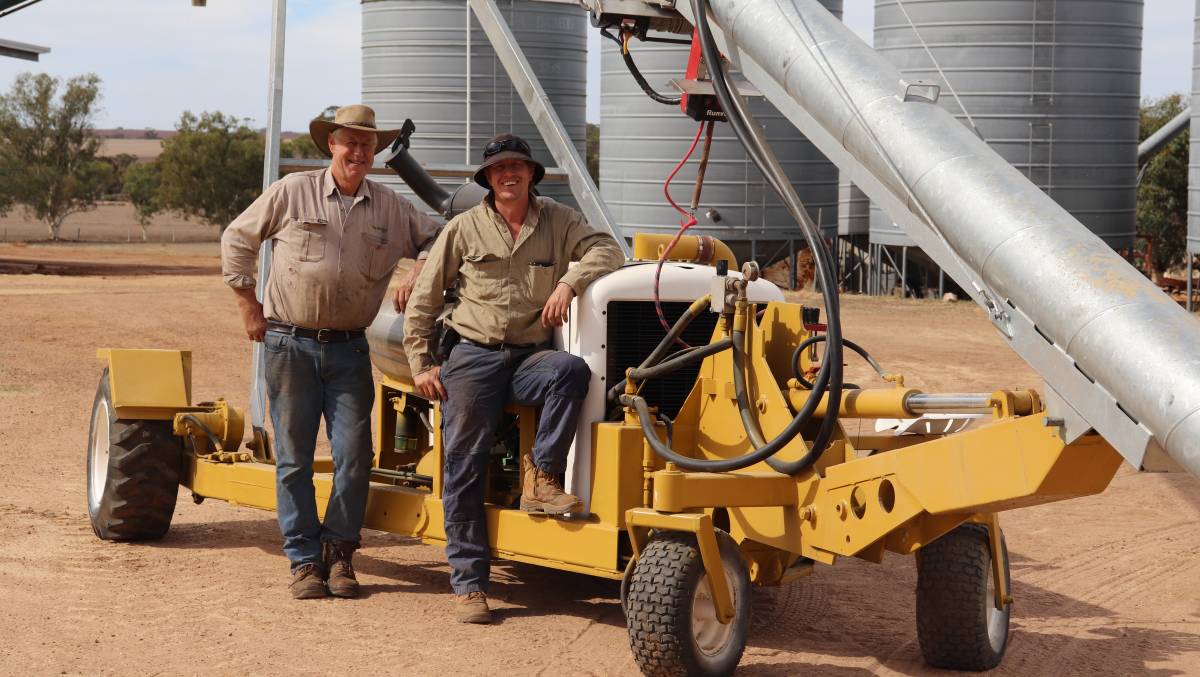 Tony Seabrook (left) and son John with their home-built auger. While there's still a few finishing touches to be made to the machine, it works a treat and can push through 25 tonnes in 12 minutes making what used to be an arduous job of unloading trucks now a productive and easy one.

Solving problems on the farm is not always easy, as York mixed farmers Tony and John Seabrook can attest.

SOLVING problems on the farm is not always easy, as York mixed farmers Tony and John Seabrook can attest.

But through trial and error over the years they have fixed their own machinery issues and produced equipment that solved their onfarm problems.

Tony Seabrook, well known in ag circles for his work as president of the Pastoralists and Graziers Association of WA, while a farmer, can also be described as a tinkerer.

He's passed the skill on to his son John, and they appear to work well as a team.

"We had an idea - we knew what we wanted to do and it was just a matter of having a play and seeing how it worked," John said.

"For the knowledge and know-how dad had the contacts and I relied on his knowledge of past experience.

"As for the welding, manufacturing and painting - that was more my side."

John said they both "think very alike and enjoy the challenge".

"We like thinking out of the box," he said.

In recent weeks they completed spray painting their home-built auger which they built to solve the issue of being able to get underneath the grain silos, as well as reach over the top of the silos.

The auger was built from the skeleton of a Sawyers Valley-built Gundoo cherry picker that they bought at an auction three years ago, before it was stripped and reshaped to meet their specifications.

They had a purpose-built 15.8 metre (52 foot), 28 centimetre (11 inch) barrel made for the auger from Auger Supplies WA, Forrestdale.

John said the size of the barrel meant they could transfer 25 tonne of grain from a truck to a silo in 12 minutes -- way faster than their other standard built augers.

They said attaching a hopper feeder onto the top of the barrel provided a better take up of the grain which enabled the auger to push it through faster.

"The hopper on top increases the capacity of the auger and the force at which the grain is pushed through," Tony said.

The auger has a range of 4 to 10 metres in height.

John said the hardest part of a home built machine was getting the angles right so that it could go under the silos, which were on a lower level than the yard and also get over the top of a 75 tonne silo that stood 8m tall.

"If we want to shift grain in a hurry we'll use this one," John said.

"If we are doing small amounts of sheep feed the small ones work fine."

John said the auger made the job less of an onerous task and saved a large amount of time at a very busy time of the year.

"No one liked unloading or loading trucks into or out of the silos (which used to take 45 minutes), this changed the situation dramatically, and brought the unload time down to 12 minutes," he said.

"It turned an arduous job that no one wanted to do into a productive one."

Tony said they lengthened the cherry picker frame by 1.3m and had to widen it by 1.5m to get the weight distribution accurate.

They bought a four-cylinder, two-stroke Detroit diesel motor, which they dropped into the frame.

This drove the hydraulic pumps, one for the auger drive and the second for the ground drive, while the raise and lower function is done by using a six-tonne electric RUNVA Winch.

Tony said the powerful 110hp motor was a bit of an overkill for what they needed, but it only cost $500 and would get the job done without any problems.

The fuel tank was out of an old taxi.

About 90 per cent of the bits and pieces needed to finish the auger they had on the farm already from previous purchases and projects.

"All the bits we had in the shed," Tony said.

Because of the size of the auger it has to be able to drive on its own accord, which it does at a top speed of 4km/h.

They attached an old metal seat from a vintage tractor for comfort.

"If we need to move it in a hurry, the drive hubs have a manual disengage thus allowing them to be disengaged and towed as required," John said.

While the auger is in working order and a welcome addition to the farm "it still needs a bit of tidying up, such as covering the hoses, to protect them from birds," Tony said.