A game of patience: Brothers Adam and Peter Gardiner

The latest in storage shed technology from Entegra has been at the heart of the successful haymaking business Gardiner Bros in the New South Wales Riverina.

A truck loaded with hay pulls across the weighbridge on an overcast autumn morning at Caldwell in the NSW Riverina.

Peter Gardiner momentarily leaves the nearby office to press some buttons to weigh the load and catch the driver.

It's not long, before the truck was on its way, turning out of the red dirt driveway and edging slowly onto the otherwise quiet bitumen road.

This fresh smelling oaten hay will be delivered to a dairy farm at Corryong, in Victoria's north east.

The hay trade for Peter and his brother Adam has been slower this season, a combination of ample homegrown feed throughout eastern Australia and lower livestock numbers, off the back of drought.

Riding the supply and demand wave of the Australian fodder industry is just part and parcel of the business.

"If it's green everywhere, domestically, you are just sitting and have to wait," Peter said. "It's a game of patience."

"You either sell everything in a dry year or you cannot sell anything," Adam added.

Adam described it as a "back-up".

But like many things in agriculture, even the best laid plans can go awry.

"This year we had planned to take 5000 tonnes directly off the paddock (to the exporter)," Adam said. "We can store 20,000 bales here and that would have worked out well for cashflow and storage, but because of the rain, everyone was up in the air they didn't know what was going on. They didn't take the 5000 tonne, they took 17 tonne."

What the brothers did next has laid the foundations for the future of their business.

Adam and Peter bought 6000 Dorper sheep and 400 cattle, mostly cows and calves. The latter have been housed in a newly constructed feedlot on the property- the former, will go into containment pens so they don't graze crops.

Livestock will be how Adam and Peter will add value to their hay and diversify their business risk.

"This year there will be more return feeding it (the hay) to sheep and cattle as opposed to giving it away," Adam said.

"We needed to create our own options, which is what we are trying to do with buying livestock."

Other Gardiner hay has been stored in paddocks with caps protecting the fodder from the weather, but the best quality sits beneath three large Entegra hay sheds.

Each shed is ten large square bales high, with a total of 3300 fitting under the shelter. Unlike most hay sheds, these face to the north to allow faster drying and easier loading. 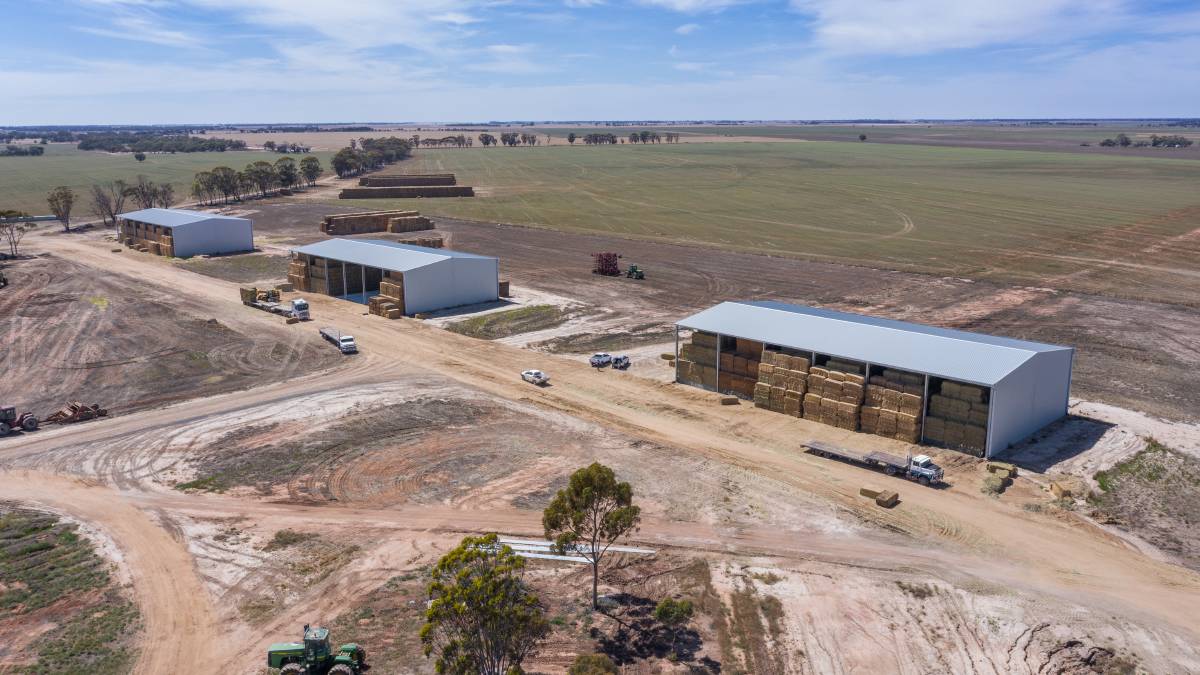 In March, hay had started to "move" to exporters, but the reality of the season meant Adam and Peter still had to patiently wait for an uptick in demand.

"We will be cash negative for the first six months and hopefully be back in the positive," Adam said.

Adam and Peter talk about the hay sector and its ups and downs like seasoned professionals, it's hard to imagine they are 32 and 29 years old respectively.

But fodder production is in their blood. Growing up at Bamawm in northern Victoria, their dad Greg grew Lucerne.

At 19 years old, Adam moved to the NSW Riverina and bought a farm, Peter followed a few years later and the brothers have gradually built their landholding to amass 15,000 acres (6070ha) - or the equivalent of ten farms.

Hay wasn't initially part of the brother's cropping rotation at Caldwell, NSW. Their first few years in the Riverina, they were reluctant to break the local mould- sticking to the tried and tested rice and wheat combination, plus or minus sheep.

The area has an average rainfall of 350mm, but dry finishes had started to impact grain yields, while working with the temporary irrigation water market was less dependable than the patchy rainfall.

Growing hay on their new farms made sense for the brothers, but it was harder to get local service providers onside.

"(Agronomists) were all anti-hay back then," Adam said. "They were all set up to do a grain crop, the inputs are also a lot less for hay."

"After a hay crop, you haven't got many weeds either, our chemical usage would be half that of a grain grower."

They persisted, and today they produce both hay and grain - along with their livestock - with either broadacre enterprise dominating plantings depending on the season.

"It's not rocket science to work out what's better, doing a tonne-and-half of grain or cutting 4-5 tonnes of hay off the same field," Peter said.

"The big costs with hay are at harvest and if you aren't set up for it, it becomes pretty expensive," Adam added. "It can turn a lot of people off, especially if you don't have sheds."

"We've got big piles of pipes and stops and things lying around," Peter joked. "In case we go into irrigation again," Adam said with a laugh.

You get the impression; these brother's never rule anything out completely.

Making hay among the rice and wheat

Adam and Peter leveraged some of their dad's hay clients - dairy farmers from the Bamawm area - when they first started production, before making a move to supply the export market.

Volume and quality were the key to their "foot in the door" with hay exporters.

The first year they sent 15,0000 big square bales to the export market, these bales were both green and had a "good sugar content" following an exceptional season.

It was a different story last year.

During the 2020 harvest the business produced about 40,000 bales of hay, but untimely rains affected quality. It rained for three-to-four weeks - every weekend- while the hay was curing.

The brothers didn't touch the hay during this time.

"We leave it until we are ready to bale it," Adam said. "We don't touch it, don't rake it. Because we have a fairly big program we can't just go and flick all the rows over."

"Then (doing that) you lose what colour you have got," Peter said. "Our weather damaged hay still has pretty good colour really."

It had been six months since Gardiner Bros Farms had started cutting hay and in March trucks had only just started delivering some bales to exporters.

"This is compared to a couple of years ago when it was dry, we were taking hay straight off the paddock to exporters," Peter said. "The exporters though, they generally pay us for storage as well."

The brothers explained how exporters always ask for a feed test for the hay they purchase, but 80 per cent of their quality grading is based on the appearance of the fodder.

"You could have the best feed test with an exporter, but if it visually falls out of spec it will be knocked down," Adam said. 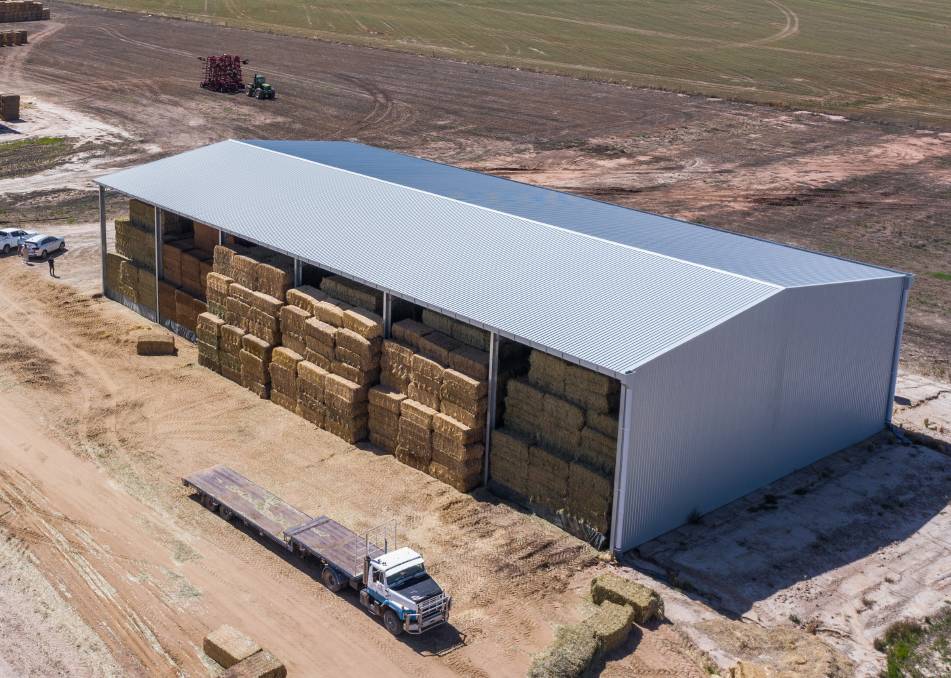 Managing this business risk is how Adam and Peter's sheds and livestock fit into their farm strategy.

"With the sheds, we can sit it there, we are not price takers," Adam said.

"(Exporters) will take shedded stuff over outside stuff any day, especially when we are getting into June, July and August."

"The bales we have started to move now - to export- they were all shedded," Peter said. "We always put what we think is our better hay into sheds for obvious reasons. Now, the hay quality outside is still okay, but as soon as bays in the sheds start emptying, we will refill them."

"If we do get big rains on it, then we will take the top bale off and shed the rest," Adam said.

These "waste" bales - which can also include the bottom bale from a stack - go directly into the brother's livestock operation.

New blocks added into the Gardiner Bros Farms rotation generally get sown to barley for a couple of years.

After that, they move into oats, for a "good clean up of weeds". This system gives the brothers the option to cut barley for hay to supplement their oaten fodder production.

Paddock preparation has been key to ensuring quality hay and a smoother harvest.

Disc-chaining oaten hay paddocks removes stubble by mulching it back into the ground, while flattening the ground after seeding has prevented soil clods in hay.

"We had a 12-inch air seeder when we were growing more grain but we have gone back to ten inch so we sow it and then it gets rolled after it gets sown," Peter said.

Depending on the season, Adam and Peter top dress their crops as soon as they are out of the ground to encourage more tillering.

Hay cutting generally begins in September and all hay is baled at less than 14 per cent moisture. No preservatives are used for fodder conservation.

Balancing the risk and rewards

Negotiating rain events continues to be the toughest as a wet harvest requires a fallback plan for hay in case it's no longer suitable for the export market.

"There's a lot of people this year caught out, first time growers," Peter said. "Their hay has fallen out of spec and they haven't got sheds and there are stacks of hay sitting everywhere."

But there have also been risks which can't be controlled from inside the farmgate.

Recently the industry was informed that 25 of Australia's 28 hay export plants hadn't received a registration renewal to export to China. The registrations for these plants expired on February 28, 2021 and applications to re-register these export plants had been made to the General Administration of Chinese Customs.

This news followed unofficial Chinese customs bans on some Australian produce including barley, beef and cotton.

"Whether it doesn't come from us, it comes from another country and we just fill that gap," Adam said. "It's like playing Tetris."

Opportunities are something the brothers create for themselves and they have plenty of ideas brewing to create more certainty in their business.

Continual growth's also on the cards with scale efficiencies proving cost effective and a way to maintain staff.

"Management is certainly a lot easier when you have scale," Peter said. "Say we've got 5000 bales to go and stack. We can give someone that job and they can go out there for a week. Where as if you had 500 bales they would be back asking for the next job."

"We also have six months of carting to the port now for two workers from this season, and then two other workers will be carting hay for the rest of this year," Adam added. "We can set the whole year up."

The brothers have achieved a lot just over a decade and now, with all their required machinery and infrastructure, further growth will be simpler.

They aren't tied to any specific production system and their plans can be altered - according to whatever mother nature or the market throws at them.

"We always have a finger in a few different pies," Adam said.

"We haven't come up with the right solution yet (for risk management) but we are always working on something."

Read more about how sheds can fit into your business.

The story Going against the grain in the NSW Riverina first appeared on The Land.