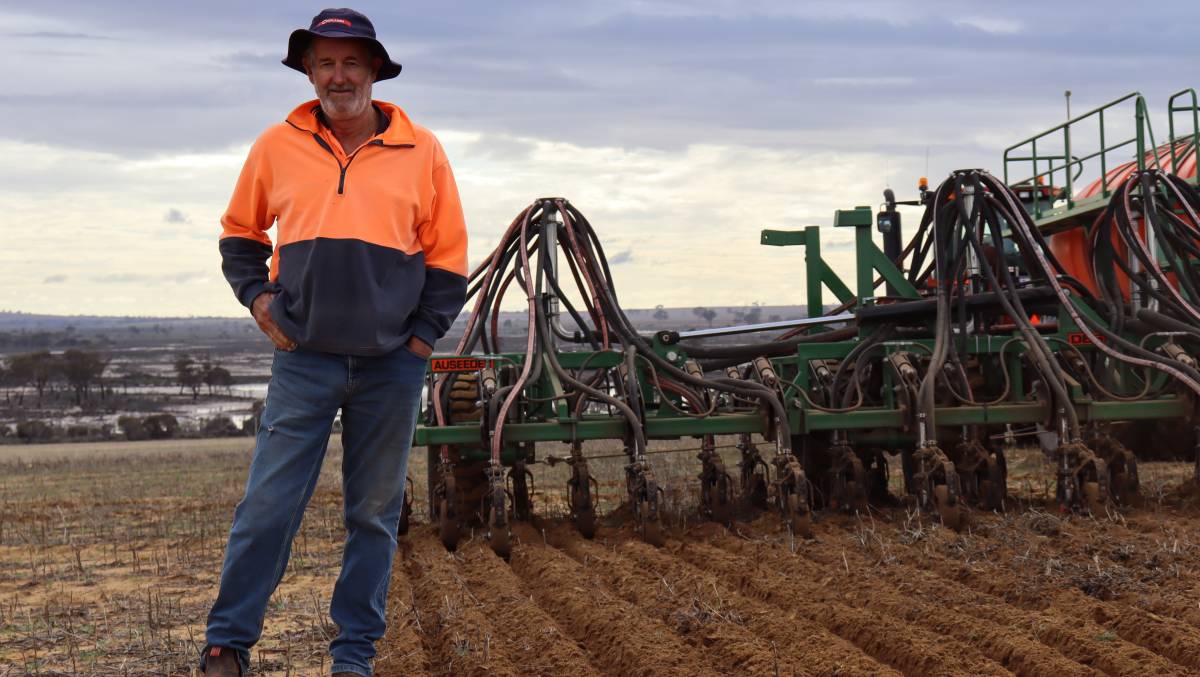 DANGIN livestock and cropping producer Greg Richards recorded 57 millimetres of rain in just over 24 hours recently which he said was "a pretty special start" and "could set him up for a good year".

That is compared to about 35mm in February last year which pushed the 2020 season start out to May.

Mr Richards, who farms with his sons Haydn and Jack, started seeding canola and lupin across his property on April 9 and when Farm Weekly visited two weeks ago, he was a third of the way through his winter cropping program.

His farming operation is built on cropping, including canola, barley, wheat, lupin and oats for hay, as well 3600 head of ewes, which are currently lambing.

Mr Richards said the rain was good for crops and in turn livestock, as it would reduce the need to hand feed.

"It is awesome, we have dry sown for the past three years now and to have an early start like this could potentially set us up for a good year," Mr Richards said.

"Also I have all my sheep on lick feeders, so they won't need as much grain now, which means it could potentially also be a good year for my stock.

"The key is having that rainfall so early on and now I hope the cold fronts come in normal time at the end of May to early June.

Mr Richards said substantial moisture in the profile meant the next rainfall event wouldn't need to be as significant.

He said an 8-10mm event would suffice and follow-up rain in the next two to three weeks would be ideal.

"Things would germinate now, but being a farmer, after you've gone two weeks into winter you get a bit stressed out for some more rain," Mr Richards said.

"Last year we were only getting 10mm rainfall events (that was our highest) and it was only filling the top profile up, so the bottom profile wasn't getting anything at all - that's the difference.

"That was quite regularly, about every 10-14 days.

"But this year, having had a good dollop now, those smaller rainfall events would be fantastic in keeping that profile wet."

Barley makes up the majority of Mr Richard's program, as with Intervix herbicide available there is a chance to dry sow more of the crop.

And while he hasn't sown canola for the past two years, this season's early rainfall and a "pretty damn good" price boosted his confidence to plant a crop.

Mr Richards said chemicals in genetically modified (GM) canola enabled him to get the crop in dry.

He added that if ryegrass popped up in crops, it could be taken out with the chemical.

"We haven't sown canola for the past two years.

"If there's no moisture by the end of April then we don't sow it - it just puts too much pressure on the canola crop.

"The temptation to lock canola in is there, but I think maybe we should wait a little bit before we do it.

"Amazingly, the prices still appear to be increasing, so that would be a fair enough reason to wait a bit."

As for barley and the worldwide market, Mr Richards said he would let the politics happen.

He said while Australia did lose its China market, it managed to find others and prices had remained strong.

"We are still cropping barley, I think you have to," Mr Richards said.

Mr Richards said the key was to yield a couple of tonnes per hectare.

Also benefitting from the recent soaking are Mr Richards' ewes, which are set to lamb on green feed which will increase lambing percentages and it would "take a bit more pressure off the mums".

"She (the ewes) will have a bit more nutrition and won't have to eat as much grain," he said.

"They will still have access to grain and hay, which I feed them.

"But with a little green feed they will be better potentially and that all important price come the end of August, we will see what happens.

Mr Richards added with hay in the shed, water in dams, a good underground water supply and canola out of the ground things were travelling along pretty nicely.

"Even the Quairading Bulls Football Club are going alright," he said.

"It's hard not to be positive out this way at the moment."