"I've never seen one that big before, it was just under two feet (61cm) across. 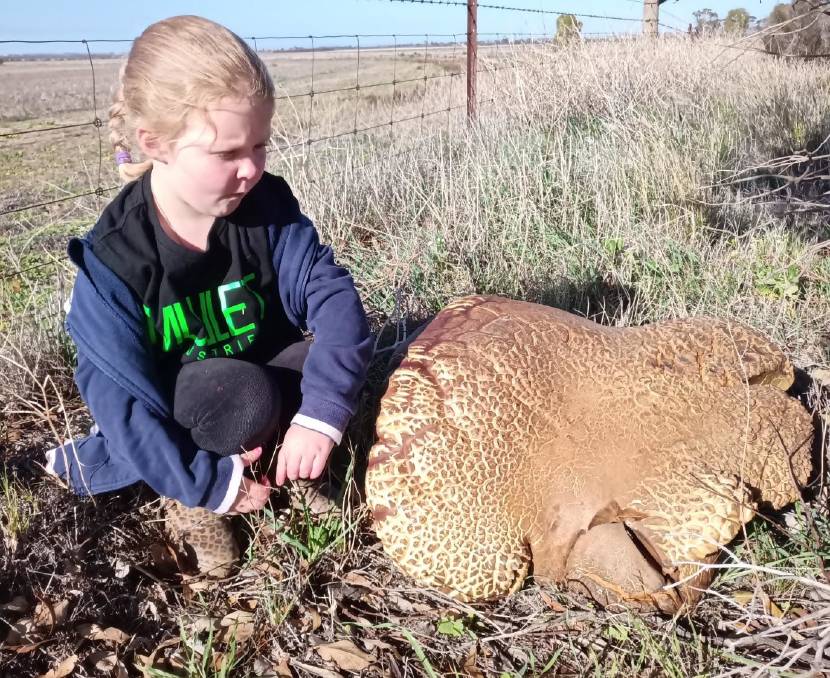 But Kellerberrin electrical contractor Peter Mitchell could not believe his eyes when he spotted a massive mushroom growing near the edge of the Kellerberrin-Yoting Road on his way to a job on a local farm last week.

"I always have a bit of a look around as I'm driving to jobs and I spotted this thing beneath a little tree growing between the edge of the road and the fence line," Mr Mitchell said.

"I've never seen one that big before, it was just under two feet (61centimetres) across.

"I had my daughter Kimberley, who's four, in the truck with me and I got her to go and sit next to it to show the size - it's a big machine.

"I remember dad (Kellerberrin farmer Geoff Mitchell) used to call them horse mushrooms, but I don't know why.

"We used to have one grow under a tree, just like this one, in the ram paddock on the farm, but it never got as big as this one.

"I don't know if the spores drop under the tree and then they use it as a host plant or not.

"One this size is not something you see very often.

"They pop up out of nowhere and they only last about a week before they start to cave in.

"But this one was in its prime," he said.

- Horse mushrooms are a large edible fungi that were once commonly found in paddocks and got their name from a preference for growing in horse manure.

They do not like phosphate fertilisers so are more commonly found growing in decaying vegetable matter on country roadsides than in paddocks these days.

The visible cap and stalk are the spore-releasing 'fruit' of a much larger underground network of thread-like fungus called a mycelium.

There is no scientific difference between a mushroom and a toadstool.