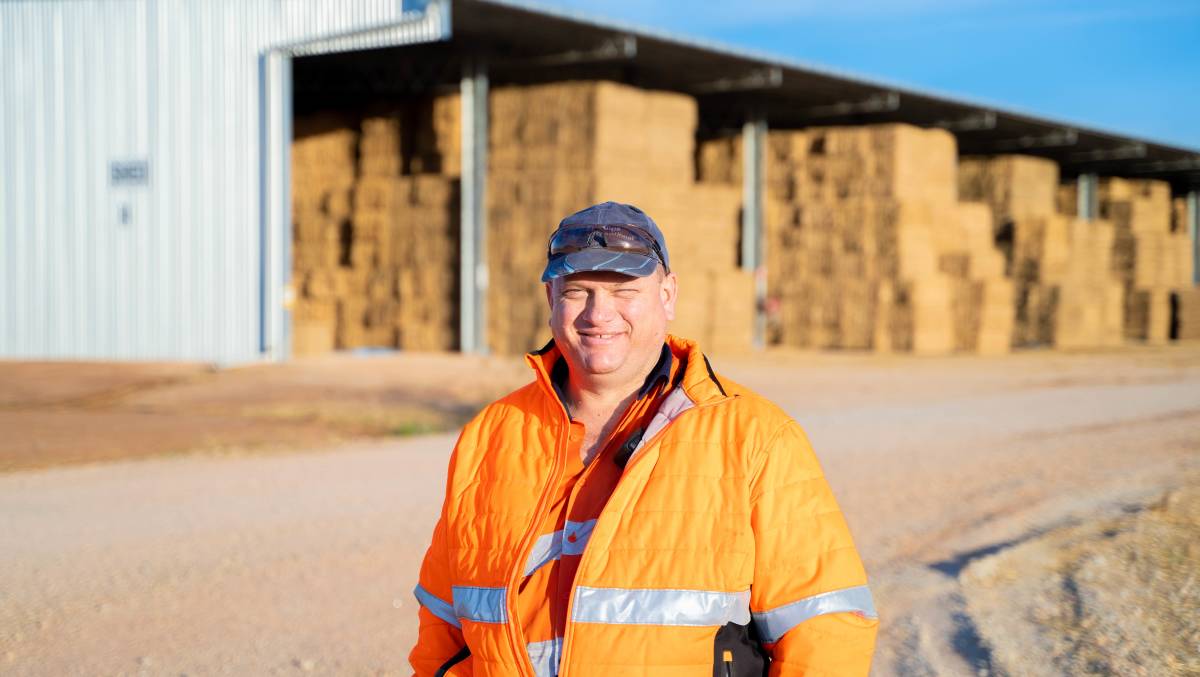 A TELEHANDLER drives into the shed and deposits a bale onto the end of a conveyer belt.

This bale immediately proceeds towards the start of a long production line, while other - more compact blocks of fodder - are stacked on a pallet and wrapped with clear plastic film at the other end of the shed.

Diederik is the Mallee Hay General Manager of Operations.

This busy Entegra shed is the engine of Mallee Hay - a hay and straw export processing facility at Ultima near Swan Hill in Victoria.

The delivering, pressing, packing, and wrapping continue inside. The speed and process are mesmerising.

Pressing one of these 50 kilogram bales of straw takes 12 to 14 seconds; the same size bale of hay takes 10 to 12 seconds, Diederik explained. These bales can be sold singularly at 50 kilograms or cut in half for two 25 kilogram bales.

Outside - and away from the machinery - it's quiet.

Shipping containers, full of hay, sit lined-up and adjacent to the shed with the end doors ajar. These had been inspected and certified for export. An attached note indicates they shouldn't be touched.

In a few days, these 24 to 26 tonne containers, will be lifted onto a train just a few hundred metres away, destined for the Melbourne Port.

"We started with road transport, but now about 90 per cent goes on the train," Diederik said.

"At the moment we have two train services a week, at one stage we had three, but we are trying to run a longer train, so we have two services. It's much safer for road users with the trains and more cost effective for us." 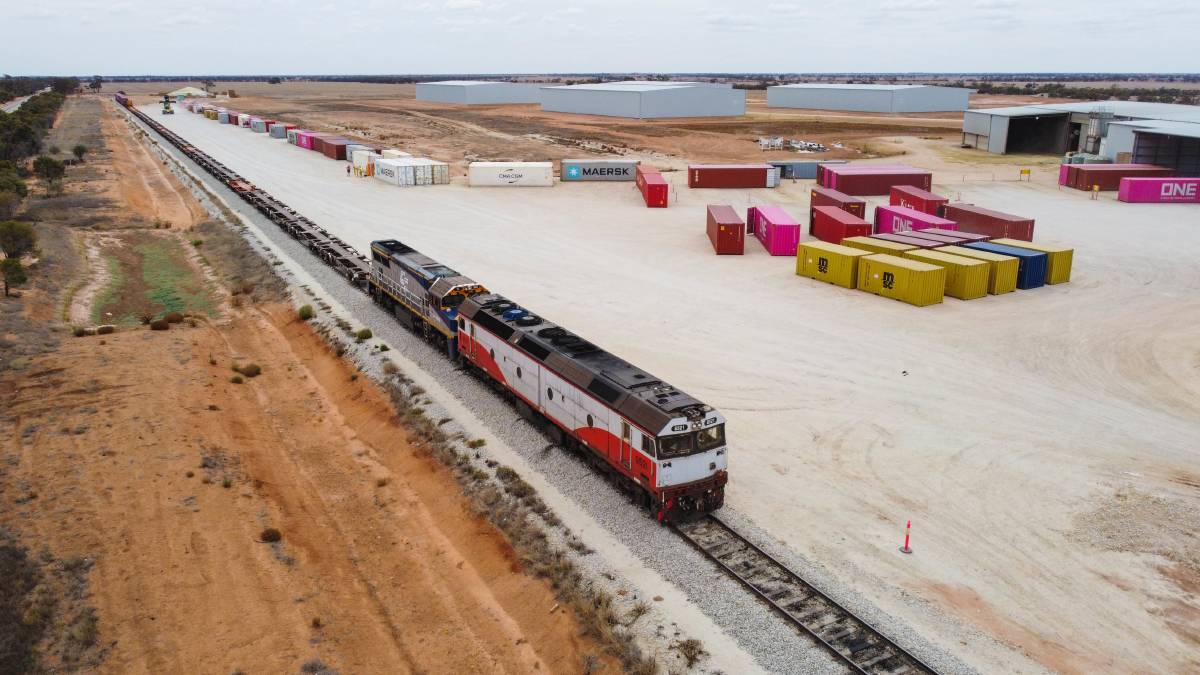 Containers are lifted onto a train waiting just a few hundred metres from the Mallee Hay processing facility and destined for the Melbourne Port.

The rail freight part of the business is operated by separate logistics and transport companies, with stone fruit and other Wimmera-Mallee produce sharing the train ride to international markets.

Mallee Hay is where the hay and straw, purchased from local farmers, comes for processing before its exported to China, Japan, Korea, and Taiwan.

In April, this facility still had access to the Chinese market. A number of other Australian hay exporters had not been able to renew Chinese export accreditations which expired at the end of February.

From the paddock to the globe

Some of the fodder processed at Mallee Hay comes straight from paddocks onto the production line. Other hay and straw is stored in sheds.

"Sometimes, if it's a good season, we'll go out and fill the sheds up," Diederik said. "Sometimes farmers like to bring their product in and empty their sheds."

Japan has always been the largest market for Mallee Hay, and in recent years, Korea and China have grown.

"Some will go direct to users in Japan and China while other hay, sent to Korea, goes and sits in a warehouse and people go and shop for it," Diederik said. "They will go and buy a small bale and put it on the back of their small trucks and off they go."

Most customers are beef or dairy farmers, but Mallee Hay has also pressed straw for Japanese mushroom production and horse bedding.

Bale size remains an important marketing tool, as smaller sizes make it easier for customers to transport and use. Compressing hay or straw also makes sense for the exporter.

"If we don't [press the bales], if we try to load it just like it is, we only get between 14 to 16 tonnes in a container and then it's very rough also," Diederik said.

"Through processing and pressing it, we get 24 to 26 tonnes in a container. We wrap it and make it look presentable, it's much easier for (the animals) to eat and much easier for a customer to handle as we actually make 25 kilogram bales for them."

Compressing is just part of the process of preparing hay and straw for export.

As bales are taken apart, they can be blended with other hay or straw to improve the product's appearance.

"We might have to put two farmers hay together," Diederik said. "Most of the time we will be blending, we have the ability to blend various farmers together."

It's all about appearance when it comes to selling hay. Customers "buy with their eyes", according to Diederik.

Feed and annual ryegrass toxicity tests (ARGT) back-up visual assessments of the hay, determining the grading and price for the farmer.

"We will ask for a feed test, China asks for feed test," Diederik said. "We feed test here and some are sent to a third party for verification-especially for the China market."

Fodder export inspections, certification, and fumigation, are completed at Mallee Hay as Diederik is authorised to complete this process.

Containers filled with hay or straw are then sealed until they arrive at their destination.

The country is covered

Spreading the geographical risk between Victoria and Western Australia paid dividends for the exporter this year, as the Victorian harvest was plagued by wet weather.

"This year started well, the hay was cut and then it got all the rain on it and the quality was not so good," Diederik said.

"We still managed to find markets for it, but in Western Australia the hay quality was much better."

Mallee Hay has 50 to 60 growers "on its books" and many supply fodder every year.

The intake of new growers depends on the season. Diederik said anyone interested must contact Mallee Hay for more information.

Some hay gets purchased in windrows in the paddock, but sale contracts are completed once its baled, according to Diederik.

Ideally, hay - on-farm - would be protected from the elements, in a shed, until delivery.

On arrival at the exporter, the hay delivery truck drives across the weigh bridge and the hay is tested for moisture. It must be less than 14 per cent moisture for the hay to be accepted.

Hay also arrives for processing with traceability tags provided by the exporter.

"The most important thing in our industry is traceability and ARGT testing," Diederik said. "I need to say which grower supplied it [and] how much [of that hay] is in each container."

Chemical usage has been the most common reason why hay would need to be traced back to the grower, Diederik said. Traceability of blended hay is possible thanks to meticulous records.

Hay stored in sheds retains its quality, Diederik said. "It might get downgraded from the original grade, after its cut and baled, if it got wet," he said.

"It would be downgraded because it's not the same quality it originally was, but if you put it in a shed, the quality won't degrade further."

Demand for Australian hay will remain strong until the middle of the year when the Timothy Grass, from the US and Canada - which competes with Australian oaten hay - hits the market.

Most customer orders get placed up to six weeks in advance, according to Diederik, but some request their hay or straw for an entire year. Custom-built Entegra sheds are the engine of the Mallee Hay export processing facility at Ultima near Swan Hill in Victoria. Picture: Supplied.

During the COVID-19 pandemic, it has been business as usual at the Mallee Hay processing shed.

Logistically though, exporting hay during a near world-wide lockdown was challenging.

"There was a little bit of a delay with containers [earlier] but not as much as in Western Australia," Diederik said. "In WA there was more of a shortage of containers but now shipping lines have slowly increased container availability, so there's a quicker turnaround."

The fodder sitting in the shipping containers at Mallee Hay would leave Australia for China within the next 28 days.

In the meantime, the export supply chain would be refilled.

Telehandlers deliver bales onto the processing line, they are blended, packed, and wrapped. Time and time again. Afterall, this is how Australian hay growers service the world.

AT A GLANCE: The Australian export hay industry

Read more about how sheds can fit into your business.

The story Exporting Mallee Hay to the world first appeared on The Land.