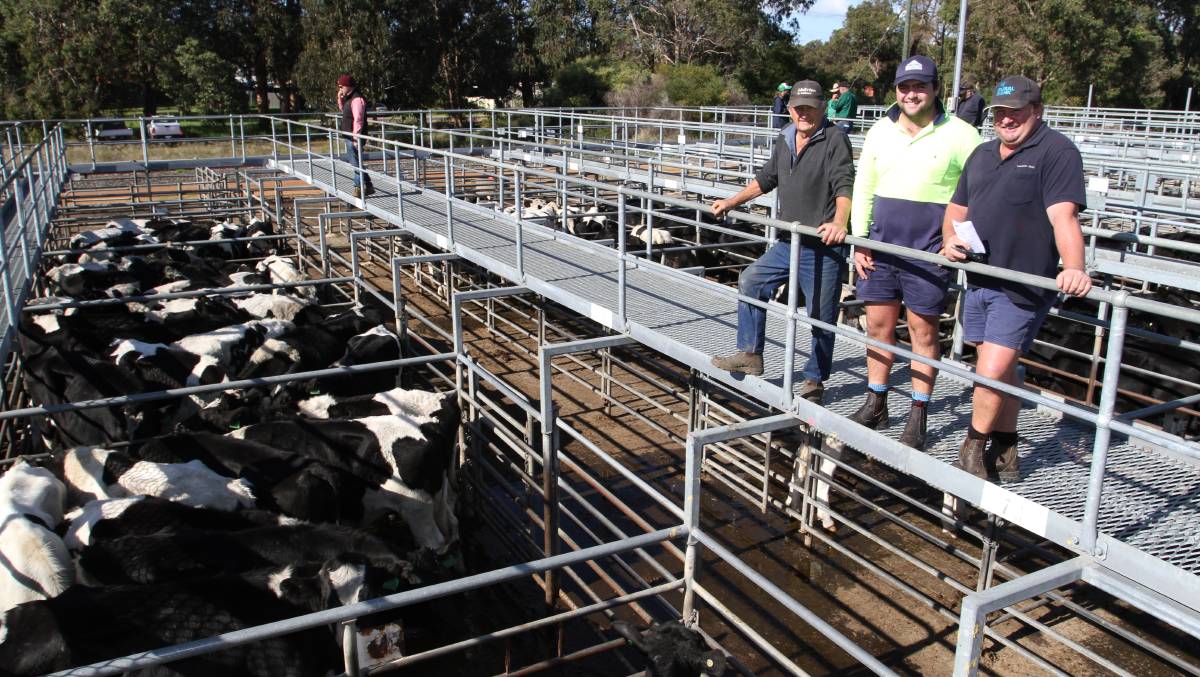 STORE cattle continue to be in hot demand, resulting in one of the strongest markets for dairy origin cattle seen at Boyanup last week.

The yarding consisted of predominantly first cross and Friesian steers, ranging from grown types to young poddies and with the exception of a pen of young first cross heifers, the yarding was all sold liveweight.

Lotfeeders and South West graziers who were buoyed by the excellent start to the season, again had to raise the bar to secure replacements which drove the sale's overall average across all descriptions to a bumper $1542.

The sale rounded out with an excellent annual line-up of commercial yearling Angus bulls from Hydillowah Angus, Hyden, which sold to $7000 and averaged $5000.

Among the sale highlights was lightweight first cross and Friesian steers reaching record liveweight values at the venue of 720c/kg and 760c/kg respectively, to be up by 50c/kg on the previous sale. 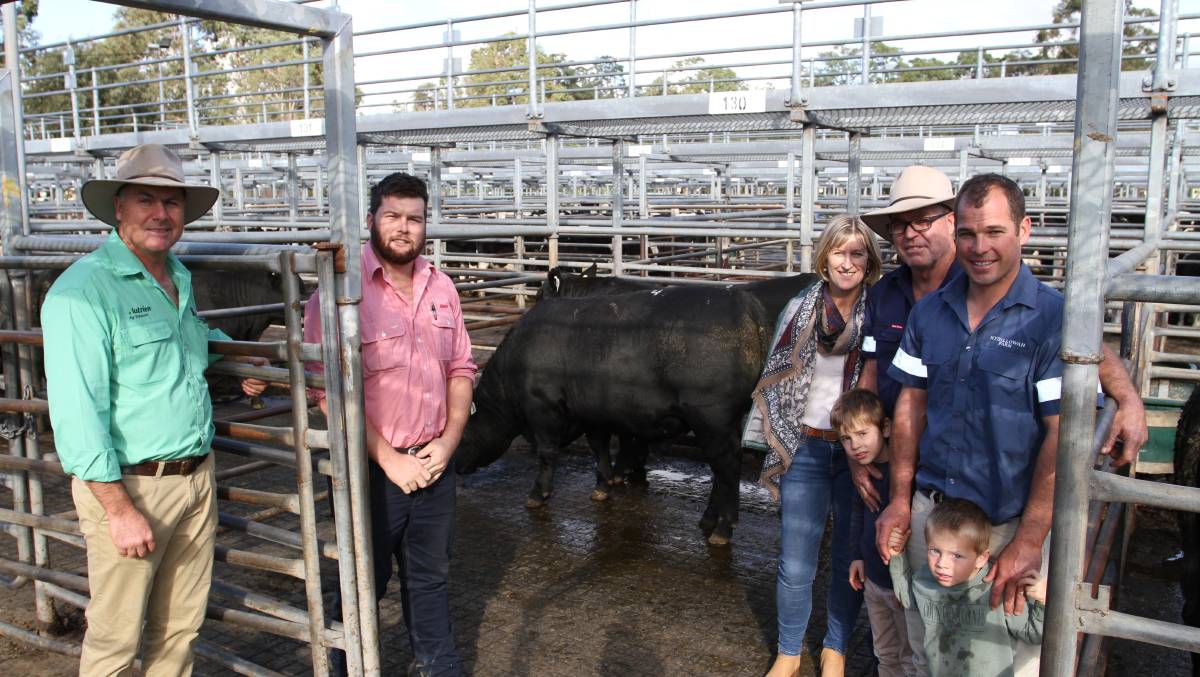 The sale was interfaced on AuctionsPlus with 589 catalogue views resulting in 14 registered bidders logged in locally and from New South Wales, Victoria, Queensland and South Australia and 39 online bids placed across eight lots.

First cross Angus-Friesian steers got the sale underway with Greg Jones strong from the outset, collecting the first three pens and paying the section's $2108 top price at 412c/kg for six steers weighing 512kg offered by

A Figliomeno and the next highest price of $2089 for five steers tipping the scales at 507kg from the paddocks of AR Hall & Co, also costing 412c/kg.

Gundagai Dairy, Boyanup, was among the volume vendors in the sale including a quality draft of 70 Angus-Friesian steers weighing from 359-457kg. 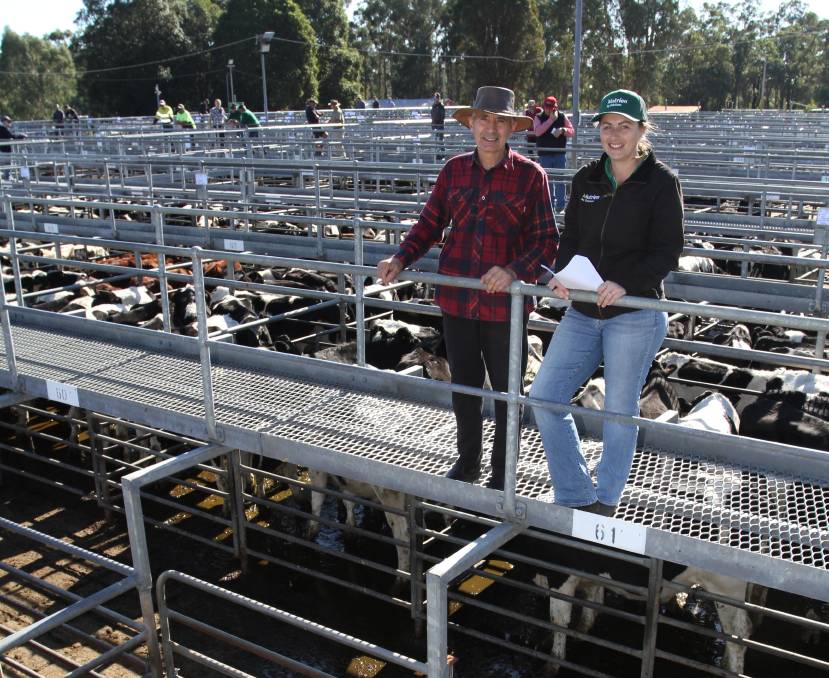 Vendor Laurie Sorgiovanni, IR Sorgiovanni, Harvey and Lyndsay Flemming, Nutrien Livestock, Brunswick/Harvey, with the Sorgiovanni family's Friesian steers that sold for $420c/kg and $1752 at the sale.

The dominant numbers of Friesian steers were next up with Mr Jones paying the sale's overall top price of $2296 at 320c/kg on behalf of a processor for a duo of 718kg steers offered by RL Britza who offered 56 steers in the sale.

VA & MP Wright snapped up the following pen of four steers weighing 609kg from BM & L Fielder for the next highest price of $2179 at 358c/kg.

Representing another order, Mr Jones was the most influential buyer in this section finishing with 16 pens of Friesian steers for this account including 10 consecutive pens.

Graziers upped the ante on Friesian steers less than 400kg.

Included in Mr Gardiner's extensive purchases was the next highest liveweight price of 742c/kg paid for 18 Friesian steers weighing 137kg from M Angi & Sons to cost $1014.

Mahaffey Family Trust offered 40 Friesian steers, weighing from 218-237kg, which sold to $1313 and 584c/kg and also included two pens of Jersey cross steers which topped this section of the sale with Mr Gardiner paying the $1195 top price at 430c/kg for five weighing 278kg, while Mr Taaffe bid the 670c/kg top liveweight price for six steers averaging 138kg from the Angi family to cost $927.

A feature of the sale was the annual offering of 25 commercial yearling Angus bulls from the Mouritz family, Hydillowah Angus, Hyden.

The well-bred and grown youngsters aged 13 to 14 months attracted plenty of support to see a complete clearance of the team at an improved average of $5000.

At the same sale last year, 21 Hydillowah bulls sold for an average of $3910.

Brendan Miller, Elders, Geraldton, made the long trek south and representing the Quartermaine family, Ucarty Holdings, Dowerin, finished the sale with four bulls including the $7000 top price paid for a 545kg son of Mordallup Bardi M390.

There were a number of buyers that sourced multiple bulls including Gandy Timbers with three bulls bidding to a $6000 top price for a 530kg son of Bardi.

Mr Pollock collected three bulls for two clients paying to a $5000 top as did EW & ME Rose with three new bulls spending from $4000-$4750 while Jamie Abbs, Nutrien Livestock, Boyup Brook, secured two bulls for a client.