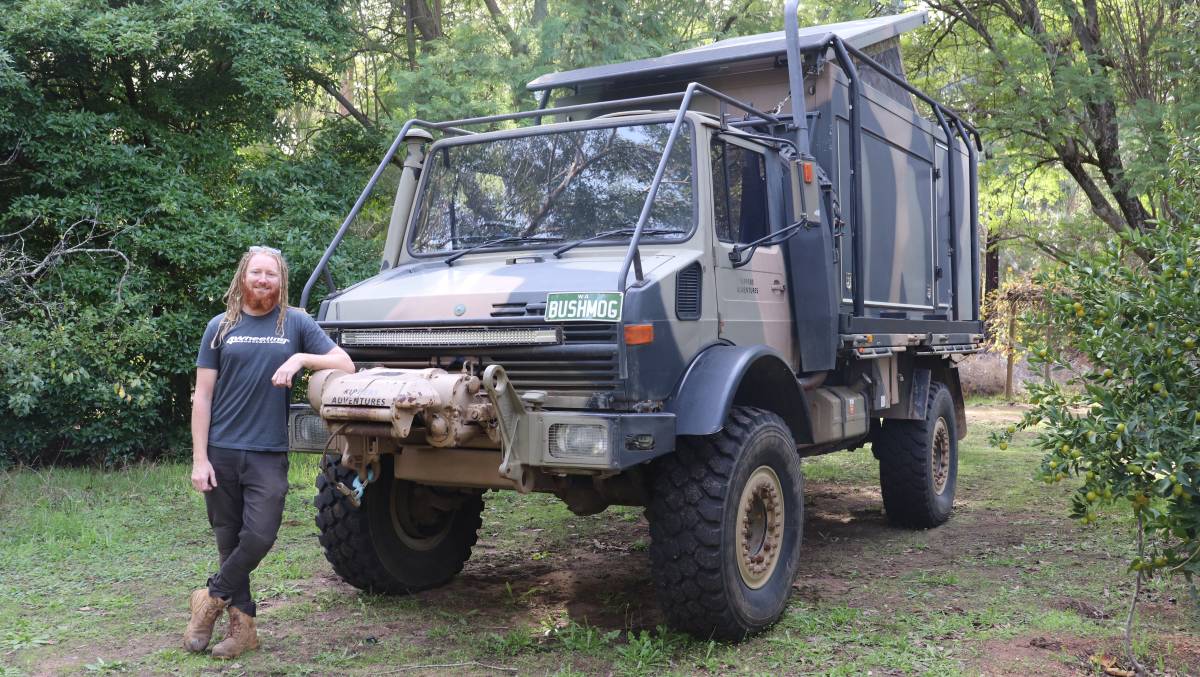 Sawyer's Valley four wheel drive enthusiast Rhys Kipper Iredell-Scott has taken the hobby to a whole new level after purchasing an ex-military Unimog truck which he turned into the "King of Off-roading" with a home-built camper fitted out on the back.

Taking 4WD off-roading to the extreme

While most 4WD campers and off-roaders stick to standard vehicles such as Nissan Patrols or Toyota LandCruisers - Kipper (as he likes to be known) decided to go one step further and purchased an ex-military Unimog from an online auction for $25,000 (without even seeing it).

The purchase five years ago made him "hurry up" and get a Heavy Rigid truck licence so he could drive it.

Kipper did a one day course in Perth and passed the test first time, much to the delight of his friends and neighbours who say the truck is the coolest thing around - for off-roading.

The 5.7 litre turbo diesel, flat deck Unimog, was previously used by the Australian Defence Force on the east coast and had been used for carrying sea containers with inbuilt workshops.

Unfortunately, it had also spent a bit of time outdoors and a few small rust spots were starting to show.

Kipper said when he first got the truck it had some mechanical issues that needed repairing - but once they were sorted out he undertook a huge project to turn it into the "king of off-roading".

For his birthday one year he got the number plate 'BUSHMOG' fitted after a couple of beers with his father-in-law.

With the help of some friends and family, the electrician by trade modified it with hard core 4WD suspension - including fitting a lift kit, as well as replacing the old standard tyres with Michelin (46 inch) tyres with Hutchinson bead lock rims and housed under flare extensions to make it road legal.

The makeover took a while and included welding a frame to the front and cab of the truck to protect it from tree branches - as it took up a lot more room in the bush than the usual 4WD. A view of the Unimog with the rear camper doors and roof open and the specially designed ladder for easy access.

He also placed a single cab HiLux canopy on the back to begin with and bolted two couches to the tray at the very rear of the flat deck for a bit of fun with his mates while at the beach.

Kipper said he also spent a year in Kalgoorlie hitting the off road tracks in the bush around working to pay the bills.

He said it was hard to pick just a few favourite off road trips - or locations.

"We've been fortunate enough to have visited so many beautiful spots across WA in the mog," Kipper said.

"But if I had to pick it would be all the beautiful beaches down south we drove to.

"We lived in Albany for a bit and it was so easy to just jump in the mog and search for a secluded beach somewhere down a bush road.

"One time we took the mog out and drove along the coast between Walpole and Albany.

"We stopped in at a few beaches along the way and made our way deep into the West Cape Howe National Park where we sat and watched the sun go down with a cheeky cold 'bush chook'.

"The mog just motored along the whole time and made for a really enjoyable trip.

"We even pulled a young bloke out who found himself a bit stuck on one of the boggier tracks.

"All in a days work for a Unimog driver I suppose - ah the memories."

The full makeover on the flat deck took shape after about eight months of building, welding, crafting and painting the custom made camper.

The camper is made from aluminium panels with a steel frame, painted to blend in with the camouflaged military truck.

There was also a "lot of trial and error" with the wiring to install a TV, computer port (where Kipper can download and edit videos and images of his adventures), as well as solar power for lighting and charging back- up batteries to run the Engel fridge/freezer. The Unimog cabin is a basic set up which has been added to with reversing camera, navigation and extra communication systems.

After all that work and a lot of fun off-road, Kipper put the truck up for sale recently for $80,000.

"I built it for keeping but circumstances have changed.

"We'll do one more trip over east in it and hopefully we'll be able to sell it to put down a deposit on a home.

"I won't get the money back I put into it but that's OK."

Kipper said if it didn't sell he would continue to tackle the extreme 4WD courses around WA.

"Guys with Patrols and LandCruisers have been amazed at what this thing can do," Kipper said.

He said he installed a HiLux seat for more comfort while driving and when going anywhere he usually took the back roads to see a bit more of the country and, as well as to stay out of the way of the faster traffic.

With the new tyres it can travel at 90 kilometres an hour on open road - "all day long". nside the camper is the home built slide out table and chairs as well as the computer monitor and digital communications systems which Kipper installed with his electrical know-how.

Without the added weight of the camper it consumes about 18 litres of diesel per 100 per kilometre.

The BUSHMOG is fuelled by two 160L fuel tanks with a manual ball valve switch.

Because of the bigger tyres the vehicle is now fitted with a satellite speedometer which provides a more accurate speed reading.

The size or the tyres and raised suspension means there was "heaps of clearance" with the underbelly about 500 millimetres off the ground which is perfect for going over heavily-rutted tracks.

Kipper said there was a 1000 kilogram winch on the tray that is used to change the 250kg spare tyre, which he said was "a bit of an overkill but worth it if you needed to change it in the middle of nowhere".

There is also room next to the spare tyre for a six horsepower motor which is used on an inflatable dinghy which is also onboard when Kipper wants to go fishing.

Being a military vehicle, there is a roof hole above the front passenger seat, originally made for gun operators - and because of its origins, there is also no air conditioning,

"You stick your head out the window and enjoy the ride," Kipper said.

The windows have all been tinted to the darkest legal tint to help with the heat issue.

There have been a few moments in the past five years when he got the truck stuck in the mud - nothing new for a 4WD enthusiast but one reason why he went for the Unimog was because it came with a 6.5 tonne winch at the front which runs off a PTO.

He also fitted a dual motor Sherpa winch to the rear of the Unimog in case the front got bogged, as well as a reverse camera and LCD screen in the cab so he can reverse without crashing into things - which he said was easy to do.

All up the truck weighs about 10t, which he said was a "very heavy rig - especially on salt flats".

That was something that he said was important to keep in mind when off-roading to prevent being stranded in the middle of nowhere - although he could survive easily enough for a few days in the bush with the two stainless steel 80L water tanks fitted and enough back up power to keep the food in the fridge fresh.

There's loads of space in the camper for a queen size mattress, which is raised up and has storage areas underneath - some which can be accessed from the outside.

The roof can be raised up by two 150kg actuators, wired to a wireless gate remote for easy control.

It has a camouflage canvas insert around the base of the roof to prevent rain or bugs getting in when open.

For entertainment he has built in a HDMU display compatible computer screen with home made slide out red gum chairs and table which can double as a kitchen table as well as an office.

He also built a fan vented box for computer storage.

At both ends of the camper there's storage compartments - with the rear being built as a workshop with a 3.5 metre slide out rear toolbox.