In 2018 Rebecca Sims, with dog Luther, decided she wanted to return to the farm full-time, becoming the fifth generation to work the family property at Beverley.

"We are always learning and finding what works best for our operation."

A SCIENTIFIC approach is paying off for the Sims family and its farming operation at Beverley.

The property has been in the family since 1920, reaching the 100-year milestone last year.

Darryl Sims, alongside his wife Jo and three daughters Emma, Carly and Rebecca, is the fourth generation to farm the property.

In 2018 Rebecca decided she wanted to return to the farm full-time, becoming the fifth generation.

The Sims are running a flock of 1200 Dohne ewes that are mated to Dohne and Poll Dorset rams on 1300 hectares.

At one point in time, the flock consisted of a mix of purebred Merinos and first cross SAMM ewes mated to Merino,SAMM or Poll Dorset rams.

This system became too complicated, so to simplify their operation they chose to continue with Dohnes and Poll Dorsets.

"The Dohnes are big, strong, good-doers with a good mix of wool and meat carcase traits," Mr Sims said.

"We did consider adding some Merinos back into the flock, but ultimately decided we weren't passionate enough about the wool."

In conjunction with their livestock operation, they also run a cropping program for a 30:70 ratio.

The hay is produced for domestic use and is delivered to Perth to be cut for chaff for the equestrian market.

"It gets rolled and delivered throughout the year," Mr Sims said.

The rams are put in with ewes in mid-December for a six-week period, with lambing beginning in May.

For the first time this year, they are looking to trial creep feeding their lambs.

This allows mating to be pushed later so the ewes are more likely to lamb down onto green feed, while still finishing the Dorset lambs by spring. 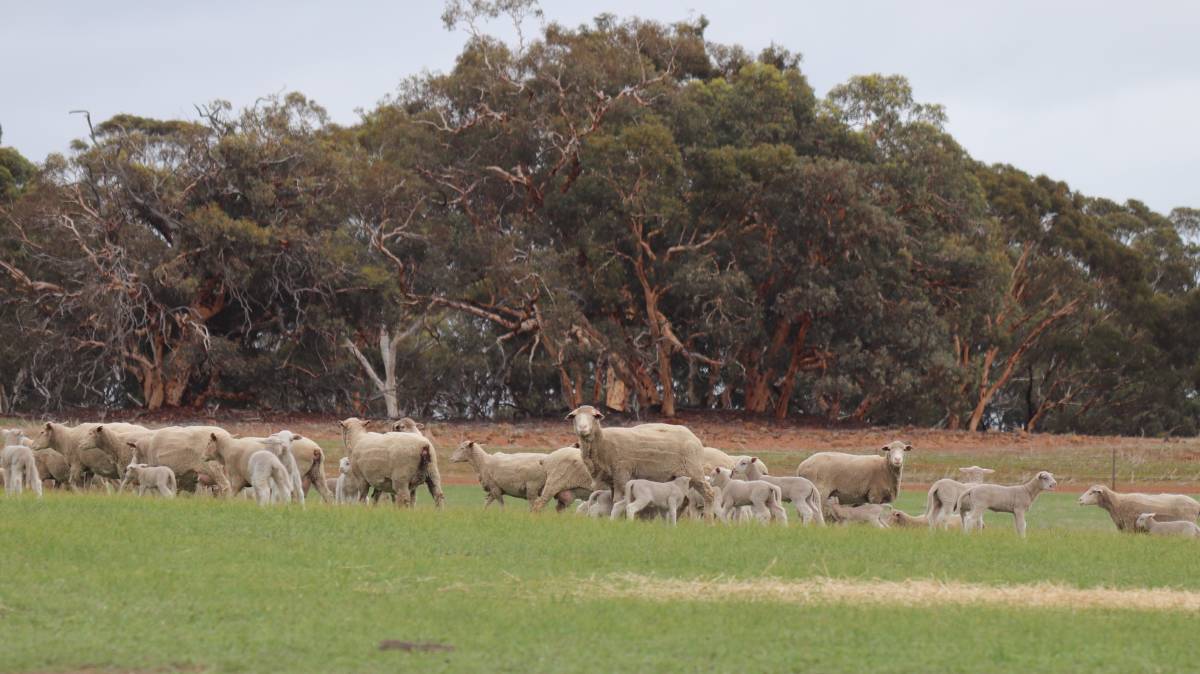 The Sims are running a flock of 1200 Dohne ewes being mated to Dohne and Poll Dorset rams on 1300 hectares.

By creep feeding at lambing, they are hoping to increase the development of the rumen to get the lambs to grow quicker in a shorter amount of time.

"The past few years we've been selling a high portion of our Dorset lambs straight off their mothers in September-October and have been getting good prices," Mr Sims said.

Their lambs are generally sold straight to abattoirs.

When sourcing their Poll Dorset rams, the Sims use the Fairclough's well-known York-based stud Stockdale and over the past few years have sourced their Dohne rams from the Browne family's Chirniminup Dohne stud.

"They're very good rams and it's important to put the money into a good bloodline," Rebecca said.

Pregnancy scanning for singles and multiples is done each year.

Lambing percentage has been a focus for the Sims and they are starting to achieve just over 120 per cent lambing rates, with up to 60pc of the flock having/being multiples.

This year's scanning showed, of the Dohnes mated, 385 ewes are singles and 415 have twins, while of the Dorset mated ewes, 190 have singles and 280 carry twins.

Shearing occurs in March with an average of 4kg per head of wool being cut.

Mr Sims said that while the Dohne wool was of great quality they don't cut as much wool as a Merino would, although they were working to increase the wool cut paying close attention to ASBVs during ram selection.

The meat market has been strong and Mr Sims said they had been receiving good prices for both their mutton and lambs.

On the wool side, the market has been more volatile throughout the past couple of years.

"We don't stake everything on the wool so it's not a huge concern," Rebecca said.

The Sims are methodical when it comes to managing feed rations and nutrient requirements.

Over the years they have adjusted their feed regime and trialled different mixes of grain, but have found that it can be a bit of a balancing act as each time they change the feed ratio, they have to recalculate the energy and nutrients needed per head.

"We are always learning and finding what works best for our operation," Mr Sims said.

To simplify the process they have settled on feeding a 90pc barley and 10pc lupin ration, which is mixed into the silos at harvest and is fed via lick feeders.

"It should all flow at the same rate and have the same amount of energy right through and it has worked really well I think," Mr Sims said.

The lick feeders also have a supplement dispenser, which is used to give the sheep calcium and sulphate.

To ensure they are providing their sheep with the right amounts of energy, nutrients and minerals, Nutrien Livestock nutritionist Bronwen Fowler has been providing her expertise.

"She has been a great help and Dennis Warnick, Warnick Livestock Services and Johnno Rippy, Nutrien York have been very helpful as well," Rebecca said.

Training the maiden ewes to use the lick feeders has been a challenge, so to encourage the ewes they are placed in a smaller paddock on barley stubbles.

"They were put in with the feeders in January, and we were aiming for up to 100g per head per day, to get them used to the feeders," Mr Sims said.

The rest of the flock are put onto the feeders in February, with the amount of feed they receive being adjusted as their pregnancy progresses.

Straw is also fed to the ewes as they have found, that despite the green pastures, the ewes still like to have some roughage.

"They don't need the good hay but they still like having that straw and the dry fibre also means they don't scour," Rebecca said.

A Vitamin E deficiency in the ewes has been an issue in the past, so to mitigate the Sims have started to pour Vitamin E onto their grain and trail feed them on the first of every month.

"We want to make sure the sheep are functioning at 100pc," she said.

As for paddock rotations, the aim is to have a cropping phase in each paddock for 8-10 years and then after that, they sow some pasture consisting of a clover base, with barley.

"We treat it like a grain and graze crop," Mr Simms said.

This means that during spring the barley has a chance to recover from being grazed and at the end of the year they can harvest the barley.

"Dad is pretty good at looking at the small amount of ground we have and coming up with ways to maximise our returns, while also being sustainable," Rebecca said.

The paddock then goes into a pasture phase for four to five years.

The cereal crops are also grazed for at least one to two weeks.

"He does a good job of monitoring the sheep when they are grazing the crops," Rebecca said.

By grazing the crops it allows the pastures to become well established so that there is plenty of green leaf matter during the colder months.

"It seems to fit really well into the program and we don't seem to lose any yield off the crops," Mr Sims said.

"We have been trying to develop an easy protocol and we want to be scientific about it all."

Due to a drier than usual season in 2020, the Sims sold off some of their older ewes.

"Last year was tight for feed and we were unsure of how this year was going to go," Rebecca said.

As for the crops in 2020 Mr Sims said they received just enough rain at the right times, receiving 210mm for the growing season which was below the area average of 350-380mm.

This year they have received a total of 195mm for the season so far with 113mm of that falling in May.

"It's a great set-up for the season," Mr Sims said.