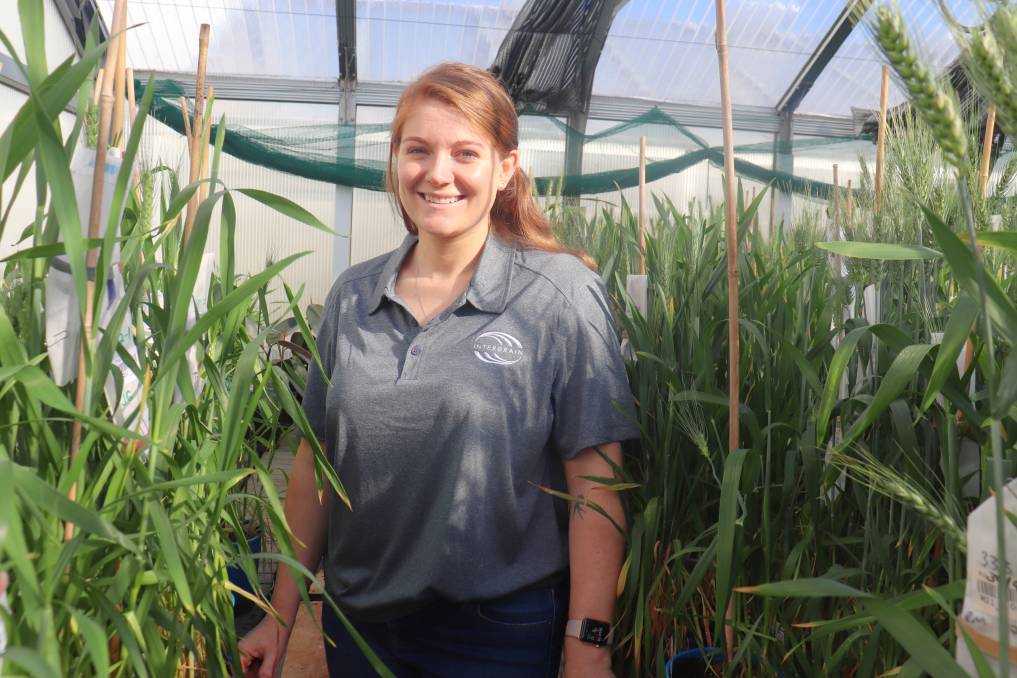 Go-getter has a fascination with agriculture

THEY say that there is a job in agriculture for everyone, no matter your background or where your skill set is, and Shannen Barrett is a perfect example of that.

These days Ms Barrett works at Australian cereal breeding company InterGrain as the communications manager, however her path to the role, and her career, was not straightforward.

Having been raised in Geraldton and with parents who came from and worked in the farming world, she grew up around agriculture but was never truly a part of it until later in life.

Ms Barrett went to Curtin University and originally started studying environmental biology before changing majors to geography, with the intention of becoming a high school science and geography teacher.

However after spending some time volunteering with high school students, she quickly realised teaching would not be the career for her.

"Growing up I always had a fascination with agriculture - my parent's family were always connected to farming in some way," Ms Barrett said.

"I guess it's always been in my blood and I've always had an interest in agriculture, food security and sustainability.

"While at uni I always found a way to weave food security into any assignment I did, so I always tried to have an ag focus and it was always in the back of my mind."

While she was studying at university, Ms Barrett worked casually for a couple of different agriculture research companies, including Eurofins and Living Farm.

She was able to get involved with the research and development side of the grains industry, mainly during seeding and harvest, but also with other elements such as spraying trials and assessments during the year.

It was while she was at Living Farm that a colleague raised a job opportunity with her that would set her on the path to her current position.

That job was as a junior policy officer with WAFarmers and was Ms Barrett's first full-time role within the agriculture industry.

"I had been thinking I wanted to go into some type of government or policy role and thought it would be a great place to start," she said.

"I was the junior policy officer for all of the executive officers, so I got a glimpse into grains, livestock, dairy and even bees and it gave me a great overview of the issues in the world of agriculture."

After about a year in the policy job an opportunity arose for Ms Barrett to take a side-step and move into a role as a media and communications officer.

She was in that role for nearly two years and in that time realised that agricultural marketing and communications was where her passion lies.

"I didn't have any experience in media or comms at the time, but I expressed that I felt I had a good feel of the company and the issues and they gave me a shot which I'm so grateful for," Ms Barrett said.

"I saw that if I took the media and communications role, I could put myself down a marketing pathway and I think my personality suits that."

After WAFarmers, Ms Barrett moved on to work as a communications officer for WeedSmart and the Australian Herbicide Resistance Initiative (AHRI), based at The University of Western Australia (UWA).

"I hadn't seen many communication roles within agriculture come up, so I knew I had to jump at the opportunity," she said.

"WeedSmart is a national weed extension platform and we had extension agronomists in each region, so I got to know a bit more about other ag areas around the country, rather than just WA.

"It was a lot of fun and taught me a lot of new ways of communicating that I hadn't experienced at WAFarmers."

After 18 months at AHRI and WeedSmart, Ms Barrett was approached with a different opportunity and while she wasn't ready to leave UWA, the potential was just too great to pass up.

Late last year, she started with InterGrain as a territory manager for the northern Wheatbelt of WA, a role which saw her responsible for marketing of the InterGrain brand, products and execution of wheat, barley and oat market development activities.

"It seemed like an interesting opportunity to gain experience in a different marketing space," Ms Barrett said.

"I'd always done online communications, but I'd never done face-to-face marketing, so I thought it was a good chance to broaden my skills."

Sometimes things just work out exactly the way they were supposed to and after just four months in the territory manager role, a reshuffle of the marketing department saw a new position of marketing manager become available.

InterGrain is a company firmly focused on promoting from within, so the role was offered to Ms Barrett and she grabbed it with both hands.

"I didn't feel like I was ready to move on from territory manager as I hadn't had the chance to sink my teeth in yet, but it was such a great opportunity within such a great company, so I couldn't say no," she said.

"It provided me with the chance to be involved in the marketing and communications strategy from beginning to end, and in terms of my career progression it was the right choice.

"It's very fast-paced and very challenging, but in a great way and I don't think I'm going to grow out of this role any time soon, if anything, I think the role will grow with me."

With her dream job secured in a company that is forward-thinking, young and agile, Ms Barrett is more acutely aware than ever that there are a lot of misconceptions surrounding agriculture and farming.

She has found the people in the industry very welcoming and wants people to know you don't have to come from a farm to work within agriculture.

Ms Barrett said people didn't understand the sheer amount of jobs at every single point in the supply chain that were available.

"It's so important to get the message out there, particularly to kids in high school, that no matter what you do at university, or if you don't go to uni at all, there's a job in ag for you," she said.

"For those people that do like English and writing, it can still be applied in agriculture and there are so many marketing and communications roles for every single company, especially with the rise in importance of social media."

"Within InterGrain alone we have roles in chemistry, breeding, finance, statistics, marketing and field operations, just to name a few, so ag is one of the most exciting industries to be a part of because it's so varied and you come across all sorts of interesting people."

In the space of five years, Ms Barrett has evolved from a communications officer with no marketing experience or background to the communications manager of a national cereal breeding company.

It's something that she is incredibly proud of, but also something she admits would not have been possible without building a supportive network.

"A big part of agriculture is who you know, it's all about getting your foot in the door and my advice is to get involved - we have so many conferences, workshops and events which are a great way to meet people and get a foot in the door," Ms Barrett said.

"For young people just starting out in agriculture, getting involved in a group like AgConnectWA is a great way to make networks and I can honestly say I would have not been so successful in my last three roles without the connections I made through that group."

Imparting her wisdom on to the next generation is something Ms Barrett has also become incredibly passionate about.

"It's a cohort of young people in agriculture who attend school career expos to talk to students about the career opportunities in agriculture," Ms Barrett said.

"I'm excited to get out there and put a face to the industry that is a bit cooler and fresher than the old rhetoric of an old man sitting in a tractor with a piece of straw hanging out his mouth."