Several reports have been made to DPIRD's PestFax service of Russian wheat aphids in crops in the Esperance district, as well as Mount Madden, Lake King, Mt Barker through to Borden and Williams. 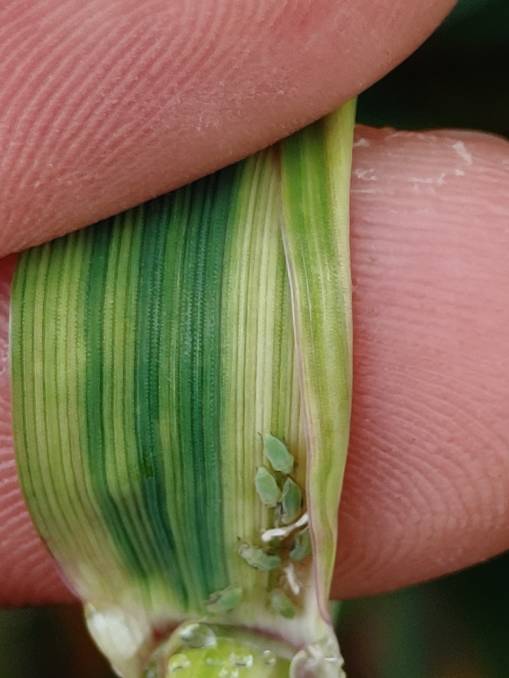 Graingrowers have been warned to monitor crops for Russian wheat aphids, with reports the emerging pest has moved west from the south east coast.

WESTERN Australian graingrowers have been urged to start monitoring crops for an emerging pest, Russian wheat aphid, which is already active this season.

Several reports have been made to the Department of Primary Industries and Regional Development's (DPIRD) PestFax service of Russian wheat aphids in crops in the Esperance district, as well as Mount Madden, Lake King, Mt Barker through to Borden and Williams.

DPIRD research scientist Svetlana Micic said the department was undertaking surveillance for the pest throughout the grainbelt to monitor its spread and assist growers' preparations to protect crops.

"In most cases, aphids have been found around crop edges in fairly low numbers below action thresholds," Ms Micic said.

"We've learnt in the past few years that this pest survives on a wide range of grasses and has a preference for barley grass.

"Crop monitoring by landholders and surveillance by the department will help us to determine the extent of spread of the pest in WA and what actions are required."

A research investment by the Grains Research and Development Corporation (GRDC) in the Eastern States has found maximum aphid densities are expected to occur between booting and ear emergence and that populations can double every 35 days until ear emergence.

Russian wheat aphid has become established in grain growing regions across Australia, after it was detected in South Australia in 2016.

Ms Micic said department officers had been working with stakeholders and the broader research community across Australia to better understand how Russian wheat aphid performed in local environments.

"We now know that crop seedlings with heavy infestations can have their growth stunted with tillers lying almost parallel to the ground," she said.

"Later infestations of this pest can have a larger impact on yields as they can cause the flag leaf to curl, which can trap the awn and prevent the head from completely emerging and results in grain that does not mature properly."

Russian wheat aphid is manageable and a range of treatment options and an action threshold calculator are available on the DPIRD and GRDC websites.

"The action threshold for this pest depends on the cost of control, the cereal market price, the yield potential and estimated time until ear emergence," Ms Micic said.

"Consider surveying the paddock in more than one section and counting at least 100 tillers in each section.

"For most areas in WA, where crops have a yield potential of three tonnes per hectare or more and there are more than 40 days until ear emergence, control is beneficial if Russian wheat aphids are found on four per cent of tillers over the paddock."

Growers are encouraged to survey crops - particularly from stem elongation - and to report any sightings of Russian wheat aphid to the PestFax service, via the app or online.

"Russian wheat aphids are easily distinguished from other cereal aphids by its pale green colour and its lack of excretion tubes, or exhaust pipes, on its rear," Ms Micic said.

Landholders can report suspect observations of the pest, including photographs, to the PestFax Reporter app.

Stay up to date with pest activity during the growing season with the PestFax newsletter, found at agric.wa.gov.au/newsletters/pestfax.