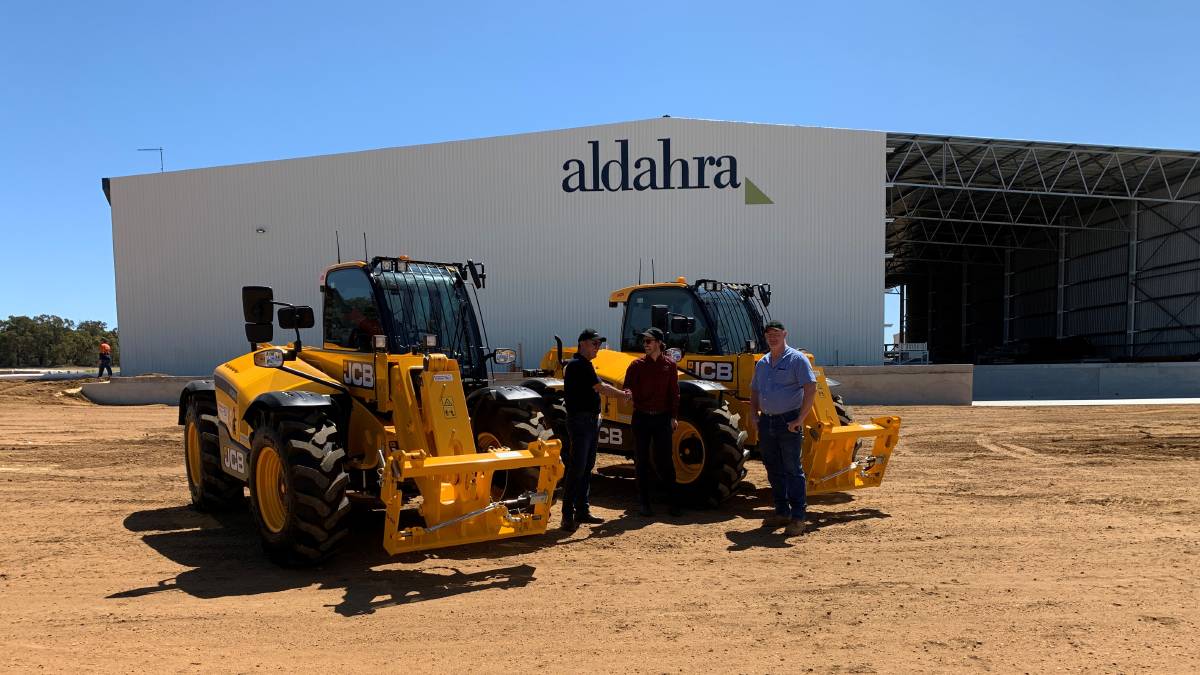 WITH more than 20 years' experience in driving forklifts and telehandlers, Aldahra production manager Tony Thompson said the JCB 532-70 Agri Farm Special Telehandler was the ideal machine to do the job required.

Mr Thompson said the telehandlers "don't get much of a rest when they are in full production mode" and made the job easy.

The two 3 Series, three tonne telehandlers were purchased after Aldahra found the earlier 2 Series JCB's handled the demanding job without any issues.

Mr Thompson said the upgrade ensured that operators were in a "comfortable" working environment which had an "integrated joystick" and improved cab layout.

"The new series is not as noisy as the previous model and they have a more open view in the front," Mr Thompson said.

"The view means we can go to the near maximum reach of the machines and still have clear visibility."

The telehandlers were used to unload trucks as they arrived, stack the bales, transfer bales between sheds and load the industrial hay press.

When things get busy they can be in operation non-stop for most of the day.

Boekeman Machinery sales consultant Ben Boekeman handed over the two new telehandlers prior to the busy hay season, which started in October 2020.

He said they were the third and fourth telehandlers Aldahra had purchased off the Wongan Hills branch of the family business.

"We have been dealing with Aldahra for more than four years," Mr Boekeman said. Boekeman Machinery sales consultant Ben Boekeman (left), with Aldahra production manager Tony Thompson inside the 104-metre long warehouse which houses the new industrial hay press. The new JCB 532-70 Agro Farm Special Telehandler is in the background where it is used to load oaten hay and straw onto the hay press.

Boekemans do a minor service to the three JCB telehandlers every 250 hours and a major service every 500 hours, which "works in everyone's favour, as it reduces Aldahra's downtime and increases their trade-in value given the machines are so well serviced".

Mr Thompson said 99 per cent of its oaten hay and straw was supplied by contract farmers, while the company seeded 70 hectares around the Wannamal site to make use of its land.

Mr Thompson said the business was well supplied with hay to meet its exports for 2021.

Just like everyone else Aldahra had struggled during COVID-19 to source available ships to load containers to send hay to its two major markets in South Korea and Japan, but that didn't mean they stopped working.

The industrial hay press, which was made by Schutz Industries and Torque Industries in South Australia, was designed like a field baler but on a much larger scale.

The hay press is operated by two staff 24 hours a day and runs on a diesel powered generator, which is complemented by a solar farm on the roof of the warehouse.

The two systems were integrated to maximise power use and efficiency.

Mr Thompson said Aldahra had a very environmentally friendly approach to its business.

The plant is able to fill five to six 40 foot containers in a 12-hour shift.

The containers are filled with forty-four 600 kilogram packs, to a total of 26t.

While packaged in 600kg lots the packs have been cut into 25kg squares for ease of unloading and distribution upon arrival in South Korea, Japan, Taiwan and the Middle East.