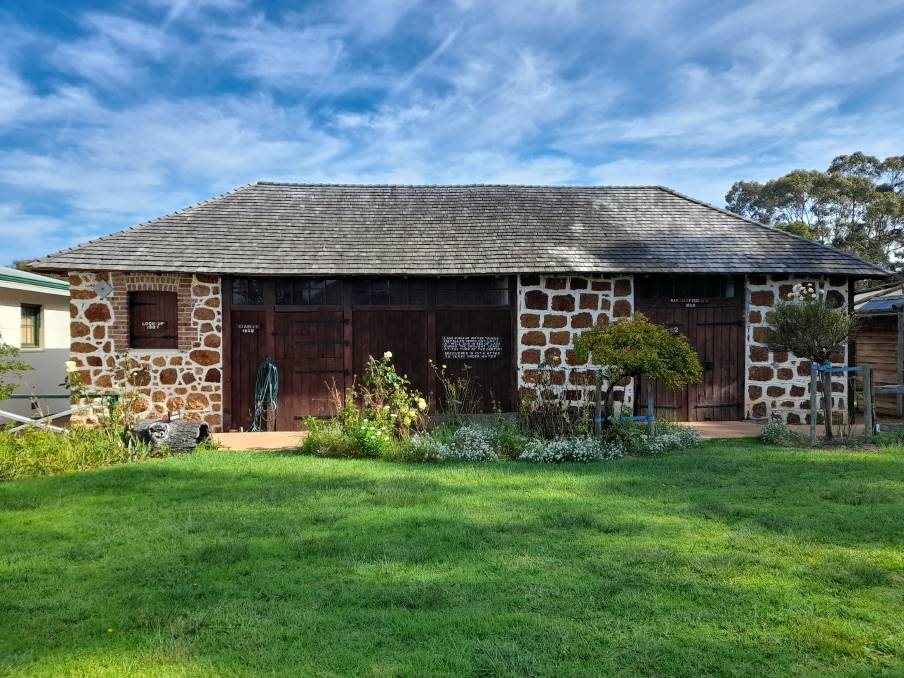 The stables and prison at the Mt Barker Police Station & Folk Museum. The inside has been white washed on the walls and is open to the thatched roof. The prison, located on the left of the building, only has the one window and was fitted out with a steel framed single bed, mattress, bucket (for a toilet) and a ball and chain attached to a mannequin prisoner. It would have been cold in the winter and hot in the summer - and it would have smelled foul next to the horses. The Plantagenet Historical Society has collected an assortment of leather saddles and bridles and working tools which are on display in the stables.

The Mt Barker Police Station and Folk Museum contains a wealth of historical memorabilia, artifacts, photographs, clothing and uniforms as well as donated agricultural and horticultural machinery and equipment dating back from the 1830s.

WHEN driving along Albany Highway through Mt Barker it would be easy to think that the Police Station & Folk Museum was just a small two building affair with little to offer - but that would be wrong.

There's more to see here than what you'd think and the way the displays have been presented is sure to provide the 'wow' factor for anyone interested in visiting.

At least I found myself saying that as I went from one building to the next - probably because it exceeded my expectations.

Last month, on behalf of Farm Weekly, I got a special private tour of the facilities by Plantagenet Historical Society museum curator Pennie House and promotions and catering head Elizabeth Otto.

A few impromptu tourist tagalongs joined in part way along the tour to provide a few laughs and additional discussions.

I discovered the Mt Barker Police Station and Folk Museum contains a wealth of historical memorabilia, artifacts, photographs, clothing and uniforms as well as donated agricultural and horticultural machinery and equipment dating back from the 1830s. 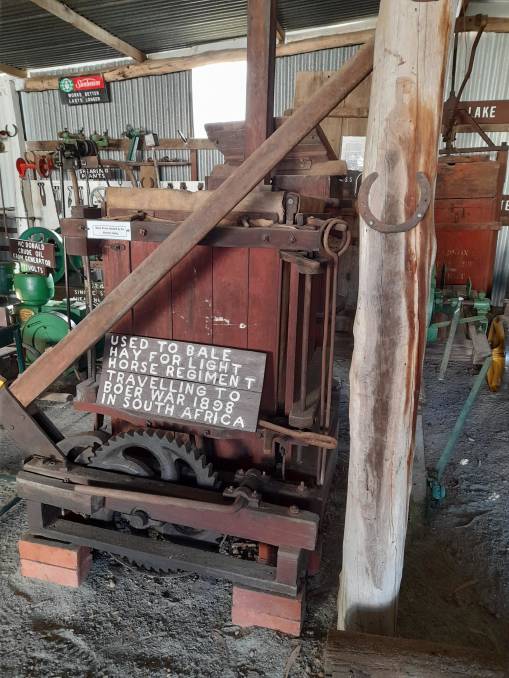 A well presented hay baler used by the Light Horse Regiment travelling to the Boer War in 1898, on display as part of the agricultural machinery selection in the workshop of the Mt Barker Police Station & Folk Museum.

The history of the police station is interesting in itself, having been built by convicts in 1868, the Plantagenet Historical Society celebrated its 150th year in 2018.

The earliest photograph of the Police Station was taken in 1902 and shows the officer-in-charge, Police Constable West on his horse, with an Indigenous tracker also on horseback with an additional packhorse in tow behind, as well as the constable's family under the verandah.

The police officers stationed at Mt Barker serviced a large region to Bremer Bay and back on horseback, where they checked in on local farmers along the way - which could take them months to traverse.

By the late 1950s the building and grounds had been left abandoned but by 1968 the Plantagenet Historical Society members started the restoration work, and there's a photographic display on the restoration process.

There's 12 buildings in total, including a second police station and court room, mason's cottage, the stables and prison, machinery sheds, the pioneer building and the old Bristol school room - on six acres.

Mason's cottage, which has walls of timber, dates back to 1870 and was built on a farm at Martagallup. 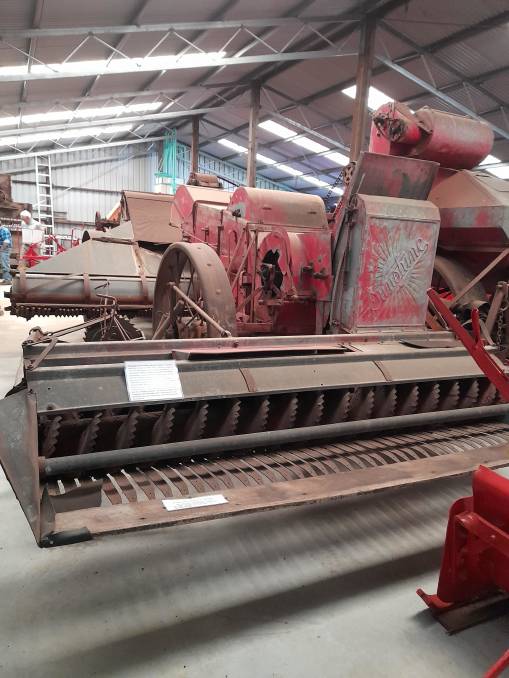 A Sunshine harvester in fairly good condition on display among the agricultural machinery at the Mt Barker Police Station & Folk Museum.

It was transported to the site and is on display just as it was originally with interior sackcloth ceilings and walls with a white wash finish.

The floor was made from crushed termite mounds and there was a hole in the roof for the smoke to disperse when cooking on the open fire in the living room.

The only part of the original home that wasn't included was the brick fireplace - which remains on the farm.

The pioneer building is home to a large heavy wooden wheelchair used by Mrs Fanny Mason.

The gardens were also a delightful treat and there were old machinery implements on display around the grounds - all having been sanded back and repainted green and black, red or yellow, by local people on the work for the dole scheme - something that the Historical Society said had been extremely helpful due to dwindling volunteer numbers in recent years.

One of the historical wagons on display in a shed at the Mt Barker Police Station & Folk Museum.

COVID-19 had impacted the workers being on site for the past 12 months or more and Ms House said she hoped to have the work for the dole scheme start up again to help keep on top of the workload.

The museum's opening hours had also been affected by COVID-19 but volunteers were making themselves available again on Saturdays and Sundays from 10am-2pm, and whenever people wanted to book in during the week (if someone was available to host a tour).

Because of the wealth of historical documents on hand at the museum, and due to a number of fires at various other museums around the country in recent years, the Historical Society was prompted to install a new fireproof archives repository to preserve the history in a more secure way.

The repository was officially opened on April 28 with about 30 attendees celebrating the event.

While it is fireproof, it is also insect proof and closed to the public.

Only the Plantagenet Historical Society archivist Camille Inifer, wearing white gloves and protective footwear, can enter the repository - which contains a storage compactus and map cabinets full of shire history dating back 200 years.

The funds for the building of the repository were donated by the Mount Barker Co-operative, the Plantagenet Community Financial Services (Bendigo Bank), Federal Member for O'Connor Rick Wilson and the Shire of Plantagenet.

There were enough funds to also purchase the storage compactus, upgrade the computer system, install air conditioning and a couple of research desks.

The Historical Society is undergoing a transfer of documentation from the old storage cabinets to the new repository which could take months - ensuring that each document is inspected for damage and insect infestation prior to being stored.

Over the years the society has salvaged some valuable historical items that would have been taken to the tip if not claimed.

The site is also used for special occasions and has a workable blacksmith fireplace in one of the display sheds.

For machinery enthusiasts there's plenty to see from a range of Bedford trucks and an old fire engine to farm equipment and machinery, all of which is in working condition.

The state of the museum is a real credit to the volunteers who have dedicated so much of their own time to keeping the history of Mt Barker alive. 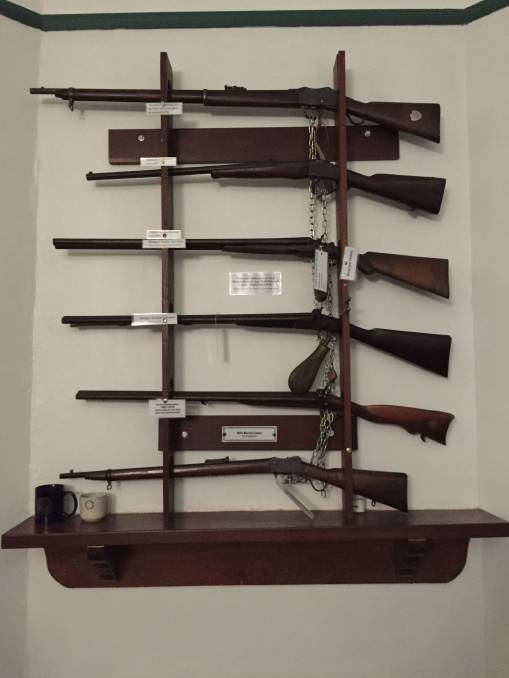 Some of the rifles used by police constables in the Mt Barker region on display at the Mt Barker Police Station & Folk Museum's Court House. All the rifles had been rendered safe and unusable for display by a local volunteer.