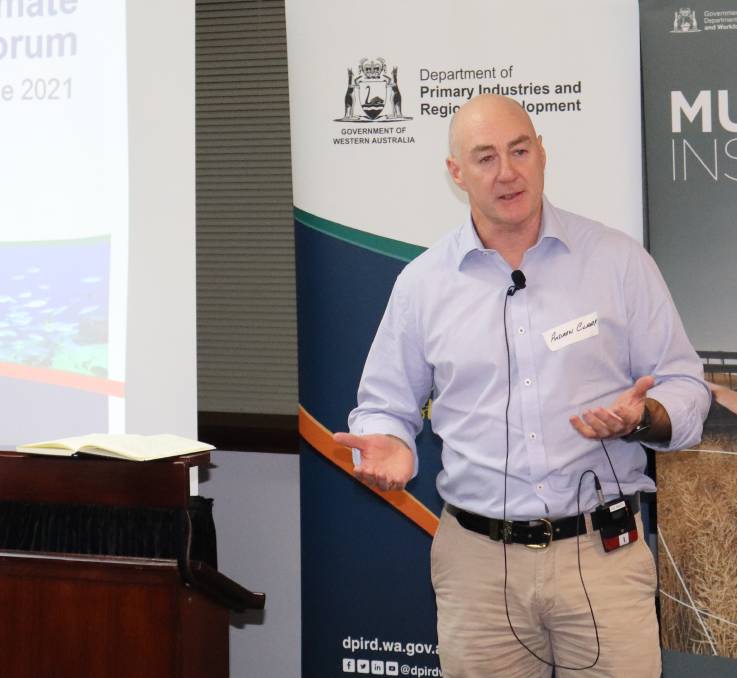 That was the sentiment issued by several key industry stakeholders at the State government's $15 million Climate Resilience Fund Forum, held earlier in the month at the Muresk Institute in Northam.

"All you need to do is pick up one of the big bank's annual reports," Mr Clark said.

"We see it as a real risk because we have a lot of money invested in this industry, so we need to be practical in managing that risk."

Mr Clark said the banking sector had been very open about wanting to finance into a low carbon environment and climate resilient economy, with most major banks aligning themselves with the Paris Agreement (a legally binding international treaty on climate change).

While there has been much controversy around the term "regenerative agriculture" within the industry, Ms Loo said the world's big food companies had identified it as one of several pathways to achieve a carbon reduction outcome.

Highlighting General Mills, Pepsico and Nestlé's recent moves to support farmers that incorporate regenerative agricultural practices into their operations, Ms Loo said the challenge for Western Australian growers was to make sure they didn't get left behind.

Since making that commitment in 2019, the company has supported three regenerative agriculture pilot trials in the United States involving oat, wheat and dairy farmers.

Combined, the entire project covers about 300,000 hectares of land.

Over the three year pilot trial period, General Mills will hold workshops and provide individual mentoring to each of the farmers involved.

Ms Loo said on the consumer end, the products which used the key ingredients from the pilot trial received the Savoury Institute's Land to Market Ecological Outcome Verification Seal which represents agricultural practices that include "soil health, biodiversity and ecosystem function".

With the biggest food company in the world, Swiss giant Nestle also committed to net zero carbon by 2050, the company released a detailed road map in February this year which includes measurable and time bound key performance indicators.

"Nestle's sales last year was $US76 billion ($101b), they buy one per cent of the world's agricultural output and their greenhouse gas output is twice the size of Switzerland," Ms Loo said.

In April 2021, Pepsico also announced it aims to spread the adoption of regenerative farming practices across seven million acres globally by 2030 to create an estimated three million tonne reduction of greenhouse gases as well as sustainably source 100pc of its key ingredients.