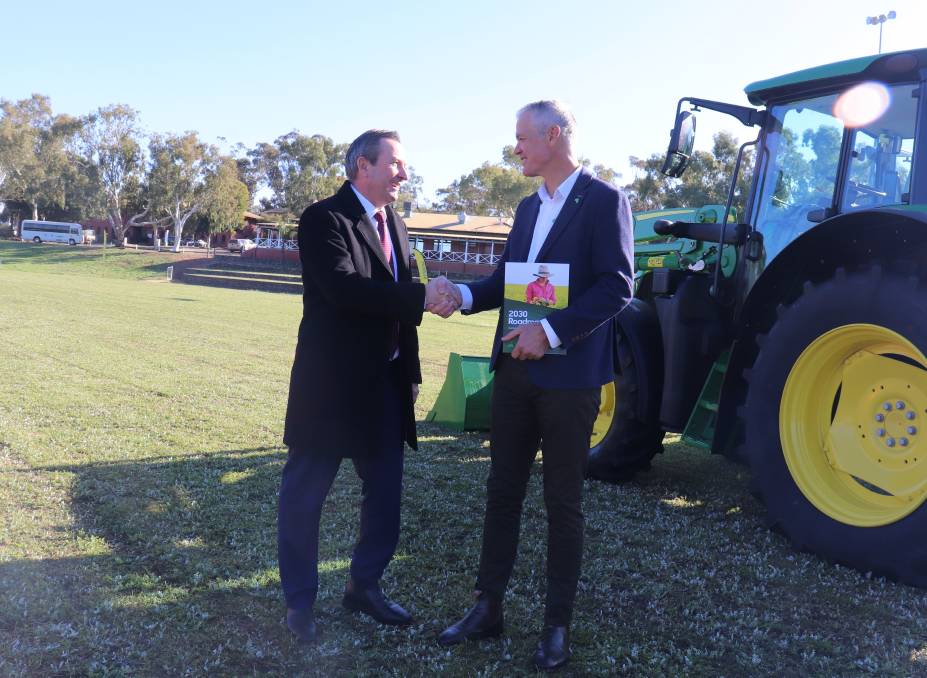 Western Australian Premier Mark McGowan officially opened the forum, which ran over two days and was attended by about 170 industry stakeholders.

THE WAFarmers and National Farmers' Federations' (NFF) Towards 2030 Forum, held at the Muresk Institute in Northam last week, combined national and State perspectives on the challenges and opportunities being faced by the agricultural industry.

Western Australian Premier Mark McGowan officially opened the forum, which ran over two days and was attended by about 170 industry stakeholders.

With the agricultural sector providing the State with about $12 billion each year, Mr McGowan and other keynote speakers including Food and Agriculture Minister Alannah MacTiernan and NFF chief executive Tony Mahar highlighted issues facing the industry, including freight, diversifying markets, research and development, climate change, carbon farming and biosecurity.

As figures show WA has continued to produce more grain despite a drop in rainfall over the past 30 years, Mr McGowan said and he welcomed the NFF's support for the State government's target for net zero emissions by 2050.

"There is common ground in reaching that target between us - and the WA climate policy is dedicated to ensuring that we do reach that target," Mr McGowan said.

With $15m already dedicated to the Carbon Farming and Land Restoration Fund, Mr McGowan said carbon farming will be a huge opportunity for Australia going forward.

As part of the project, there are now 71 Southern Rangelands carbon farming projects in operation covering more than 12 million hectares of pastoral leased land.

These projects hold contracts with the Federal government to deliver more than 12 million tonnes of abatement, estimated to be valued at about $180m.

"This has been a game changer for the Southern Rangelands pastoralists, providing an alternate income stream to reinvest in the management of their land," Mr McGowan said.

"The land restoration fund will help build on that work, supporting that uptake of new carbon methodologies in our agricultural regions."

Largely an export State, with 80 per cent of the food WA produces exported, Ms MacTiernan said WA's agricultural markets were changing with the sector's customers increasingly demanding more by way of understanding the provenance, sustainability and carbon footprint of their products.

Recognising that CBH now differentiates about 20pc of its grain to receive market access premiums and highlighting a deal that has been struck with Heineken, Mexico, for the State's malt barley, which has to go through international sustainability and carbon certification processes, Ms MacTiernan said occurrences such as these would accelerate over the next 5-10 years.

"The European Union is now placing a carbon price on imports of carbon intensive goods through the Carbon Border Adjustment Mechanism, so whilst that doesn't apply to agricultural produce immediately, we can all see the direction the world is going in," Ms MacTiernan said.

She said accumulating carbon, whether by tree growing or enhancing soil carbon, would give the State's farmers flexibility.

"You will have a choice - do I use that so I can promote my wheat or my sheep as being carbon neutral or do I sell that into the carbon market and have that as a commodity that I've farmed?" Ms MacTiernan said.

She said the State government would be introducing a new scheme in the next two weeks which rewards the State's carbon farmers and incorporates two rounds.

"The first round will have a couple of components for farmers - one is you can pitch for additional upfront payment for projects such as tree planting or developing soil carbon and that will leverage off the current ERF framework and we will purchase those credits upfront to help people establish themselves as carbon farmers," Ms MacTiernan said.

"The second part of the scheme is going into low rainfall areas, defined as 350 millimetres or less and quarantining this for soil carbon projects.

"At the end of five years you will have the option to opt out, but as long as you have acted in accordance with the commitment that has attracted the funds there won't be a liability for you if you decide you don't want to proceed with selling those soil carbon credits."

Mr Mahar said that the opportunity for the agricultural industry going forward was in environmental services, natural capital, biodiversity and recognising, rewarding and remunerating farmers for the job they do in terms of managing the landscape.

"Monitoring and measuring how they look after the country and rewarding farmers for that job - that is a public good that the community values and farmers value, but farmers aren't being rewarded well enough for it at the moment," Mr Mahar said.

"We think we can get an extra $5b being paid to farmers, farm businesses, rural and regional communities for looking after the land and making sure we improve and maintain the agricultural landscape."

Speaking about NFF's vision for agriculture to become a $100b industry by 2030, Mr Mahar said even if agriculture continued to do business as usual there would be a $15b shortfall.

With Australia's agricultural industry sitting at $66b currently, Mr Mahar said foreign investment in Australian agriculture was welcomed by the NFF, as long as the investments were monitored and "have the right impact".

"According to AgriFutures there is an $8b shortfall of investment on capital into the industry - so I don't think we should shut the door to foreign investment that is going to help us become better," Mr Mahar said.

From a national perspective he said biosecurity was a great strength of the agricultural sector, but that more work needed to be done with the States, Commonwealth and local governments to ensure a strong, robust, biosecurity system that will continue to protect Australia's agricultural industry into the future.

"Our products are highly regarded, highly valued and highly demanded but that relies on us being pest and disease free and I would say that our biosecurity system at the moment is not as good as it needs to be," Mr Mahar said.

"I think we've dodged bullets in terms of khapra beetle and others and we need to do better as an industry and as a government in terms of managing biosecurity, as that is a shared responsibility."