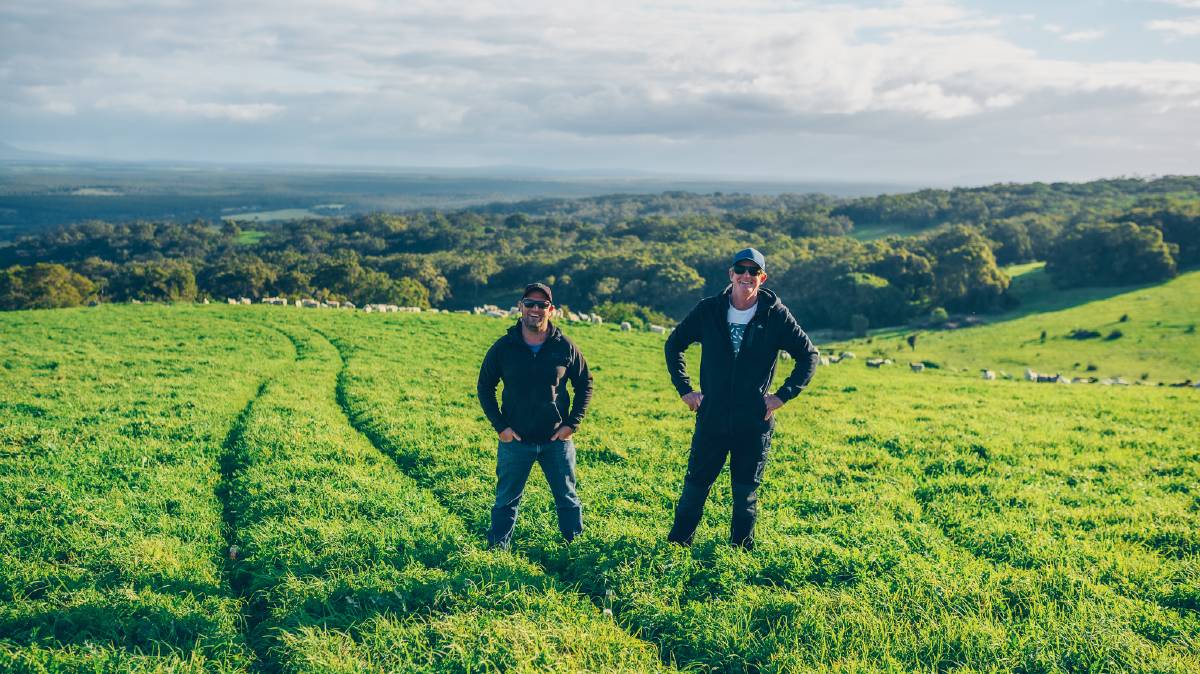 "Farming has been my passion for my whole life."

Together Mr Bowey and Mr Baldwin alongside their families run an UltraWhite prime lamb operation.

Just 18 months ago the pair secured a property consisting of 600 hectares on which they began building up their sheep numbers.

They have also recently acquired a further 650ha of neighbouring land for a combined total of 1250ha on which they run a total of 4000 predominantly UltraWhite breeding ewes.

On a daily basis, Mr Baldwin runs the farm with a worker.

"Various people within the industry and in particular Westcoast Wool & Livestock have been a great help in developing our business," Mr Baldwin said.

Being in the agricultural industry is not new to Mr Bowey as he grew on a farm before going on to form his own consultancy business,

This allowed him to work with various farmers across the country and gain plenty of experience.

In 2013 after living in the Eastern States for a period of time Mr Bowey decided it was time to return to WA.

It was then that he decided he wanted to farm in his own right.

"Farming has been my passion for my whole life," he said.

The pair have put together a paddock to plate production system that is focused on producing grassfed Green Range lamb, which is sold to and marketed by Dirty Clean Food.

Currently, 100 lambs are sold a week and weigh on average 22-24 kilograms dressed.

"We hope to more than double our numbers in the next 12 months," Mr Bowey said.

When running their sheep program they have taken a different approach and are utilising a dairy style model.

The sheep are 100 per cent grassfed and they're program includes using rotational grazing, improved feed systems and nutritional systems to create peak animal performance and turnover on grass at any given time.

"We try to grow as much grass as we possibly can and then convert as much feed as we can in a 12 month period," Mr Bowey said.

Another benefit of the rotational grazing system is that there is enough feed until the ewes lamb down and placed in their gestations so the lambs don't have to be moved when they are young/small.

As well as pastures and straw, they are also supplemented minerals and fed EasyGrass pellets from Milne Feeds.

"We try to make sure that they are getting everything they need so that they are growing and as happy as they can be at any given day of the year despite seasonal variations," Mr Bowey said.

Mr Bowey said he worked with dairy farmers gaining more than 10 years of experience and he believes certain aspects can be transferred to sheep production.

Mr Bowey's family's farm runs UltraWhites and said that he likes that they can gain weight quickly and are high yielding.

Running UltraWhites also means that they don't need to be shorn and can carry their condition throughout the entirety of their pregnancy.

"With our business model they fit in quite well and one of the things I really like about them is that we can turn them off quite quickly," Mr Bowey said.

To maximise its production, the operation is continuously lambing throughout the year with the ewes lambing twice every 13-14 months.

"There is not a month of the year that we are not lambing," he said.

The ewes are scanned mid-pregnancy from their rotational grazing mob to keep track of when they will be lambing.

To maintain capacity they also trade store lambs during the year.

When sourcing their rams the pair use Hillcroft Farms sires and select for growth rate and eye muscle, with feed conversion being a key trait.

"Dawson Bradford (Hillcroft Farms) is breeding the kind of genetics that we want for our lambs," Mr Bowey said.

As for the market, selling lambs on a weekly basis means they are receiving consistent cash flow.

The seasonal conditions when they first started were challenging, with some of the more inland areas receiving more rainfall than Green Range at the start of last year.

This year has been the total opposite.

The property has incredible water resources so never comes close to running out of water which helps when others would have to destock.

"If we can grow more feed then we can increase our intensity," Mr Bowey said.