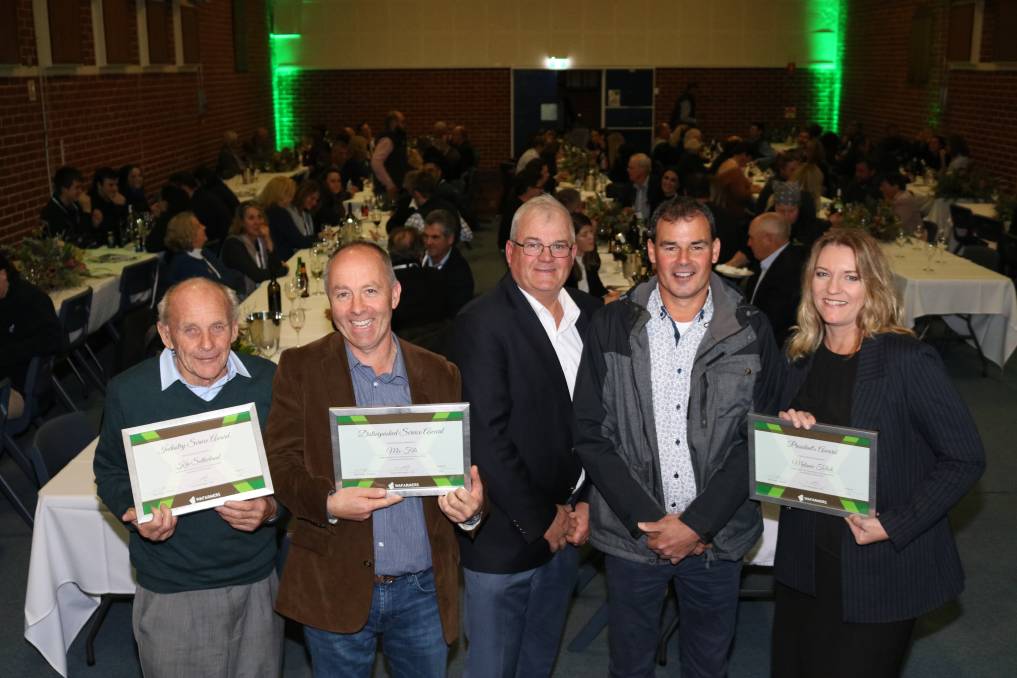 The prestigious awards are usually made at WAFarmers' annual general meeting dinner in March, but given this year's event was cancelled due to COVID-19 restrictions the Muresk forum, where more than 170 delegates were in attendance each day, was seen as a fitting substitute.

The prestigious awards are usually made at WAFarmers' annual general meeting dinner in March, but given this year's event was cancelled due to COVID-19 restrictions the Muresk forum, where more than 170 delegates were in attendance each day, was seen as a fitting substitute.

A genuine industry stalwart, Mr Sutherland now runs the family trucking business, started by his parents in 1923, with his sons Brian and Kyle Sutherland from their base in Katanning.

"Over the last 68 years since he joined his father in the company, Ken has proved to be a vital contributor to the region, taking on any task no matter how big or small, from loading wool and fertiliser by hand to driving through the night to deliver pellets to a livestock vessel," WAFarmers president John Hassell said as he made the announcement.

"As the company heads towards its 100 year celebrations in 2023, Ken has been instrumental in its success, helping to grow the business from one truck in the 1920s to nearly 100 trucks today.

"With his trademark green stubbie shorts, cut sleeve work shirt and beret, one thing that has never changed along that long and often tough journey, has been Ken's unforgettable smile, his infectious positive attitude and his desire to help who ever might ask for it, never seeking anything in return."

Neridup farmer and WAFarmers grains section president Micl Fels was acknowledged for his service to the grains industry with the award also presented by Mr Hassell.

"Mic first started as a proxy for Grains Council in 2006 and progressed to Zone delegate in 2008 and has held that position ever since," he said.

"He was voted in as chair of Grains Council in 2020 and what a year to take on that role, with barley disputes, COVID-19 and agricultural worker shortages but Mic has been front and centre with working for and on behalf of grain growers."

"Through his Esperance-Ravensthorpe Zone and along with Marg Agnew and Tywen Cole, he worked tirelessly to distribute $250,000 in donations to farmers and fire brigades after the disastrous Cascade-Scaddan fire in November 2015."

"And Mic is also pretty handy with developing apps to assist fellow farmers with recording information with iPaddock, and his degree in engineering has led to his design and manufacture of the Alpha disc seeding units," Mr Hassell said.

In presenting the president's award, immediate past president Rhys Turton said he had agonised over the decision but could not go past Ms Tolich, an outstanding advocate for the agricultural industry in general and so instrumental to the WAFarmers organisation who continued to show such incredible passion, resilience and professionalism throughout her 12 years with the organisation.

"She was integral to the formulation of our new strategic plan helping to bullet proof WAFarmers and ensure financial resilience in the modern day agricultural world," Mr Turton said.

"Whether through speech writing, organisational skills, filling in for me or bearing the brunt of many discussions between members she was a massive support to me during my term as president.

"It was nothing to get a text from Mel at 5.30 in the morning, often on a Sunday, with some crucial development and I truly thank her for always going above and beyond," he said.