From the outset, FMC noted there was likely to be some level of crop bleaching with the Group Q product, which was released to much hype as a new mode-of-action to combat ryegrass, but farmers and agronomists are worried the affects have been more severe than they anticipated. A comparison between a paddock sprayed with Overwatch/trifluralin on the right and trifluralin/prosulfocarb on left. Photo by Craig Hall, Gairdner.

AGRONOMISTS around Western Australia are claiming that FMC's new herbicide Overwatch is made volatile by moisture, which is what they allege has been causing excessive levels of bleaching in crops treated with the product and off-target damage in nearby paddocks.

From the outset, FMC noted there was likely to be some level of crop bleaching with the Group Q product, which was released to much hype as a new mode-of-action to combat ryegrass, but farmers and agronomists are worried the affects have been more severe than they anticipated.

Agronomic Acumen agronomist Wayne Smith, based in Albany, said he had seen that Overwatch could sit in dry soil for a month or two and nothing happened, but when it rained, that change.

"As soon as it rains, the product starts rising through the soil, moving in all different directions and causing bleaching to off-target plants," Mr Smith said.

"If you spray a crop and see no effect for two months, then it rains and all of a sudden you start getting damage, you can't attribute that to spray drift, spraying from inversion, or mixing chemicals with it, as FMC has claimed."

FMC head of development Geoff Robertson said volatilisation referred to the movement of herbicide vapours through the air following a herbicide application.

"The potential volatilisation of bixlozone, the active ingredient, applied to soil has been tested by FMC under both field conditions and controlled conditions in a wind tunnel and these investigations demonstrated that the amount of volatilisation was very low," Mr Robertson said.

"Bixlozone is expected to degrade rapidly in air, with a half-life of about six hours and this data indicates that volatility is unlikely to be a significant source of off-target movement of bixlozone.

"Based on available information and data, any off-target movement of Overwatch, which may be incorrectly perceived as volatility, is most likely related to spray drift which is supported by the many other instances where Overwatch has been applied alongside sensitive crops with no off-target bleaching recorded."

According to Mr Smith, it appears the vapour from the product is coming up through the soil, which could happen on the same day, a week later, or even a month later.

"I have a client on Kangaroo Island, South Australia, who sprayed dry in mid-March and then got a phone call in mid-May, after rain, telling him that he had damaged plants all down the highway," Mr Smith said.

"He hadn't sprayed for two months and is the only cropping guy around, so he sprayed dry, seeded and covered it up with soil, then it rained two months later and the damage began.

"That's all the evidence you need that it simply can't be spray drift - Overwatch is volatile and is moving later on when it's wet."

Mr Smith said there was no other product he had ever seen in farming that acted the way Overwatch appeared to.

"With it only happening with moisture, to me that indicates that there has been a chemical reaction and that is what is releasing, rather than the chemical itself," he said.

"This is the worst product we've ever seen for vapourising and we're seeing vapourising still happening six weeks from when the rain or wet soil activated the product."

Independent agronomist Frank Boetel, based in Katanning, said the worst bleaching was in paddocks that had been directly sprayed, with barley more susceptible than wheat and canola.

"Wheat is more tolerant to it, which is what we had already seen in trials, but as soon as it gets wet, that's when it really takes off and we're seeing substantial damage in barley crops that have been sprayed.

"The others hardest hit seem to be oats, lupins and serradella which are all more vulnerable to the off-target drift." 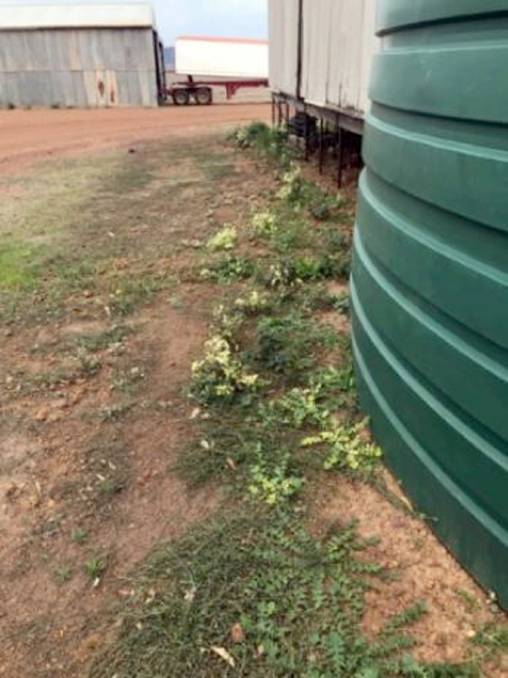 This Overwatch bleaching came from a paddock sprayed about 400 metres away, and was not seen for a few weeks after spraying until it rained, and then it was seen about a week after that. Photo by Wayne Smith.

Both Mr Smith and Mr Boetel, along with hundreds of agronomists and farmers around the country, have made reports on the damage caused by Overwatch both to FMC and to the Australian Pesticides and Veterinary Medicines Authority (APVMA).

According to FMC, the number of reports of off-target crop bleaching remains relatively low considering the area treated with Overwatch this year.

FMC has now received between 65 and 70 reported cases in WA and a total of nine reports in the Eastern States.

"Many of the earlier sown crops have already recovered from in-crop transient bleaching," Mr Robertson said.

"There are still a few areas where FMC are yet to observe crop recovery from transient bleaching, especially in areas where it has been excessively wet or when a combination of factors have led to elevated in-crop crop bleaching.

"Those areas continue to be monitored but, importantly, it is still some weeks before FMC would expect that the transient bleaching effects would have entirely resolved in all crops."

An APVMA spokeswoman said they were aware of reports of crop damage in WA and Victoria and they were working with FMC to understand the nature of these incidents.

"The APVMA is working with the registrant to determine the nature and number of adverse experiences related to the use of Overwatch Herbicide and will assess any adverse experience reports it receives in relation to this matter," the spokeswoman said.

"The product label describes how Overwatch herbicide should be used, including how and under what conditions it should be applied and specifies mandatory downwind buffer zones to minimise the risks associated with spray drift.

"That's clearly evident in the amount of damage that has been reported not just in WA but over east as well, as they're are more cases coming up over there," Mr Boetels said.

"Looking at the damage to one of my clients in east Katanning, we think yield wise about 50 per cent of the lupins and 35pc of the barley have been impacted based on the water use efficiency model.

While the side-effects of using Overwatch are not ideal, Mr Smith said most farmers and agronomists don't want to stop using the product as it was such a valuable tool, but they will be more cautious and want to know what is making it volatile.

"The weed control is just fantastic, so we'll just use a lower rate going forward," he said.

"Wheat and canola are fine, they get a bit white for sure, but they seem pretty tolerant to it, however we probably won't use it too much on barley for a while and we've got to be careful if lupins or anything else susceptible is around, particularly down slope.

"It doesn't mean we stop using it altogether - you don't want to throw the baby out with the bath water as it's a great product, but it's just behaving in a way we're not used to and we'd like to know what's causing it."

"Our team remains committed to answering any questions our customers may have and provide technical support via our qualified agronomy team," he said.

Sponsored by
While international competitors may have been sidelined this year for the Quilton Australian Dunny Derby, competition remained as fierce as ever in the western Queensland town of Winton on Friday night.
Test
The CSIRO has launched a new mission to capture $10 billion in additional value from Australia's agrifood exports within a decade.
Test
A $50 million program to support microgrid pilot projects across regional Australia, announced in the 2020-21 federal budget, was launched by the Australian Renewable Energy Agency on Friday.
Test
Grain Producers Australia southern director Andrew Weidemann says higher than normal mice numbers in NSW reinforce the need for clear advice.
Test
Knowing exactly what type of bull they wanted, plus the determination to buy it, secured Iwona Partnership, based at Mitchell and Hannaford, the top priced bull at the seventh annual Meldon Park Simmental bull sale, held at its new Rolleston venue on Tuesday.
Test
The Buy From The Bush initiative is taking on a new challenge- finding the next big business idea to come out of rural Australia.
Test
Nerada produces approximately six per cent of black tea on the Australian market and credits its success to the Far North Queensland environment.
Test
Not too many businesses have handled the global pandemic that still has its grip upon the world like the red meat industry, according to Australian Country Choice CEO Anthony Lee.
Test