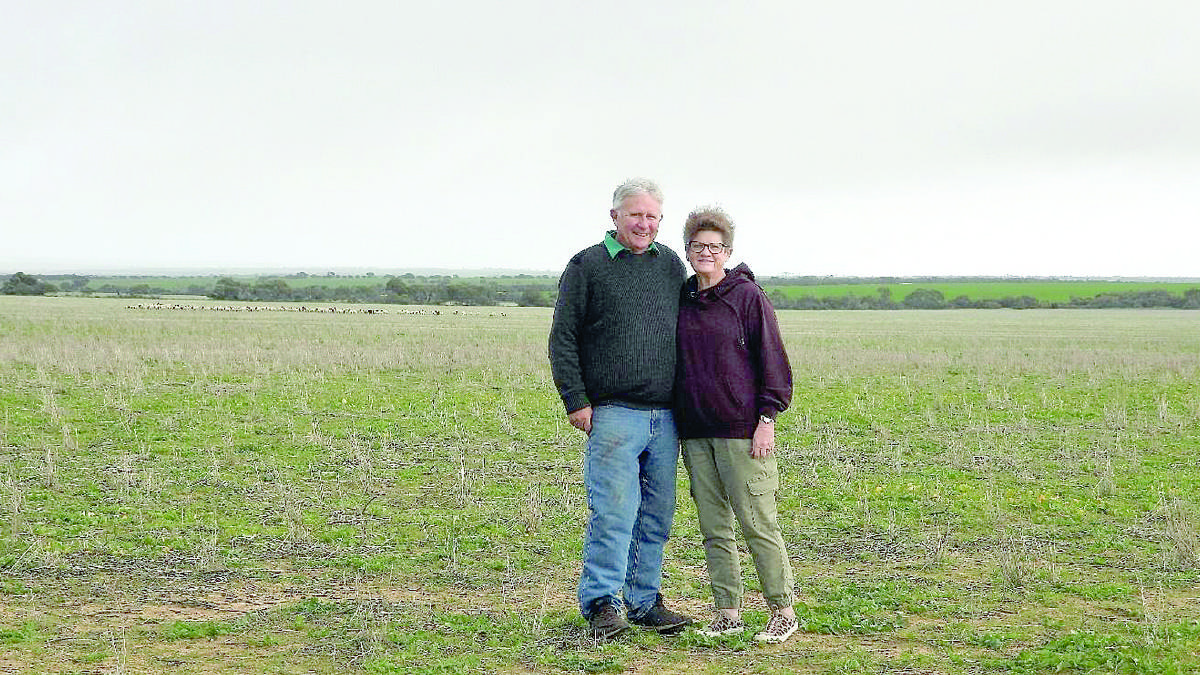 Rick and Colleen Beatty on their farm at North Cadoux where they run 2500 Dorper breeding ewes.

"They're tough animals but if you look after them and give them the right nutrition they will do well."

HALF the breed and half the feed is the advice that Rick and Colleen Beatty follow with their sheep enterprise at Cadoux.

Mr Beatty started farming through the handpiece, as a shearer and bought his first farm at Boyup Brook as a 20-year-old.

During their farming career Ms Beatty worked as a teacher.

They were married in 1979 and honeymooned at a motel named Wintersun which they later used as their farm name.

After a few years they sold the property and bought 809 hectares (2000 acres) of which only 485ha was cleared at Boyup Brook.

When the Beattys started out farming in Boyup Brook, their operation looked a little bit different to the one they're now running.

They had Merino sheep for wool, until the wool industry crashed in 1990.

It was at this time they decided to diversify by helping the then Agriculture Department to bulk grow some pasture varieties.

"We already did some pasture clovers but then as the new aerial seeding varieties like Seradellas and clovers came out we were growing them out as seed crops," Mr Beatty said.

"We had to get into irrigation to grow those crops so we sort of had a very fast learning curve in lots of different aspects of farming."

With the wool market crash they were in search of meat breeds and settled on Dorpers.

"They seemed like the best option at the time," he said.

It wasn't until 2008 that they sold their Boyup Brook property and purchased 5058ha at Cadoux, of which 4249ha was cleared.

"We took the unusual step of heading out into the Wheatbelt but we really enjoy it and it has been a very good move for us," Ms Beatty said.

They now run 2500 Dorper breeding ewes and due to the indeterminate nature of the breed, they lamb every eight months.

In conjunction with their sheep enterprise they also run a cropping program including 350ha of lupins some of which is for the sheep, 600ha of barley, 800ha of wheat and 100ha of oats, also for the sheep.

Mr Beatty said the Dorpers were good doers and well-suited to the Wheatbelt climate.

"They seem to prefer the hot, dry part of the season, performing better during summer rather than winter," he said. 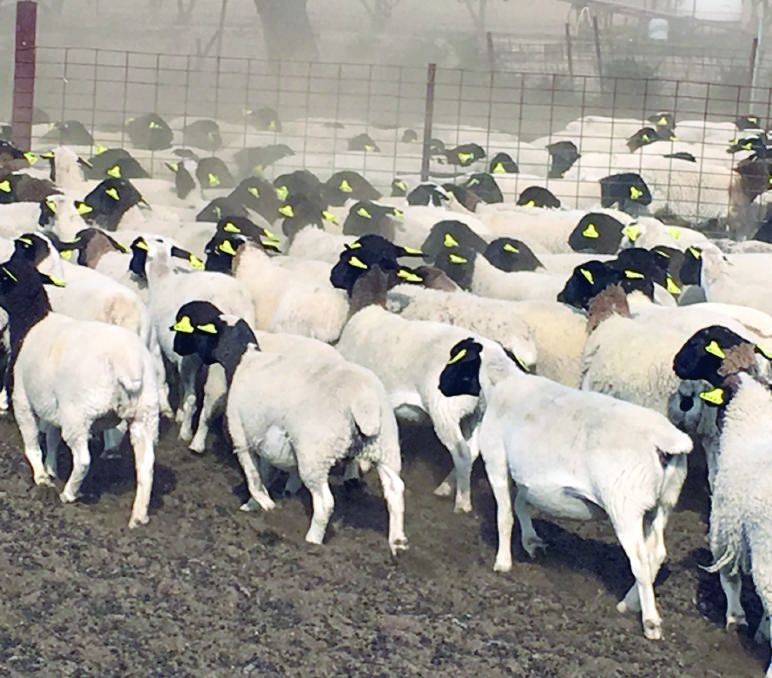 They also like that the Dorpers are low maintenance and fertile.

"From a meat sheep point of view productivity is what we are after," he said.

This year the ewes lambed in early February and the Beattys were concerned about feed availability but with plenty of early rainfall there has been enough feed.

"They have been on green feed ever since they started lambing," he said.

With lambing every eight months, pregnancy scanning the ewes is an important aspect of the program.

Once they have lambed after a few weeks, the rams are put back in with the ewes, with their next lambing is set for August-September then April-May.

The lambs are generally sold to abattoirs but this can vary depending on the market and season.

"We had a contract over there to supply Dorpers," Mr Beatty said.

Price-wise he said they had received some of the best since they first started farming in 1974.

"It has been really good," he said.

One of the benefits of the Dorpers, according to Mr Beatty, is that they don't need to be finished on pellets.

"Our gross income and net income is very close without having to pour in the extra money for pellets," he said.

They source their rams from the Veitch family's Kaya Dorper stud, Narrogin, at its annual sale and when selecting they look for deep bodied, high yielding rams.

"Most of the rams in Adrian Vietch's sale are good rams," he said. 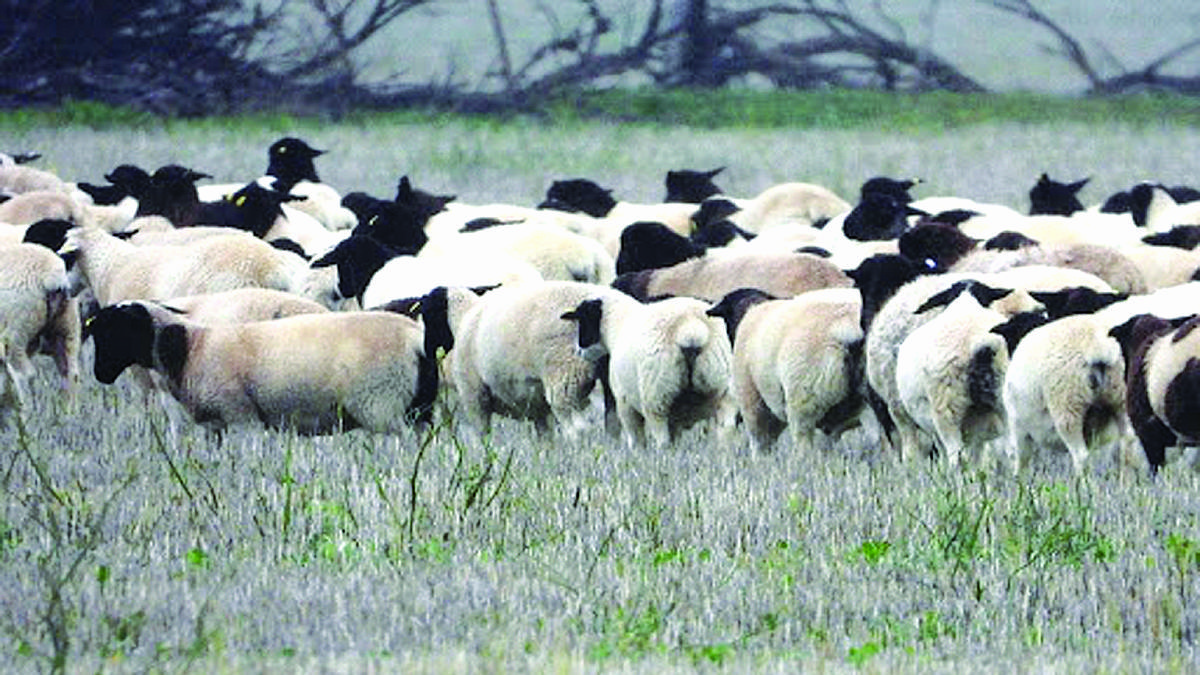 The Beatty's ewes lamb every eight months, and once they have lambed after a few weeks the rams are put back in with the ewes, with their next lambing is set for August-September then April-May.

Their most recent group of 450 lambs that were sold tipped the scales at 53 kilograms liveweight and 27kg dressed weight to yield about the 50pc mark.

"They're tough animals but if you look after them and give them the right nutrition they will do well."

When supplement feeding the Beattys utilise lick feeders, which are filled with grain on a monthly basis.

When required lupins are fed to the young sheep to help finish them off, while the ewes receive oats.

Mr Beatty said they had had mixed seasonal conditions with 2017 and 2019 both being challenging years but they had also had some stronger years including 2020.

So far they had received 170mm of rainfall, which meant they were well on their way to reaching the long-term area average of 330mm.

When managing the flock they sell off a third of their breeding ewe lambs to Russia or if that market is not there they go to local buyers.

As for water access they don't have many dams on the property and as a result have purchased 10,000 litre cup and saucer tanks to increase the number of watering points for the sheep.

Improvements to the Beatty's operation include implementing electric fencing on their boundaries.

They also have a pasture improvement program growing Seradellas and different types of clovers and this year they are trialling some perennial grasses.