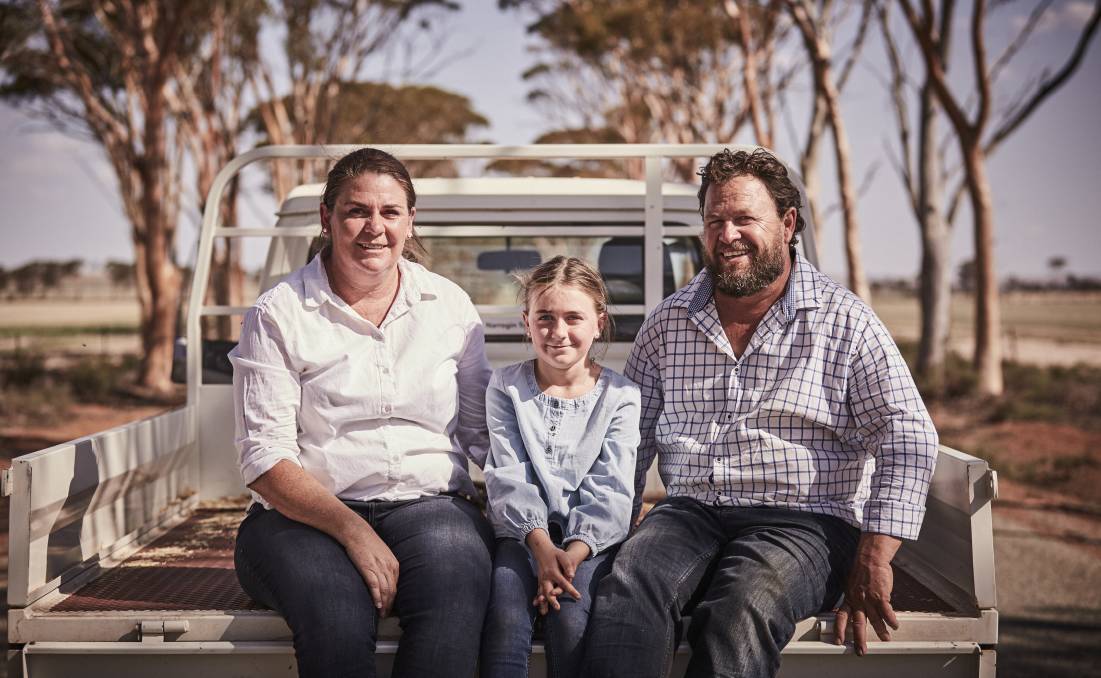 WoolPoll 2021 panel chairman Steven Bolt with wife Sandra and daughter Lily. He said it is important for woolgrowers to think about their preferred wool levy rate.

"This year's WoolPoll comes at an interesting time for the Australian sheep industry..."

WOOLGROWERS have been urged to begin thinking about their preferred wool levy rate for later this year by the Western Australian members of the eight-member independent WoolPoll 2021 panel.

Voting for WoolPoll 2021 will open on Monday, September 13, but woolgrowers need to be thinking now about the level of investment in research, development and marketing activities by Australian Wool Innovation (AWI) they want to see in coming years, WoolPoll 2021 panel chairman Steven Bolt said last week.

"This year's WoolPoll comes at an interesting time for the Australian sheep industry as we emerge from drought in large parts of the country and as we look to rebuild the national flock," said Mr Bolt, a Corrigin woolgrower and mixed farmer, Claypans Merino stud principal and a director of The Livestock Collective.

"We have also seen how the COVID-19 pandemic has impacted supply and demand for wool globally," he said.

"Given this context, it is important for all woolgrowers - not just Merino wool producers - to sit down with the people they farm with to discuss WoolPoll and to start a conversation with their peers about what they want to invest in R&D (research and development) and marketing for wool through AWI."

Fellow WoolPoll panel member and manager of a large sheep enterprise at Boyup Brook, Michael Wright, called on local woolgrowers to show support for their industry by voting in WoolPoll - voting is not compulsory.

"It is crucial we all have our say - don't let someone else decide for you," Mr Wright said.

This year's WoolPoll is the first since the 2018 WoolPoll when a majority of woolgrowers, led mainly by those in WA, voted for the first time to cut the wool levy from 2 per cent of growers' wool sales revenue to 1.5pc.

After a close vote requiring the first ever WoolPoll distribution and counting of preference votes, the levy rate for the three years from July 1, 2019, was determined at 1.5pc, resulting in a significant reduction to AWI's income.

Revenue raised by the levy is AWI's main source of income, particularly as the Federal government matches the amount from the levy that AWI devotes to R&D.

After a review of WoolPoll processes last year by the Department of Agriculture, Water and Environment (DAWE), woolgrowers will be asked to choose in WoolPoll 2021 from levy rate options of zero percent, 1pc, the existing rate of 1.5pc and the previous rate of 2pc.

AWI may also nominate an additional rate for inclusion on the voting paper.

Mr Bolt said the WoolPoll 2021 voter information pack, explaining the options and their impact on AWI funding, will be sent out to woolgrowers in coming weeks and they should check AWI has their current contact details to ensure they receive their pack in time to study it before the vote.

Also following the DAWE review, in WoolPoll 2021 woolgrowers will be asked a supplementary question on whether they would prefer the WoolPoll cycle to continue as every three years or for the interval between polls to be extended to every five years.

Link Market Services will conduct WoolPoll 2021 on behalf of AWI and voting will close on Friday, November 5.

The levy rate to apply from July 1 next year will be announced at AWI's annual general meeting later in November.