Dawson Bradford wanted an easy-care, versatile sheep, without the worry of wool. So he bred them.

Dawson Bradford wanted an easy care, hardy, fertile, well-muscled sheep. But more than anything, he didn't want to deal with wool anymore.

Rather than buying another breed of sheep, the owner of Hillcroft Farms, Lol Gray, WA, took another path. He created an entirely new breed, and now the UltraWhites are making a huge name for themselves.

This versatile shedding, meaty breed has been the result of years of work by Mr Bradford, but the reason it came about was a very personal one.

Mr Bradford had been a stud Poll Dorset breeder since 1972, but it was in 2002 that his life took an unexpected turn - he was diagnosed with cancer.

"It made me stop and think," he said. "It was the workload with the wool. We spent 25 per cent of our time on wool. I'm not a lover of wool - meat has always been my passion."

"I was looking for a breed of sheep to replace the Poll Dorsets, and to get rid of the wool. I needed them to perform in their environment and to be able to take full advantage of the season. And I wanted measured performance. But there were no sheep around the world who fitted the bill."

It was then he thought of developing his own breed. And he already had plenty of experience in genetics. In the 1960s he had horned Dorset ewes, and then slowly bred the horns out.

"I understand genetics and where they can lead," he said. "I wanted a sheep that was hardy and shedded its fleece, but wanted to keep meat." 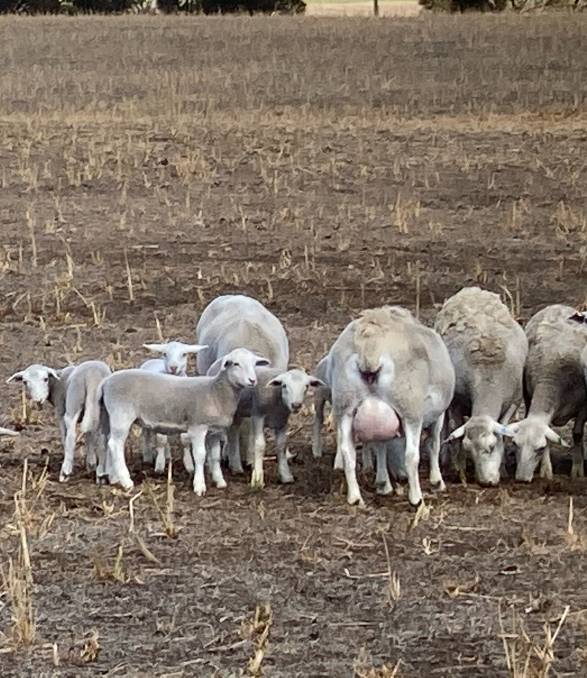 He trialled crossing Wiltshire Horn and Dorper with Poll Dorsets. "And the Dorper-cross was a long way ahead. But the challenge is getting the wool off. Poll Dorset is one of the harder wools to get off."

He said it was when he started breeding with second-cross ewes that the wool started to come off. "We pregnancy tested in June 2010, during a drought, and the first-cross ewes were one condition score less than the second-cross," he said. "And they had picked up the hardiness. That was a turning point for us."

Mr Bradford said it took six generations to stabilise a line, and he continued selecting ideal stock to breed with. By 2014 he reached a point where 98pc of the flock was stabilised. "By the fourth generation, we saw it stabilise quickly."

It was in 2014 that he registered the UltraWhite breed. He said they continued improving structure issues due to crossing the two breeds. "When crossing a heavy Dorset over a lighter Dorper, you could get some shoulder problems," he said. "So we just kept selecting for the right structure."

It was crucial for Mr Bradford that the sheep were measured through Lambplan, and in 2014 he finally had a glimpse of the kind of sheep he'd been dreaming about.

"His number was 8180 of the 2014-drop. He fully shed, he had a short tail, he had good feet, and good structure. We had gone through all the stages of asking ourselves 'when are we going to see it?'."

The short tails started to appear in 2010, and Mr Bradford said they were a huge advantage. At the moment he is still getting some longer tails, but he aims to eventually breed the longer tail out. He doesn't dock the tails of commercial lambs, but does in the stud.

He said UltraWhites had some very impressive features, including inheriting the hardiness from the Dorper. "They have a very sound structure, and have a normal fertility, with a lambing percentage between 120 and 150 per cent with correct management. They can rear twins and triplets. They milk as well or even better than the Poll Dorsets. They are an easy care sheep."

But he said when it came to muscling and growth, some sheep breeds had one and not the other. "The UltraWhite has growth and muscling together. Often birth weights will go up with better growth, but if you take the muscle with it, you will keep birth weights down," he said.

But Mr Bradford, who is the inaugural chairman of the newly formed UltraWhite Sheep Breeders Association, isn't done yet in improving his creation. He introduced semen with the new GDF9 gene to his flock in 2013, working with Professor Mark Ferguson, Nextgen Agri, New Zealand. The gene, which Mr Bradford has been using through his ET program, boosts the number of lambs conceived in the flock.

He said he had the gene stabilised in the flock seven years later, and bred his first double copy ewes and rams this year. Murdoch University will be carrying out testing before any progeny will be sold.

Mr Bradford said at this stage there were six UltraWhite studs in the country, with a number pending. The studs have more than 100 commercial clients. To become a stud, there are some stringent requirements, such as compulsory participation in Lambplan.

But what is most exciting about the breed is it isn't set in stone.

"With this breed, if there is something that is needed of the breed in the industry, then I want it," he said. "We will adapt to what the producer, processor and consumer want to make this a truly all-purpose breed for the sheep meat industry."

The story No wool worry first appeared on Farm Online.