With an emphasis on early growth, muscle and fat, Hamish Thompson is using a range of technologies to fast-track the progress of his family's Moojepin Merino stud. 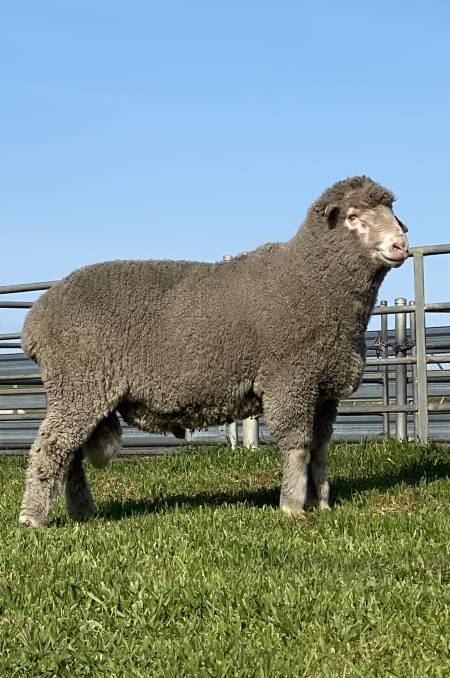 COMMERCIAL DEMAND: Moojepin Merinos aim to breed a resilient, highly fertile sheep that will perform across a wide range of environments in Australia.

With an emphasis on early growth, muscle and fat, Hamish Thompson is using a range of technologies and performance measurements to fast-track the genetic progress of his family's Moojepin Merino stud.

The third-generation family owned and operated mixed farming operation is run by Mr Thompson and his parents, David and Sue, at Badgebup in the Great Southern region of Western Australia.

The Merino stud was established in 1995 and followed the soft rolling skins (SRS) concept developed by Dr Jim Watts, before the Thompsons decided to pursue their own breeding approach in the early 2000s.

Although their flock numbers have taken a hit during the past three years due to dry seasonal conditions, the family is busy building Merino numbers up again, typically joining 2000 mixed age ewes and 400 to 900 ewe lambs.

According to Mr Thompson, their stud is focused on breeding a highly resilient, fertile sheep that will perform in any environment.

"We place significant emphasis on early growth, high fat and high muscle as those are the three main traits that will give you resilience and the ability to handle the tough times," he said.

"We want this resilience on a sheep that is able to be shorn every six months achieving a staple length of 75 millimetres plus.

"Fertility and lamb survival is hugely important too. We want to be achieving more than 130 per cent lambs weaned per ewe joined and be able to join ewes at seven months of age.

"We want our wool to be able to stand up in high and low rainfall environments, so it must be extremely white, have a bold crimp, and be as uncomplicated as possible."

An early adopter of Australian Sheep Breeding Values (ASBVs), the Thompsons have been using performance measurements for more than 20 years as a tool to better inform their selection decisions.

"Figures are a vital tool and we must use them but only after the sheep have been physically classed first," Mr Thompson said.

"We collect a huge amount of data. From the moment the lambs are tagged, they are being recorded, including pedigree, breech cover, body wrinkle, weaning weight, post weaning weight, worm egg count, muscle and fat depth and fleece data.

"They won't come into the yards and not have something recorded against them."

"Post-weaning weight is very important as this gives our clients flexibility. If the season is tough they can turn off lambs very quickly and if the season is good it gives them the opportunity to value-add their own product," he said.

"We have really pushed fat and muscle since the stud's inception and now have some of the highest muscle and fat performance recorded Merino sheep in the industry."

With significant selection pressure applied to fertility in the Moojepin breeding program, the Thompsons have successfully reduced the adult ewe joining period down to 28 days in February, for a July lambing, while their ewe lambs are also joined at seven months of age.

"Ewe lambs are your best genetics on the farm so it is all about getting them working for you as quickly as possible," Mr Thompson said.

"We've done a lot of trial work in collaboration with Murdoch University to work out best practice management for joining ewe lambs.

"The results have varied significantly but across a 10-year average, we are getting 59 per cent conception and 71pc reproduction rate.

"We've still got a lot to learn, but we've bred some really good progeny from our ewe lambs, which is encouraging and demonstrates the potential they have."

All the adult ewes are single sire mated with the five-year conception rate averaging 92pc per ewe joined, the reproductive rate is 151pc and the weaning rate averages 124pc.

"Our target is to increase our adult ewe scanning rates to 175pc to achieve a weaning rate of 140pc-plus," Mr Thompson said.

Moojepin currently sells about 300 rams annually, with 150 offered at their annual on-property sale, on Friday, October 1. The sale is also interfaced with AuctionsPlus, enabling interstate clients to easily bid.

Demand for their rams has grown significantly during the past few years, with increased numbers of buyers coming from Victoria and southern NSW, along with plenty of local support. 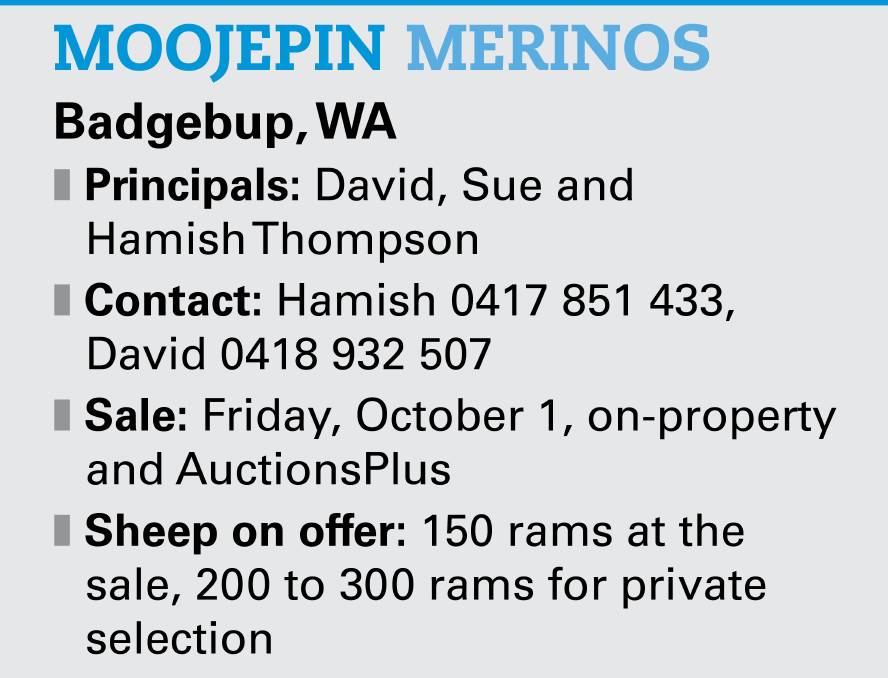