The problem of a lack of labour to work at harvest time has not gone away with contractors predicting an even worse situation this year. 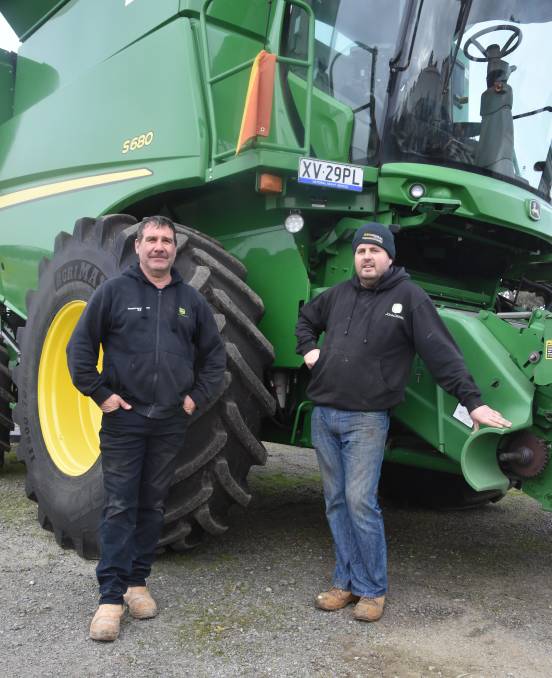 Scott Hoffmann and Andrew Lamont, Hoffmann Contracting, say it is getting harder to attract workers to follow the harvest down from Queensland to Victoria.

GRAIN producers set to cash in on a favourable season could have a spanner thrown in the works due to a crippling lack of harvest contract labour.

Last year there was a mad scramble to find suitable harvest labour, but industry officials have warned this year will be even worse.

"There are normally about 120,000 international ag workers in Australia, last year there was 25,000 and this year there is even less," said Rod Gribble, president of the Australian Custom Harvester Association.

"We rely heavily on international skilled labour to help get the crop off, this problem has been building for years and this year it is going to come to a head," Mr Gribble said.

"If we don't get some solutions I think we could see contractors exit the industry, they may have their own farm and will just concentrate on that and while that is OK in smaller years in the big years the industry really needs contractors to get the crop off."

Victorian-based contractor Chris Bartlett, Bartlett Brothers Harvesting, said in spite of an extensive campaign to recruit staff for the upcoming harvest he had struggled to attract people.

"We are badly missing the international workforce," Mr Bartlett said.

"I think it sells them short describing them as backpackers, what we have attracted from countries like Ireland, the UK and Canada in the past is a skilled workforce," he said.

"Not having access to that skilled workforce has made it really tough, we've advertised everywhere, universities, ag colleges, farming communities all through the eastern states and SA but it has been really difficult to get anyone."

Mr Bartlett said the labour shortage could have a big impact if there was a wet harvest.

"We talked about it last year but we probably dodged a bullet in that after the first rain we didn't have the follow-up falls that would have led to downgrading."

"If we do get those type of weather systems it would be terrible if farmers, especially those still recovering from the drought, suffer serious downgrading or even have to abandon paddocks."

Andrew Lamont, Hoffmann Contracting, Horsham, agreed that staff were hard to get.

"It's harder than usual, obviously there's less coming from overseas, even though we've been in touch with people who would be keen to come across if they could."

"There are a lot of people are involved in their own farm business and can't commit to the time it takes to follow the headers down, but we aren't getting a lot of interest from younger people that don't have those other commitments."

Mr Gribble said his organisation was working together with Grain Producers Australia to come up with solutions.

"Last year we saw some people retraining from other roles to drive headers, we're again making sure we look at all options to see if we can find more workers."

He said there were several demographics that had been identified that could provide more workers.

"We're seeing more and more female workers but we believe we could increase that number further," he said.

"The feedback from farmers and the employers is generally terrific in regards to their female employees.

"We're hoping to attract more female workers and will look at what needs to happen to get them to take these jobs up."

He also said there may be opportunities for older workers.

"People who have semi-retired, we may be able to coax them back, again the employers will have to look at how they can make it happen but that is something to look at."

Mr Bartlett said he was hoping to get some older workers, but said other commitments made it difficult.

"It's hard, we've got ag college students who are keen, but they have to finish the school year, we've got some older blokes interested, but they have their own hay and things to worry about, finding people who can work all the way from Central Queensland down to the Western District is really difficult at present."