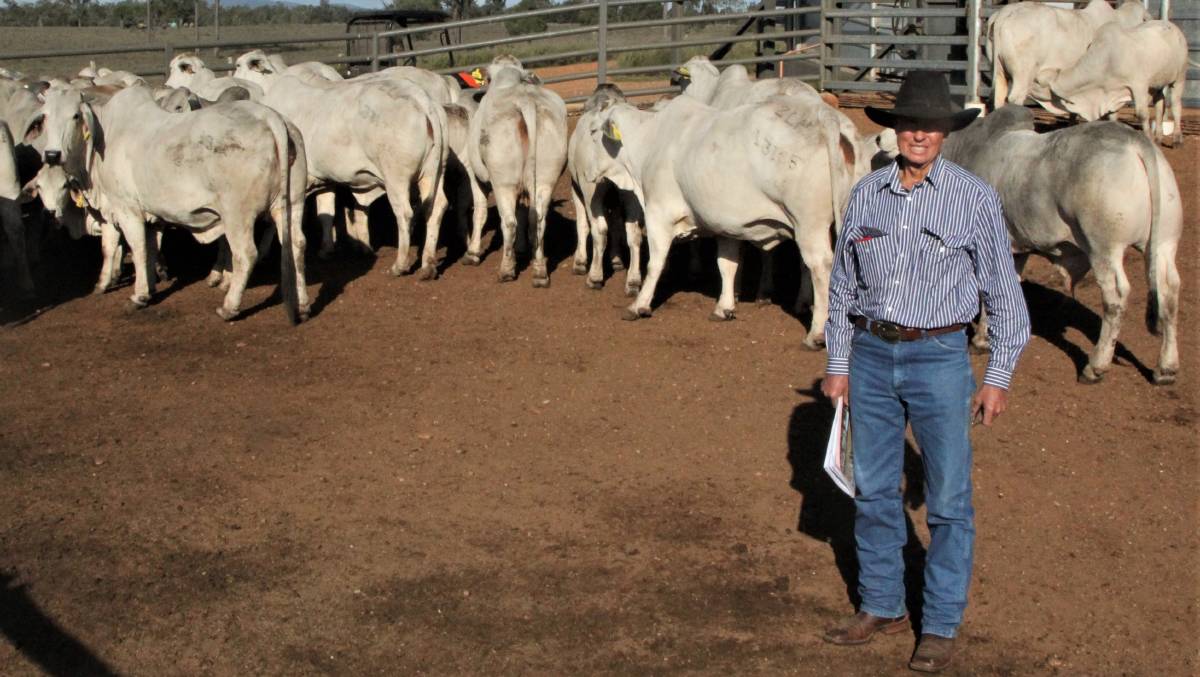 Elrose's Rodger Jefferis pictured with some of the cows and calves sold on day one of the major reduction sale.

The compliment that Australia's commercial cattle producers paid Rodger and Lorena Jefferis in creating an Australian record for a single vendor beef cattle sale at their Elrose grey Brahman major reduction sale is the ultimate reward for the pair who have dedicated a lifetime to the industry.

The compliment that Australia's commercial cattle producers paid Rodger and Lorena Jefferis in creating an Australian record for a single vendor beef cattle sale at their Elrose grey Brahman major reduction sale is the ultimate reward for the pair who have dedicated a lifetime to the industry.

Over three momentous days at the Inverrio sale complex at Duaringa last week the grey Brahman stud from Cloncurry sold 924 lots for a gross of $6,393,750, or an overall sale average of $6920.

Part of that number was 700 weaners sold with their mothers.

The auction was supported by 97 individual buying entities who helped set a new record for the Australian beef industry as the largest and highest grossing single vendor auction sale of stud cattle.

Speaking at the conclusion of the sale, Mr Jefferis said it was a great result, made even more so by the fact that it was mostly commercial money being outlaid.

"It was very heartening that our angle, to breed a more profitable beast that is relevant to the commercial world, was supported by commercial cattlemen," he said.

They came from all areas of Queensland, from the Atherton Tableland and Gulf areas through to the Brisbane Valley and Darling Downs.

Some from NSW were there in person but there were more online, along with buyers from the Northern Territory.

Selling agent Ken McCaffrey said the strong buying support from northern Australian bull buyers and commercial producers was a feature of the sale.

Such was the volume on offer that he and the Queensland Rural auctioneers Troy Trevor, Nick Malone and Wayne York were dropping the hammer at an average of just over a minute a lot.

"It was a challenge to market this number of stud females at auction - it hadn't been attempted in the industry before," Queensland Rural manager Troy Trevor said.

"However, purchasers recognised the unique opportunity that this genuine reduction sale of Elrose stud females presented, and they backed it with very positive, sustained bidding."

The sale's offering of proven sires on the third day was very popular, resulting in a top price of $40,000 for Elrose Jude 11861, purchased by McCaffrey's as agent for a northern client.

The $18,000 sire Elrose 17913 was a final day purchase for Richard and Victoria Moffatt, Muldoon, Marlborough.

The couple put a lot of time into researching the Brahman Group Breedplan credentials of the sale's females and were active bidders, with a selection of 39 females and 36 calves.

Peter and Toni O'Neill, purchasing for Glenyarran Station Pty Ltd, Springsure invested in a high quality line of 28 cows and 25 calves from the top end of the offering.

The $28,000 top price cow and calf unit came on the first day of the sale, Elrose Maddison Manso 14140, a 5yo daughter of Elrose All Class, presented with a nine-month-old bull calf and a seven month pregnancy.

Many studmasters were active in the bidding for her before Scott Angel, Glengarry Cattle Co, Kunwarara made the winning bid.

She was purchased by a partnership of Paul and Catherine Mackenzie's Arizona Stud and the McCamley Family's Palmal Stud, both of Dingo.

A rising five-year-old, Elrose 15415, a daughter of Elrose Millionaire, is heavy in calf so her purchasers the Scott family, Ruan Grazing, Clermont will not have long to wait for a return on their investment. Vendor Rodger Jefferis chats with potential vendors at the end of the first day of the reduction sale at Inverrio, Duaringa.

The biggest of these were Mal and Sue Burston, Brookston Pastoral Co, Nebo who took home 107 females, including 33 cows with calves at foot.

Stewart and Sarah Borg, Leichhardt Brahmans, Sarina secured 73 females plus 39 calves. Their top purchase, at $13,000, was Elrose Candy 11522, a seven-year-old cow with a bull calf at foot.

Roland Everingham Jnr put together a line of 45 females and 42 calves for Oak Park Station, Einasleigh.

As well as bidding to $14,000 on two occasions for quality young cows from Elrose Stud's Round Paddock, each with heifer calves at foot, they invested in three of the sires, bidding up to $15,000 for the rising five-year-old bull Elrose 15312.

Every lot was sold with its pedigree listed, including that of the calves, born and unborn, Breedplan EBVs, and pregnancy status.

Mr Jefferis said they had been mustered by paddock, with none taken out, and trucked, paddock by paddock, south to Inverrio.

"It's ironic, because of its name but the paddock with the highest average was Starvation Paddock, named by Lorena some years ago," he said. "It doesn't look much but in the drought it kept 400 cows going with lick and roughage."

Mr Jefferis said they were hugely indebted to Brett Nobbs, his family and their staff for giving them what he described as the only place in Australia capable of hosting a sale of the magnitude that took place.

Speaking before the sale began, Mr Jefferis said it was with a bit of sadness that he looked out on the lines of female cattle, but also pride to have been able to put them together.

"It's something you probably will never see again," he said.

The story Elrose's sale of the century first appeared on Queensland Country Life.