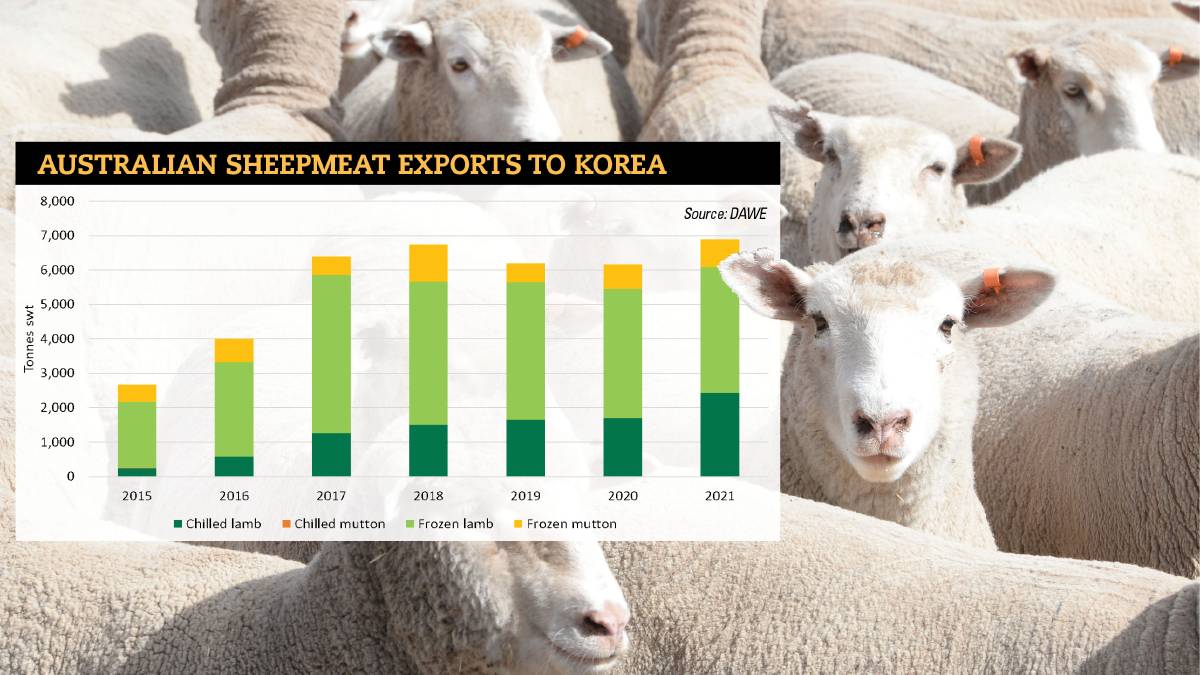 Emerging markets in North America and Korea are signalling an undeniable appetite for Australian lamb as consumption trends continue to grow for what was traditionally looked upon as a niche product.

And according to the latest Meat and Livestock Australia figures sheepmeat exports to both Korea and North America are experiencing a healthy growth despite the COVID outbreak.

"Korea have really stepped up with increased prices and there is growing penetration of country origin labels," Mr Cox said.

"Lamb recorded 15,000 tonnes in exports, and it wasn't long ago it was one or two thousand tonnes a year, so Korea has been going great guns for Australian red meat."

Sheepmeat exports to Korea for the calendar year to May grew 12 per cent year-on-year to 6890 tonnes swt, driven by steady growth in chilled lamb exports.

Chilled lambs exports reached a record high in the 2021 fiscal year with a total shipment of 5700 tonnes shipped weight.

Mr Cox said sheepmeat is traditionally a niche protein, unfamiliar to the majority of Korean consumers.

However, he said lamb is gaining traction, amplified by online and offline retail efforts to capture changing consumer lifestyles and interests following the COVID-19 outbreak.

"Social gatherings and eating out are important aspects in Koreans' lives. Continuous social distancing measures have resulted in shifts in consumption behaviours," he said.

"In particular, more consumers are looking for ways to make their life enjoyable as they weather the pandemic, with cooking new food either at home or outdoors on camping occasions a growing trend.

"This has created an opportunity to grow lamb consumption in Korea through both brick-and-mortar retailers and e-commerce channels."

But Korea isn't the only new market having a stellar run with North America taking it up a notch albeit off the back of beef's high prices and low supply.

"Because beef supply has tightened, and global beef prices are so high, lamb has actually become a bit of a beneficiary to beef," Mr Cox said.

"We've had pretty strong retail demand for meat from Americans during the last 12 to 18 months.

"It was a record year last year in North America for lamb in the US and in Canada.

"Canada is now a decent emerging market for lamb.

"We think there is really good opportunity there and we are looking to extend our program into Canada next year.

"In Canada we have a market with wealthy, urbanised consumers who have a taste for quality food and that's the sort of market our products really suit.

"Canada is not a market we have invested much in the past in terms of market development, we tend to focus on certain parts of the US, but there is no reason why we can't give Canada a good shake in the coming period."