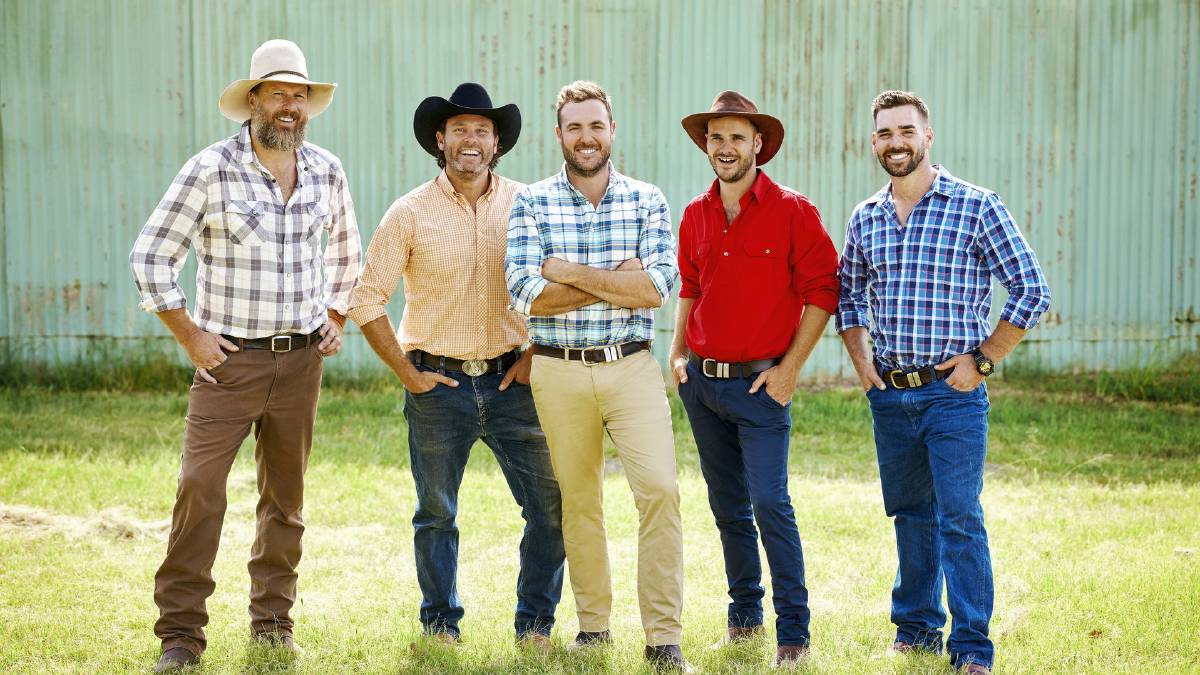 POSING IT UP: Farmers Rob, Will, Andrew, Matt and their friend Sam. Photo: Channel 7.

NO episode of Farmer Wants a Wife is complete without a seductive hippo.

So lucky Episode 10 had one. Phew!

Ah, I love Nat's "last time" part on each episode before we launch into tonight's mess. Why don't they just list the facts of the night: "Rob showed off batting skills he learned personally from Don Bradman, and Sam showed he bowls like he's stuck in an electric fence".

So, the farmers are taking one special lady for the final date. It's a big date, so of course I was imagining every girl's dream date: chicken schnitty at the local pub. 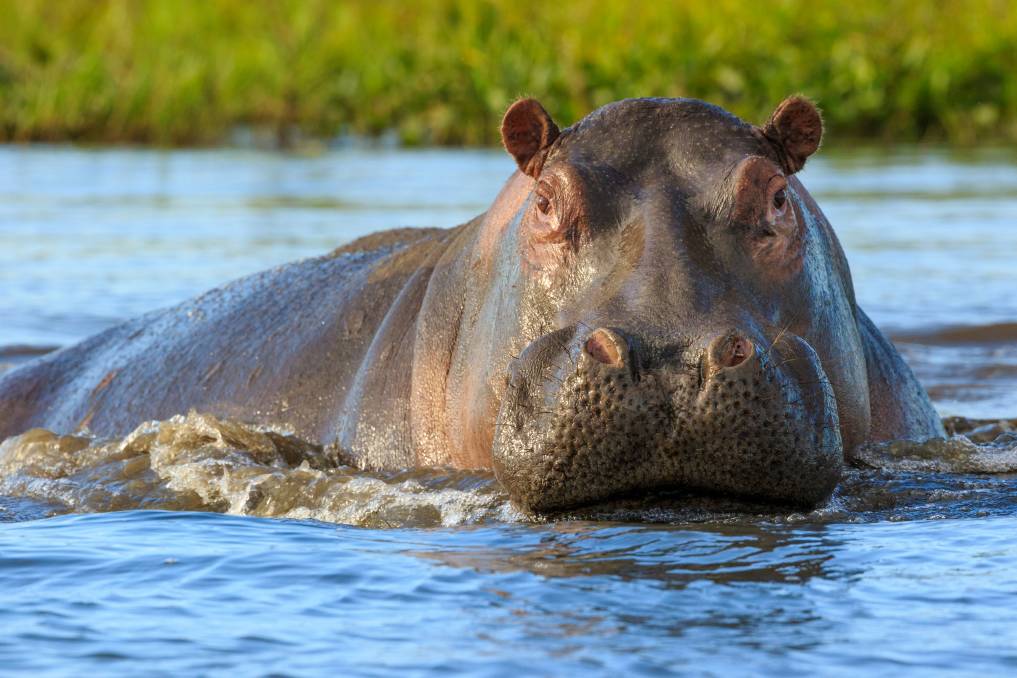 FLIRT: A hippopotamus, not unlike the one Farmer Will was observing, perhaps a little too closely, on last night's episode. Photo: Shutterstock.

We're told before the dates that each farmer has to choose only two ladies to stay. Farmer Matt has got some spray mark and yards ready so he can effectively draft two from his large mob.

Once again, cue dreamy images of the farmers staring into the distance, silhouettes against the sunset and intense dog patting.

But alas, the lads have gone all out for the final date.

Farmer Sam with a woman's hat takes Mackenzie abseiling. If dropping off a cliff with a wedgie and freezing cold water pouring on your head doesn't seal the deal, nothing will.

Farmer Matt takes Hayley for a massage. We can feel the relaxation from here - getting partially nude on national television and having an intense convo about not getting enough attention. Ah, how's the serenity?

Farmer Andrew's gone and got a flash bike to go for a ride with Rach. And he's wearing leather pants. Oh man.

He burns off with Rach still waving to the ladies on the verandah and she nearly gets bucked off. It probably would have hurt less than what was to come. 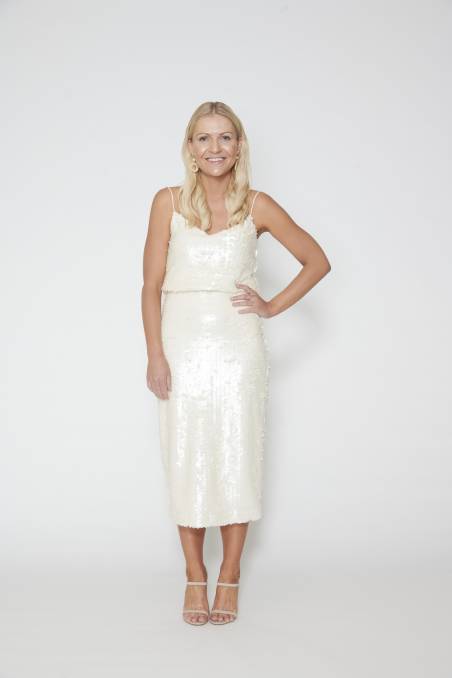 GONE: Rachael, who is considered to be a good friend by Andrew but nothing more. Photo: Channel 7.

They drive around some road, but it appears they end up back on the farm. And with helmet hair, they have a lovely picnic under a tree.

And then it goes downhill pretty quick. Andrew tells the lovely Rach he thinks they're just friends. She takes it like a boss and goes and has some alone time by the dam.

Andrew takes his opportunity to gobble the rest of the picnic and then joins her after what seems a few hours on the dam bank.

She decided to go home. We're sad to see her go.

Farmer Will has again taken a lady to the epitome of romance - Dubbo. Yep. Take that, Nyngan.

He's taken Kristina to the Dubbo zoo. He's taken a zoo keeper to the zoo for a date. That's like my husband parking me in front of my computer and saying: "Here's a romantic date for you, darling. You're going to spend the day writing about EBVs". Seen it.

There is plenty of exotic animals on display. Will strokes a tortoise suggestively, and starts shamelessly flirting with a hippo.

Kristina sees him poking his tongue out at the hippo and gets jealous. Or maybe she's just terrified Will is going to invite the hippo back to his farm.

They have a nice chat, and Will tells Kristina this has been his favourite date of all. We hear a lion roaring in the background - or was it Jaimee?

Next our woolly Farmer Rob takes Kate the psychologist on a date. She draws diagrams on napkins while Rob guzzles oysters.

It's like all those lessons at school where you had no idea what the teacher was talking about so you just nodded and sneaked a Crunchie from under your desk.

A storm has set in at Farmer Will's. Jessica (you know the lady who broke her wrist in a frenzy of late night gardening - as you do) sits down and tells Will she feels like there is no time for her. Uh oh.

Meanwhile another storm is setting in at Andrew's. He's got some lambs in to weigh. Thank gosh he's got our favourite man in to help. Chops for prime minister!

After excessive use of the tin dog, Ash sets Jess a challenge - whoever does the best job drafting gets alone time with Andrew. We already know how this will go. 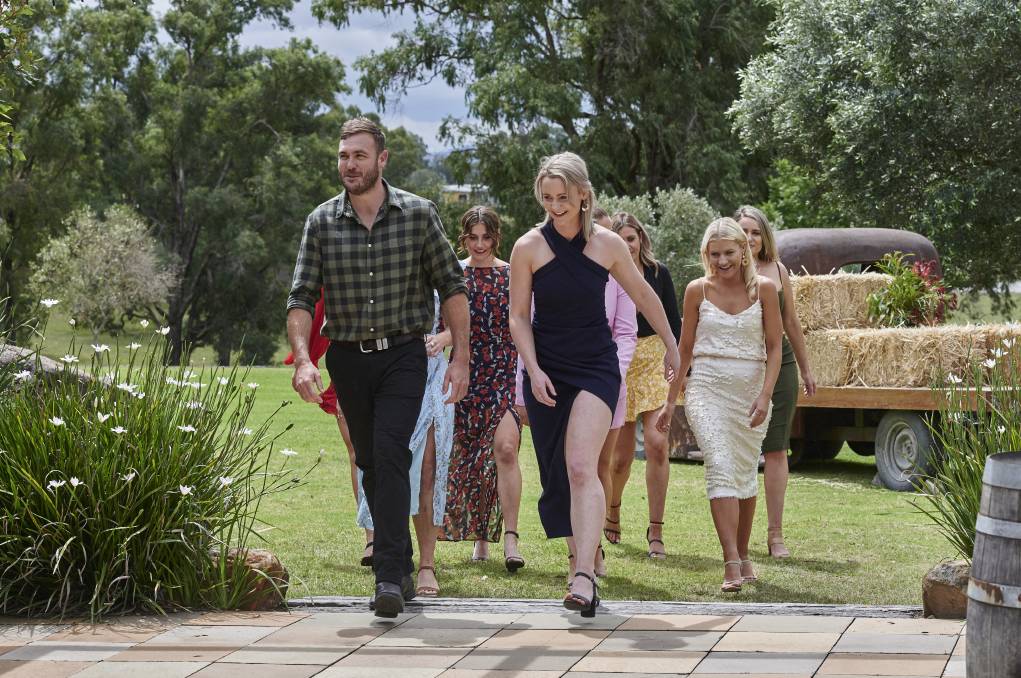 A SIMPLER TIME: From episode one, back when Farmer Andrew only had about eight general headaches, not just two intense migraines. Photo: Channel 7.

Ash makes 11 errors. Jess makes 576. Or thereabouts. She snaps the carrot and leaves the yards in a huff.

Farmer Will returns to the house after yabbying with Kristina and Jaimee. And guess what? Broken wrist lady has bailed. Will suggests they look for her.

The ladies check the bedroom, and then come back to find Will has gone back to sorting out the yabbies. He's clearly very concerned.

Farmer Matt has decided it's best to draft in daylight - you know, so you don't cull the wrong ones. He takes Jacqui and Brydie off under a tree and performs the double dump. Again, it's sad to see some top chicks leave.

Cut to Farmer Andrew and Ash huddling under a blanket on the back of a ute as the rain and wind lash them. Apparently getting in the ute cab did not occur to either of them.

And then we're back to Farmer Rob's for something truly spectacular - Rob in snazzy boardies.

Leah, the mountain guide with hay fever, has taken Rob down to the freezing river and is preparing to dunk him in it.

Rob looks terrified - apparently with two lumps in his throat. We feel your pain, big fella.

There is a lot of talk of trust and bravery before Rob dips under the water and is baptised. He says he feels alive as he stumbles out of the water jackhammering - that's the adrenaline. You nearly died, dude.

Ok - we're up to the farewell dinners.

But my favourite moment of the night was at Andrew's farm. Ash and Andrew snog by the fire. Then Jess turns up and starts using cooking marshmallows as a theory on life. Deep. 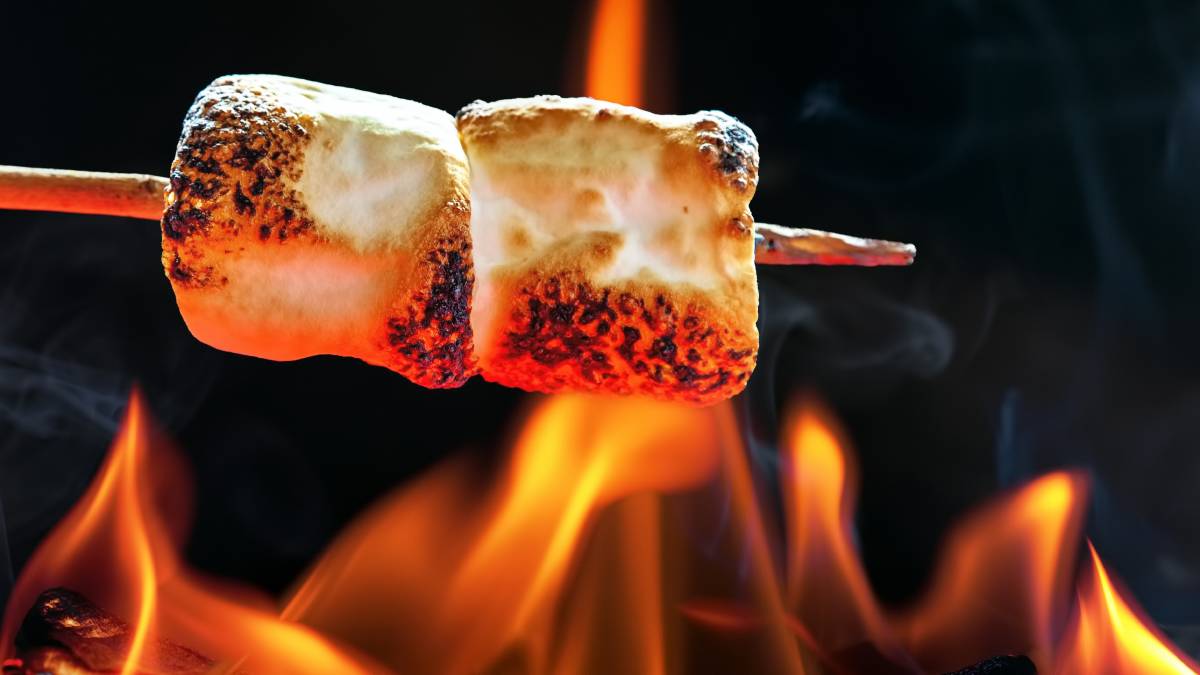 DEEP: Toasted marshmallows - the stimulus for deeper thoughts on the universe and life, according to Jess. Photo: Shutterstock.

Then she pulls the trump card. She tells him she has fallen in love with him.

And he responded with the line every girl wants to hear after she tells a man she loves him.

Farming tip of the day: When slashing grass, it is best to not pick up the cut grass by hand. That will take a week.