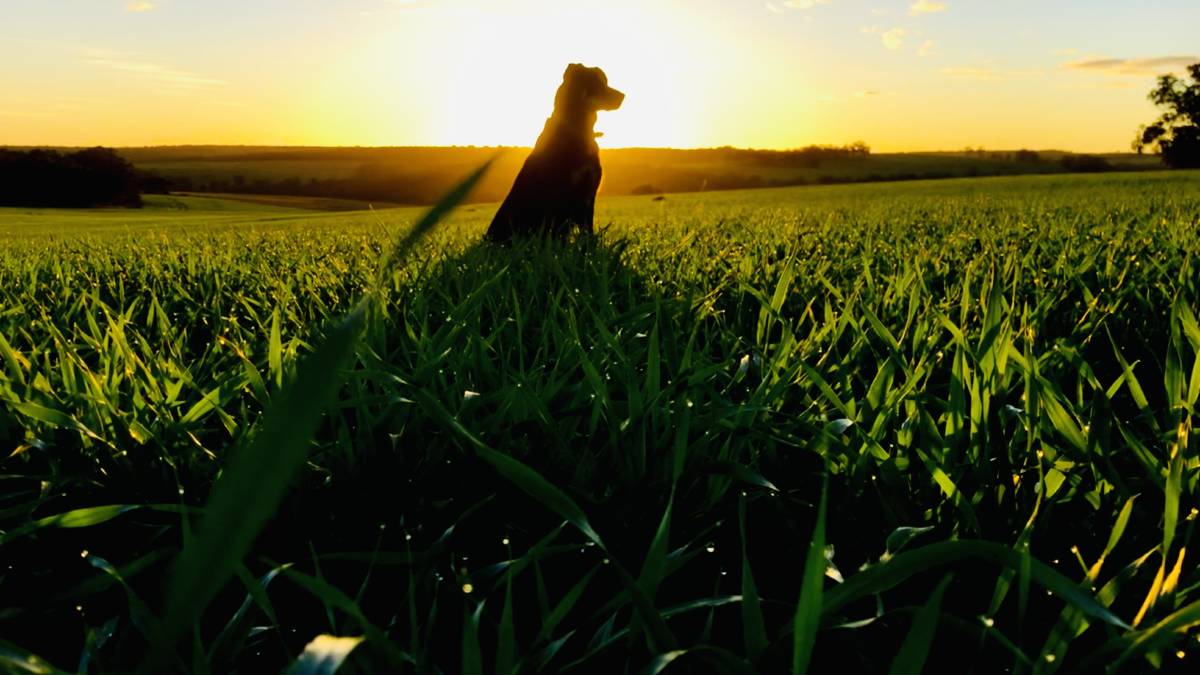 Boots the dog was enjoying the sunset while he inspected this barley paddock. Hugh Hudson, who took this photograph, farms mixed cropping and cattle with his parents at Kendenup and said since the excellent start to the season when they were seeding into moisture, it has being going quite well, although there have been a few issues. "Since seeding has being quite wet, now we're having issues with water logging and washouts," Mr Hudson said. "All the canola has filled out well and has begun flowering within the past (couple of weeks). The cereals have excellent establishment and only the later couple of paddocks (that were) seeded have been greatly impacted by the wet conditions. As of yet we are unable to get back on them to reseed." As at July 15, the farm had received 400 millimetres so far for the year, which has come in ebbs and flows. "For the first half of July we have had 67mm, which is a turnaround from last season where the first half of July we only received 4mm. Yesterday (July 14) we had 9mm and at beginning of the week another 10mm." Going forward, Mr Hudson hoped to have a couple of weeks of sunshine to help dry the farm and enable them to get back out into the paddocks. "What hasn't been affected by water logging has great yield potential," he said. "(This year is a) very different season to last year with a lot more water around the place and the dams are all full now, which is great to see especially from the stock point of view. This year has been unusual in the fact that we don't get this much rain so early on in the season." The family mostly grows canola, barley and oats (both for grain and hay), as well as running a Murray Grey herd of about 100 breeders on uncroppable areas.

Grain & livestock farmers across the State said the excellent start to the season had continued with good rainfall.

EARLY July rainfall might have caused issues for some farmers, such as waterlogging or with trafficability, but generally it was well received by growers across WA's agricultural region.

Farm Weekly has spoken to several grain and livestock farmers from across the State, who said the excellent start to the season had continued with good rainfall.

Although some areas were reported as being a bit too wet for crops, livestock producers were loving the rain with plenty of feed on the ground and large amounts of water in dams, including many being full.

Overall, farmers generally felt positive about the season ahead and had their fingers crossed that the good conditions would continue and lead to a soft finish for harvest.

Earlier this month, a cold front moved across the South West and southern regions of the State and an associated low pressure system in the south tracked across the Great Australian Bight, according to the Bureau of Meteorology (BoM). 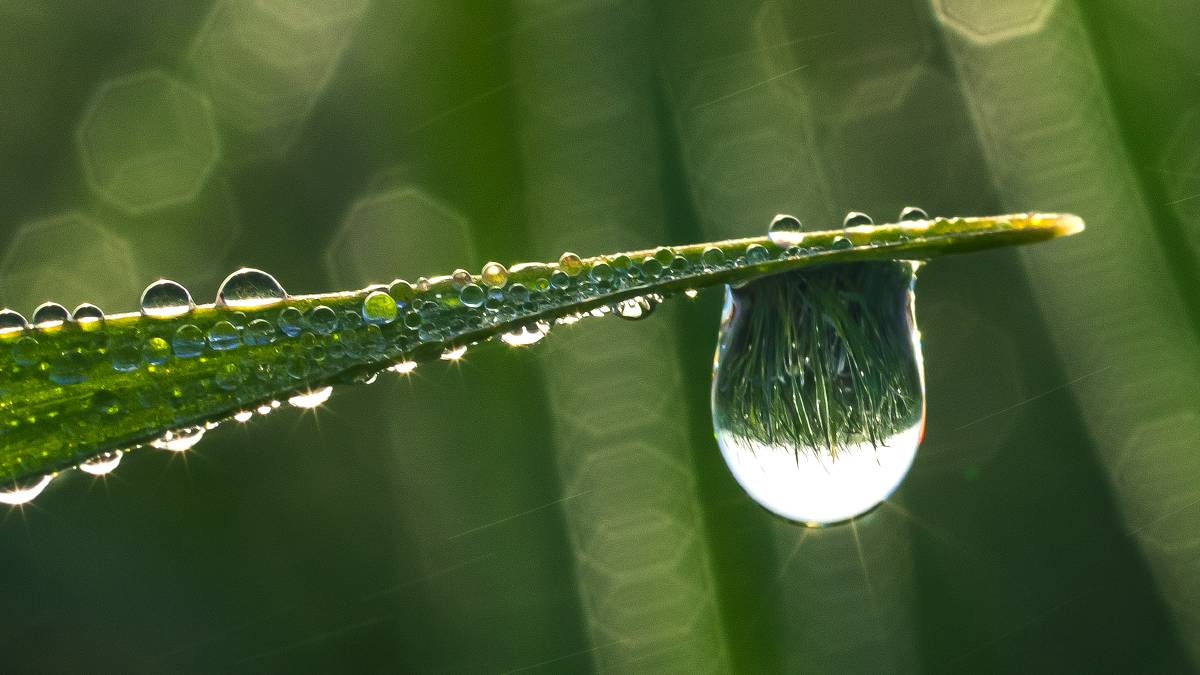 Although there's still a while to go until harvest, Tania Daniels, north of Tammin believed that most farmers in the region were pleased with the season so far. "There's obviously a long way to go before harvest but the rain has been something we have needed for a while," Ms Daniels said. "Up until mid July we've had 233 millimetres, which has been really good as most of it has actually fallen in the growing season. This time last year we had only received around 109mm and half of that had fallen in February and March." Despite a few heavy rainfall events, fortunately the property has had no damage to fences or infrastructure. The family has a mixed cropping and sheep enterprise, with a few hundred ewes that have been lambing in great conditions. "This year has been very kind and it's the first year in a while we have had a lot of green pasture," she said. "(In) previous years we were constantly putting feed out and having lambing problems so this year, with only one bottle-fed lamb, it's quite relaxed at the moment. We do need to keep an eye on fly strike as some of the ewes are scouring slightly but the cold weather is keeping the blowflies at bay. We will be vaccinating the lambs soon so everything will be health checked." With this season so far being better than last year, Ms Daniels said she was feeling very positive for the rest of the season. Photo by Tania Daniels.

"Widespread moderate rainfall was recorded in most of the South West Land Division (SWLD), with heavier daily totals of 30 millimetres to 60mm recorded in and around the Perth metropolitan area, and South West and south coast," BoM stated.

The bureau recorded another strong cold front across the South West and southern districts of WA, along with a pre-frontal trough and associated cloudband extending from the North West.

"A strong low pressure system, connected to the front, tracked across the south west of the State," BoM said.

"Widespread moderate rainfall totals were recorded in the Gascoyne, along the west coast and far south west of Western Australia, with light falls in the northern and eastern SWLD and the adjacent Goldfields District."

Rainfall totals exceeded 100mm in areas from the Perth hills down to the forest regions of the South West, along with recordings more than 50mm in western parts of the SWLD, and between 10-50mm of rain was reported in much of the Gascoyne, Central West districts and other areas of the SWLD.

In comparison, rainfall in July 2020 was below average for most of the southern half of WA and areas in the Pilbara had moderate showers. 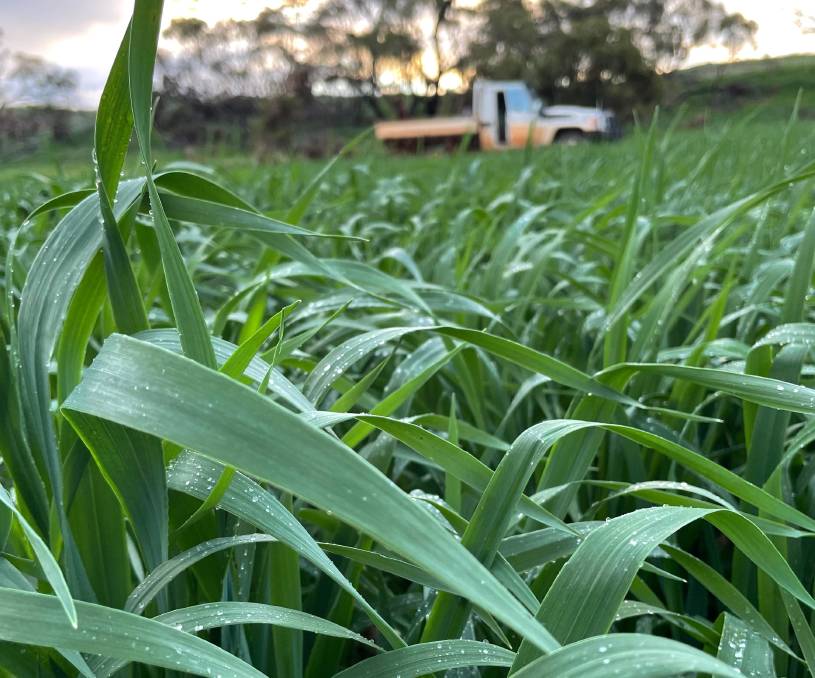 At Eradu, aside from the timing and damage associated with ex-Tropical Cyclone Seroja, grain farmer Fiona Mann, who took this photograph, said so far the season had been great. "The 2021 season has felt like it should winter is actually behaving like winter," Ms Mann said. Last week the farm had 30 millimetres of rain, adding to a total of 275mm so far for the year. The Mann family farms wheat, canola and lupins, along with running a spraying contracting business and boutique cold pressed canola oil, Block 275. "This season has been a welcome change to the past two in terms of getting a knockdown and not having to dry seed everything," Ms Mann said. "(We're feeling) really positive about the next few months just need it to be a gentle finish."

Most of Australia is likely to receive more than the median average of rainfall for August to October, with a 60 per cent chance of exceeding the median.

Western parts of WA have about equal chances of above or below median rainfall (chance of exceeding the median is close to 50pc).

The pattern for the months of August and September are similar to the August to October outlook, although the likelihood of exceeding the median is not as high.

In August, parts of the WA west coast are likely to be below the median.

Temperature wise, maximum temperatures are expected (more than 60pc chance) to be warmer than average in western and southern areas of WA. 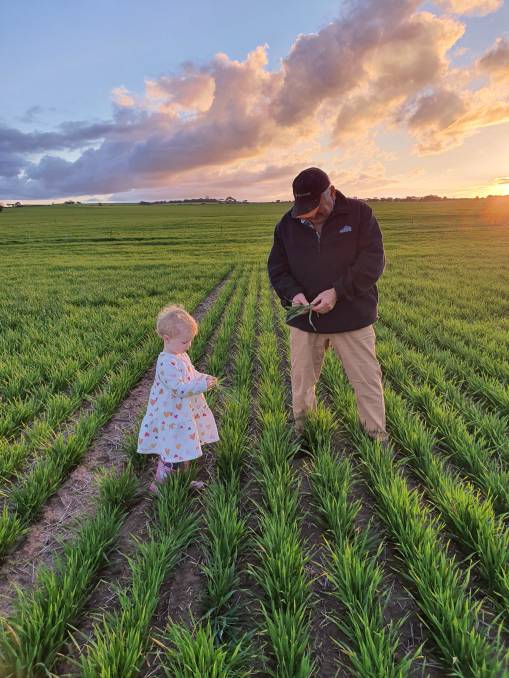 Mike Ferrari inspecting his Spartacus barley crop with his granddaughter Ella, 3, in Corrigin. With 300mm of rain received so far for the year, the season look positive for the family. Photo by Michelle Ferrari.

Below median daytime temperatures look to be more neutral in August for western areas of the State, and then warming up into September.

Minimum temperatures for August to October are very likely to be warmer than the median for most of Australia (chances are greater than 80pc), however southern and central WA have slightly lower chances (60 to 80pc chance).

Likewise, minimum temperatures for August and September are likely to be above the median. 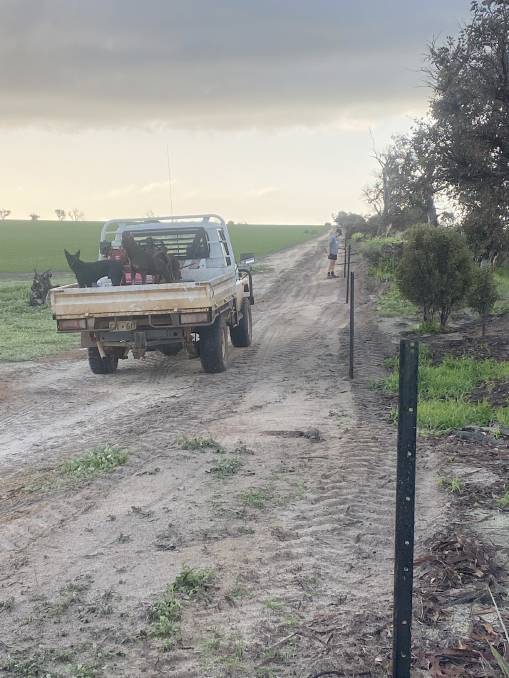 Regular rainfall has delayed spraying a little on Steven Bolt's farm at Corrigin, however there's "definitely lots of odd jobs getting done here at the moment", including fencing as pictured. He was hoping to get into some paddocks this week for spraying before the next system turns up. Photo by Steven Bolt. 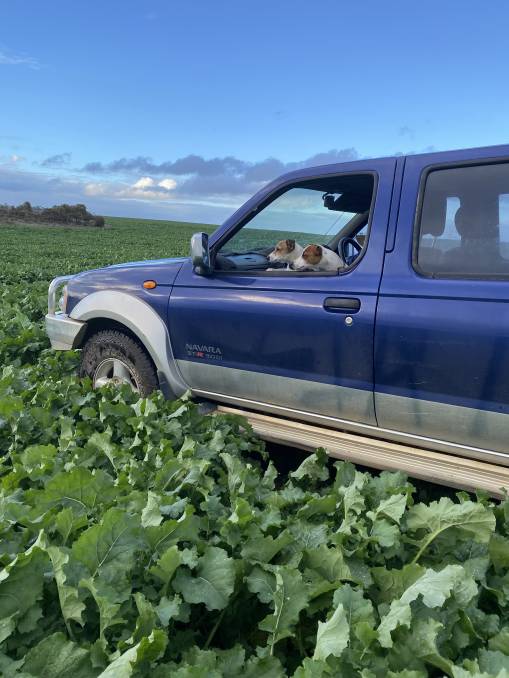 Jack Russell puppies Trevor and Ronnie checking out the canola on Saddleworth Farm, Allanooka. "The crops are all looking fantastic and are bounding away," said Tegan Winterbottom who sent in this photograph. "It's shaping up to be a ripper of a year with continuous rain and sunshine providing perfect growing conditions." 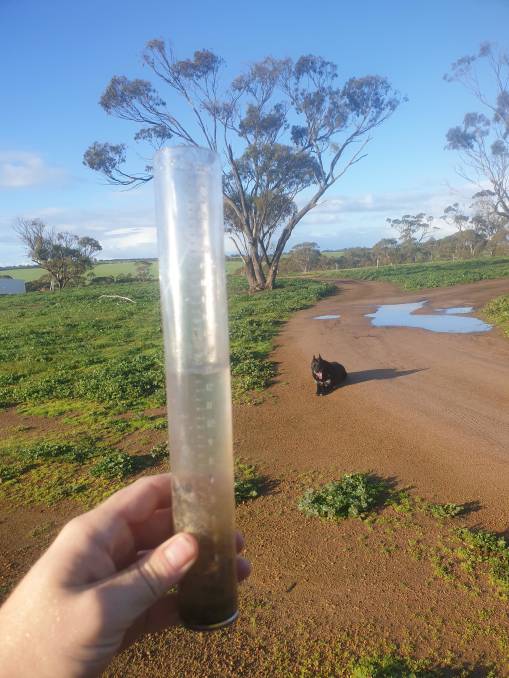 : The season has been "a bit up and down" for Jamie Spence, who farms near Borden in the Nalyerlup area. "Conditions were good and then the rain didn't stop," Mr Spence said. We were concerned about seed burst from the paddocks being too wet and one paddock never got fully sown due to the section being too much of a bog hazard. We have been contemplating reseeding up to 400 hectares but the conditions prevented us getting on the paddocks still, yet over the past few days where we thought the crop was gone there have been little shoots slowly pushing through, so the crop is looking more hopeful now. What had come up is now fully underway with a urea boost." Mr Spence said although the heavy rain had been touch-and-go for crops, it'd been great for the sheep. "The sheep have so much feed they barely leave one corner of the paddock, so overall the season is looking fairly good," he said. As of July 15, the farm had received 357mm so far for the year, with 270mm falling in the growing season, which is comparable to their yearly average of 350-400mm. "Major rainfalls were a 38mm day in early February, a 40mm day in mid-April, with three 20-30mm day events across May and June," he said. "Last year we struggled to get three events in double digits. The creek namesake of our farm has flowed over the road several times already this year, where normally it would do it once every four years or so after a once-off major storm/rainfall event." The family's enterprise comprises 65 per cent to cropping and 35pc Merino sheep, with the main crop being a mixture of hard noodle wheat, with canola as a rotation crop and some lupins for sheep feed. Mr Spence said he had a "wait and see" feeling about the season going forward. "We were having doubts about crop potential but everything is turning up green at the moment, so we're waiting to see what September and harvest brings," he said. 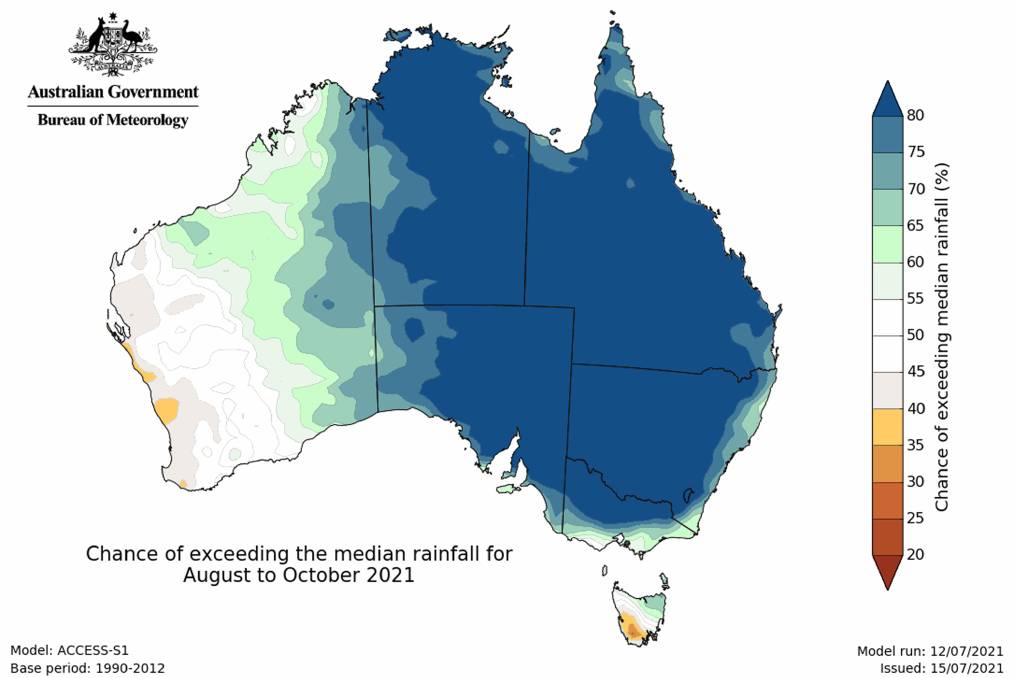 Western areas of WA have about equal chance of having below or above median average rainfall from August to October.