The Kulin community banned together to show its support for a local farmer, Teneille Crook who has brain cancer and her family, and to raise money and awareness for the illness which is rare compared to other cancers. Ms Crook and her one-year-old son Caleb are in the front row, her partner Lachlan Siviour is second from the right and far right was fundraiser organiser Alison 'Minnie' Luchessi.

TRUE community spirit was shown when a farmer from Kulin was diagnosed with a devastating illness, as the small community rallied together to show its support and help raise funds for more research.

In December 2020 Teneille Crook received the sudden news that she had a brain tumour - Anaplastic Astrocytoma grade 3.

Treatment began straight away, with surgery first and was followed by six and a half weeks of intensive radiation therapy and ongoing treatments in Perth.

Her partner Lachlan Siviour has been travelling back and forwards since, to manage the farm and also be there to support Ms Crook.

Their one-year-old son Caleb spent most of this time in Perth with Ms Crook.

The Kulin community stepped up to support the family, including helping them seed this year's crop.

Last month, the efforts of the town and support received by people from other regions exceeded all expectations when a Brain Cancer Awareness event was held to raise funds for brain cancer research.

The fundraiser was led by another Kulin farmer, Alison 'Minnie' Lucchesi and raised $23,377 on the day, with fundraising continuing.

"Teneille and Lachie were speechless and so grateful," Ms Lucchesi said.

"They only moved to town a few years ago and have been really supported by the community.

"Because they were away so much for Teneille's treatment, we found it was hard for us to help them, so we wanted to do something that would show them that they were thinking of them."

More than 130 people attended the fundraiser, which included an auction and raffles, with prizes donated from local families and businesses. 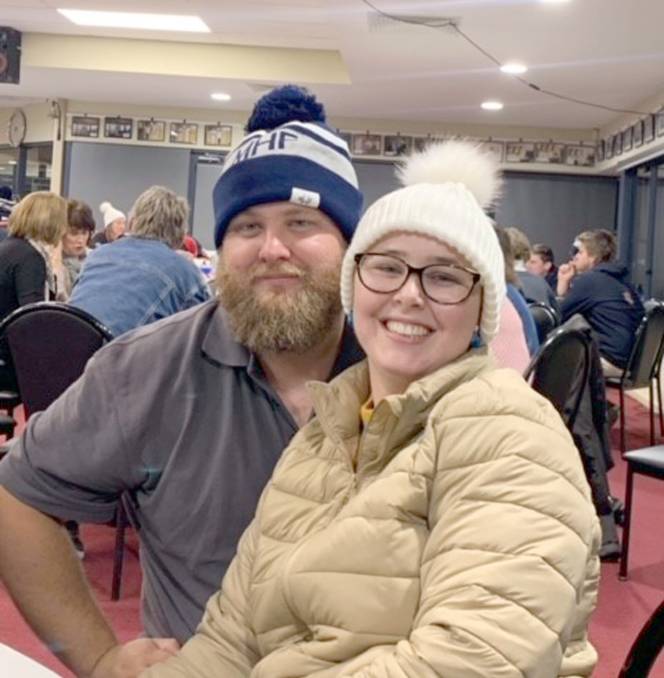 Teneille Crook and her partner Lachlan Siviour, who farm at Kulin.

"Having the support of all our local sporting groups really made this day as without all of them getting behind our beanie drive and really supporting and broadcasting the event out there, I don't think it would have been as successful," Ms Luchessi said.

Some of the items that went under the hammer were Dulux paint and tools from Kulin Hardware & Rural - Mitre 10, pork and lamb meat from the Lucchesi family, a Crown Towers voucher from Phoenix Insurance Brokers and a children's ride-on tractor from McIntosh & Son, Kulin.

One of the big ticket items was unexpectedly a Dulux mascot dog which ended up fetching more than $700, and has since been travelling around WA to help spread awareness about brain cancer.

The top-selling item was a West Coast Eagles jumper, with the meat and ride-on mower also highly contested.

"Everyone was stoked and so happy with how it went and they all loved being involved," Ms Lucchesi said.

"I think people were just as surprised as me with how much money we managed to raise and we were so proud that we managed to pull it off."

The money raised went directly to the Mark Hughes Foundation for research.

Ms Lucchesi said the idea for a fundraiser came about through a Facebook post by Ms Crook, which used #braincancerawareness and prompted Ms Lucchesi to find out more about the disease.

According to the Australian Department of Health, more research is crucial for discovering new treatment and improving the survival of those with brain cancer.

About 2000 Australians develop brain cancer every year," the department stated.

"Over the past 30 years, the number of people surviving other types of cancers has steadily improved.

"However, the survival rate for brain cancer has stayed low, at around 22 per cent."

"When I realised the lack of funding there is for brain cancer and just how much is still unknown, I imagined if I was in that position and I wanted to help Teneille and her family," Ms Lucchesi said.

During hard times, feeling supported but those around can make a huge difference, and if the past eight months has been any indication, it appears that Ms Crook and Mr Siviour have a strong support network behind them in the Kulin community.

And a group of locals even pooled their money together to give the family a gift voucher for a holiday.